Heel strikers versus forefoot strikers. This running debate has raged for decades. But recent science suggests it might be better to concentrate on making the most of your natural running style – whatever that may be. That’s where the ASICS Metaspeed+ range comes in.

Like the previous-generation Metaspeed series, the speedy new 5k-to-marathon carbon-plated running shoe comes in two flavours – the Metaspeed Sky+ and the Metspeed Edge+.

Both $250/ £225 shoes have been made with faster runners in mind. The research that informed the design was based on sub-3-hour marathon pace runners. The Metspeed Sky+ is designed to help stride runners – we think that’s a euphemism for heel strikers – to run at faster paces with more efficiency and less fatigue. While the tech in the Metaspeed Edge+ hopes to power fast-stepping cadence runners to faster times.

Both shoes feature significant changes to their first generations, too. New Motion Wrap mesh uppers, a bigger volume of springy and responsive nylon FF Turbo midsole foam that ASICS says is 20% lighter with 10% more energy return than its other foams.

ASICS has even improved the foothold with lock-tight laces that don’t loosen while you’re running. And there are some very snazzy new colourways too. The kind you have to run fast in.

The carbon plate in both shoes is there to add stability to the Metaspeed’s high-stack, low-density midsole foam. They’re designed to work with your footstrike and strider style to guide you efficiently through each step.

However, this is where the shoes differ. The plate in the Metaspeed Sky+ sits higher in the midsole, closer to the foot. That creates a more even compression across the full width of the midsole with each step and produces a high bounce.

The Edge+ carbon plate is more curved and sits closer to the ground, with more midsole foam directly under your foot. You get more targeted compression where your foot strikes the road, less overall midsole surface compression and a little more guidance for the foot from first contact to toe-off.

The stride runner-friendly Metaspeed Sky+ has the same 5mm drop and midsole stack as the first generation, with 33m in the heel and 28mm in the forefoot. The cadence runner targeted Edge+ has an increased stack height 33mm in the fore, 25mm in the rear and a larger 8mm drop.

So do these changes in the Metaspeed+ add up to a better, faster shoe? I got to put the Metaspeed Sky+ through a 10km run test and a 5km race test out at the ASICS Meta Time Trial launch in Malaga.

The first thing to note is that I’d probably consider myself a cadence runner more than a stride runner so I might be better off running in the Edge+. But we only got our feet in the Sky+.

They offer excellent instant, step-in comfort with a disappearing feel on the foot the moment you lace them up. Fit was excellent with plenty of space in the toe box, uppers that hug and support but also flex. The crinkled laces made for a good secure lockdown. Though I’ve got quite wide feet and the narrow, minimal race tongue didn’t quite wrap the top of my foot as much as I’d like.

At 205g, the ASICS Metaspeed Sky+ is marginally heavier than the original Metaspeed Sky but that’s barely noticeable on the run where they feel light, agile and fast.

I raced the 5km on very tired legs – and not a great deal of fast training – and surprised myself with a 19-minute finish. Though on both runs I felt like I had to focus to find the best footstrike to unlock the shoe’s real punch.

One big difference I noticed compared to something like the Nike Vaporfly, is that the Nike’s put you a little more up on your forefoot. Again, maybe the Edge+’s bigger drop would offer that kind of ride but the Sky+ definitely felt flatter.

On the flipside, I found the stability good for this kind of race shoe. There’s a relatively good base to run off even when you’re not moving at your fastest. Though these are shoes to lace up for going all-out, not your easy effort miles. And the heel cut off might trouble some heel strikers.

First impressions, ASICS has made a very good, capable fast race shoe that’s a small rather than giant step up from the first generation. I’m not quite sure it tops the Nike Vaporfly for all-out speed but it’s certainly one to consider for chasing PBs, interval sessions and fast training runs.

Word of warning though: You’ll want to make sure you buy the right one. And that might mean a visit to your local running store rather than buying online.

The ASICS Metaspeed Sky+ has a worldwide release date of June 14 2022. 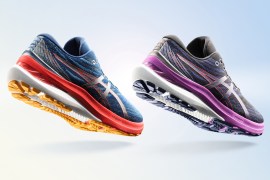