If you’re on the lookout for some new home cinema kit then you might have seen some TVs marked as having Filmmaker Mode. But what the hell is it? And do you need it? Allow us to explain…

First announced in 2019, Filmmaker Mode, or FMM, is a picture mode for Ultra HD or 4K TVs as well as HDTVs.

Developed as a collaboration between filmmakers, Hollywood studios, consumer tech firms and the UHD Alliance, Filmmaker Mode is designed to help you to watch films and TV shows at home the way that filmmakers intended. The idea is to give you a more cinematic experience without any ‘handy’ picture processing features knackering the on-screen visuals that the director and creative team spent hours perfecting in the edit suite.

How does Filmmaker Mode work?

The latest TVs have so many bells and whistles in the form of nifty features that they can sometimes work against you by changing the picture from how it was originally supposed to look.

The key thing that Filmmaker Mode does is disable motion smoothing and all those other potentially pesky video processing features, such as sharpening and noise reduction which are designed to make your picture look better (but can often make it look worse).

The goal of Filmmaker Mode is to show you the picture as the director intended you to see it. For example, sometimes the director will use a different lens or lighting for certain characters but the effect can be lost if your TV is automatically adjusting the picture for you. As well as cutting off all the TV’s automatic modes that might mess with the picture, Filmmaker Mode also preserves the correct aspect ratios, colours and frame rates to preserve the cinematic vibes.

Where can I get Filmmaker Mode?

One thing that’s cool about Filmmaker Mode is that it’s a universal standard supported by different manufacturers. It’s not just a new addition to the ever-growing list of bafflingly named features that TV makers are constantly cooking up for their own kit.

So far, Hisense Panasonic, Philips, LG, Samsung, BenQ Skyworth and Vizio are on the Filmmaker Mode train, and we expect a few more brands might climb aboard in future. Lots of TVs will feature Filmmaker mode out of the box while others may be able to to get it via a firmware update. LG and Samsung are supporting it across their entire TV lineup.

Filmmaker Mode can be activated automatically by clever metadata in the content you’re watching that triggers the TV to shift into the right mode. Alternatively, you can fire it up yourself in the settings while some models even feature a fancy dedicated button on the remote. If you really don’t want Filmmaker Mode working its magic on your picture then you can easily turn if off.

Generally speaking, filmmakers hate all those automatic features on TVs that helpfully ‘optimise’ the picture. Why? Because they often spit out a picture that looks pretty flippin’ far from what the director spent their time and effort creating.

There are lots of big names that support Filmmaker Mode including some of the best and most innovative directors working right now. The stellar call sheet includes the famously tech-savvy James Cameron. Plus legendary director and keen film preservation advocate Martin Scorsese. Also in the frame is Wonder Woman director Patty Jenkins along with Ryan Coogler of Black Panther and Creed fame. If that wasn’t enough, Christopher Nolan, Ava DuVernay and J.J. Abrams are also on board while Stranger Things maestros the Duffer Brothers are helping to represent the cinematic TV realm.

Nope, it’s a totally different thing. But the good news is that Filmmaker Mode is designed to play nice will all types of HDR, from HDR10 and HDR10+ to Dolby Vision so its doesn’t matter what HDR format you TV is packing. It also works on SDR content.

Filmmaker Mode can work with any content source you throw at it, including Blu-ray, streaming or broadcast, but keep in mind that while it works on HD TVs, a 4K source on a 4K TV would give much better results.

Is Filmmaker Mode any good?

Dotting your eyes and crossing your screens 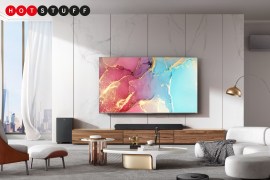