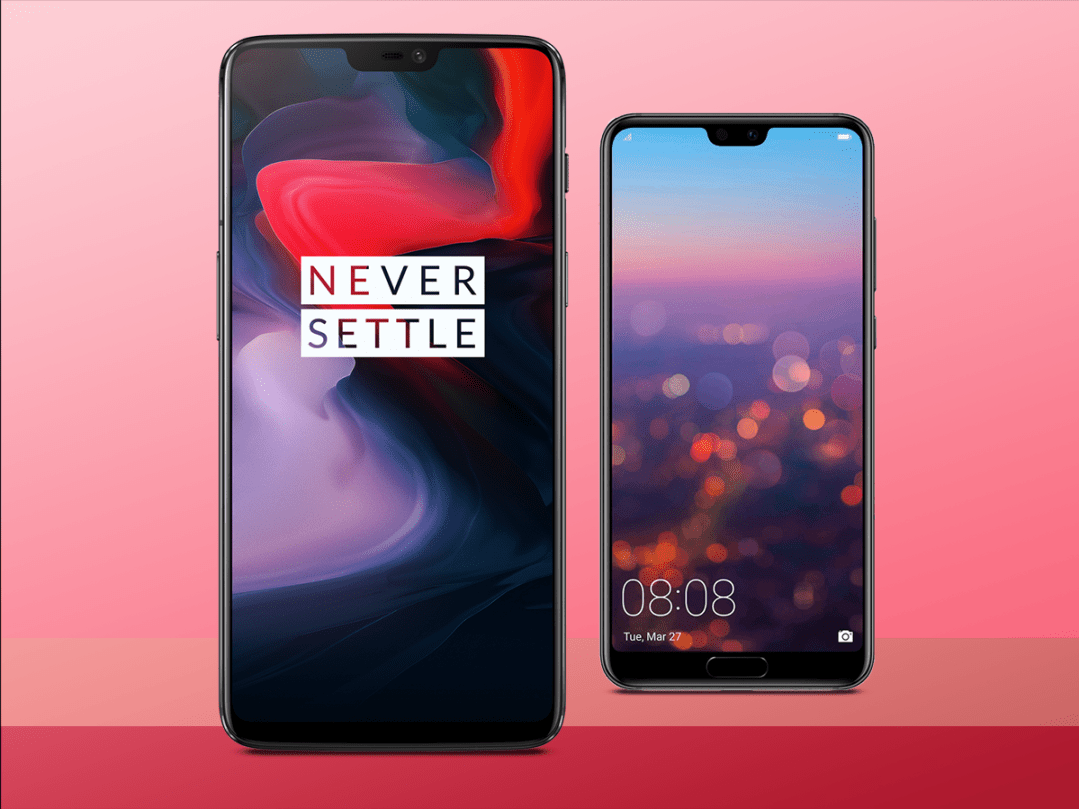 The Huawei P20 Pro made a surprise entry on our list of the best smartphones in the world, taking the top spot away from the Samsung Galaxy S9 – but here comes the OnePlus 6 to try and shake things up.

Of course, the latest OnePlus lands at just over half the price of the P20 Pro, delivering a 2018 flagship that doesn’t break the bank… at least not to the extent of many others. But the P20 Pro’s world-beating camera and incredible battery life set it apart from the pack and help justify its bulging price point.

Can it really withstand the budget-friendlier challenge from the OnePlus 6? Here’s what we think, now that we’ve reviewed both of these new handsets.

Design: Two of a kind

It would be tough to tell these phones apart from just a quick glance. Both are screen-heavy and bezel-lite from the front, both have a notch up top with the screen wrapped around the camera module, and both have glossy glass on the back.

But there are slight differences. The OnePlus 6 makes the better impression from the front, shaving off a bit of its "chin" at the bottom – that’s because the P20 Pro still keeps a fingerprint sensor there. However, the P20 Pro’s gradient Twilight backing colour blows the plainer-looking glass effect of the OnePlus 6 out of the water… but you might not like something that flashy.

Admittedly, they’re small deviations. These phones are more similar than they are different, which is why we’re calling it a draw on design.

It’s much the same when it comes to screen quality: both of these are excellent displays and both are very, very similar.

The OnePlus 6 opts for a 6.28in OLED display at 1080p, sporting a 19:9 aspect ratio and the now-popular notch cutout. Meanwhile, the P20 Pro comes in a bit smaller at 6.1in and still 1080p and OLED, with an 18.7:9 aspect ratio (and the notch). They’re both pretty clear and have great contrast, and both impress overall. But neither stands out over the other, really.

Camera: A world of difference

That’s not the case when it comes to the camera setup: the P20 Pro is far and away the better smartphone shooter, and that comes down to quality as much as quantity.

See, the P20 Pro has three back cameras, which sounds completely unnecessary at first – but how it uses them is what really makes the difference here. Between the 40-megapixel RGB camera, 8MP telephoto camera, and 20MP black-and-white camera, the P20 Pro takes dazzling snaps in good lighting and even some seriously strong low-light photos.

And the zooming options are incredible. The 3x optical zoom and 5x "hybrid" zoom both impress, giving you the ability to capture far-off images with previously-unattainable clarity. Well, at least for a smartphone. The A.I.-assisted colours are a bit overblown out of the box, but you can disable that. Overall, the P20 Pro beats the Google Pixel 2 as the best phone camera on the market today.

By comparison, the OnePlus 6 back camera setup is merely pretty good. It’s a dual-camera array with a 16MP main camera and 20MP secondary camera, both at f/1.7 aperture. Optical image stabilisation and a larger main sensor help with clarity, and in good lighting the results can be punchy and detailed.

But the overblown colours here can’t be tempered, in our experience, and some exposure issues muck things up. The image processing doesn’t seem to be quite on par – but it’s still a better-than-solid camera overall. It’s just going up against the best here.

As you’d expect from flagship phones in 2018, both of these phones have plenty of power on offer. The Huawei P20 Pro sticks with Huawei’s own Kirin 970 processor that we saw last autumn, while the OnePlus 6 goes newer with the Qualcomm Snapdragon 845.

Some benchmark tests show a bit more power at play for the Snapdragon, but it’s not enough to get picky about – not when the everyday performance is plenty speedy on both devices. The P20 Pro and base OnePlus 6 model both pack in 6GB RAM to keep things moving along no matter how crazy you get with apps, games, and multitasking, although there’s a pricier OnePlus 6 edition with 8GB. available.

Battery and perks: The Pro edge

Besides the camera, here’s another key area in which the pricier P20 Pro prevails: battery life. The hearty 4,000mAh battery pack is more than you’ll find in most flagships, and it helps Huawei’s phone last solidly into a second day with average use.

The 3,300mAh pack of the OnePlus 6 isn’t likely to go long into day two with comparable use, but it’s still very good. Neither of these offer wireless charging, however, despite the glass on the back.

They’re also similar in lacking microSD support, unfortunately. Huawei gives you more base storage to play with, though, with 128GB compared to 64GB in the entry-level OnePlus 6. You can bump up to 128GB or 256GB on the OnePlus 6 by spending a bit extra, though.

As far as added perks go, the P20 Pro includes a desktop mode that lets you plug in an external monitor for a PC-like experience – and you don’t need a separate dock accessory like the Samsung Galaxy S9.

On the other hand, the OnePlus 6 has a 3.5mm headphone port while the P20 Pro doesn’t – you’ll have to use the included adapter. Still, given the bigger battery, we’d say the P20 Pro has an overall advantage in this category.

Here’s what it all adds up to: three draws and two category wins for the Huawei P20 Pro. What that should tell you is that these phones are pretty close in a lot of ways, but that Huawei’s handset has some key advantages that help put it over the top.

You’ll find no better smartphone camera today than the P20 Pro’s, and the beefier battery and larger starting storage cache are both appreciated bonuses. On the other hand, the OnePlus 6 has a pretty good camera and a plenty-large battery – they’ll do the trick for most people.

If you’re willing to spend £799 on a smartphone, then we think the Huawei P20 Pro’s camera and other perks warrant the expense. But if that’s far more than you’re eager to invest, then the £469 OnePlus 6 won’t disappoint.

The OnePlus 6 checks most of the boxes for a flagship phone in 2018 at hundreds of pounds less, and we’d agree that it’s probably the smarter pick for a lot of prospective phone buyers out there. But it’s a testament to the P20 Pro’s camera and other benefits that we’d still advise shelling out for Huawei’s best-ever phone if you can spare the expense.