Home / Features / Fit parade: the 11 best tips and tricks for your new Fitbit 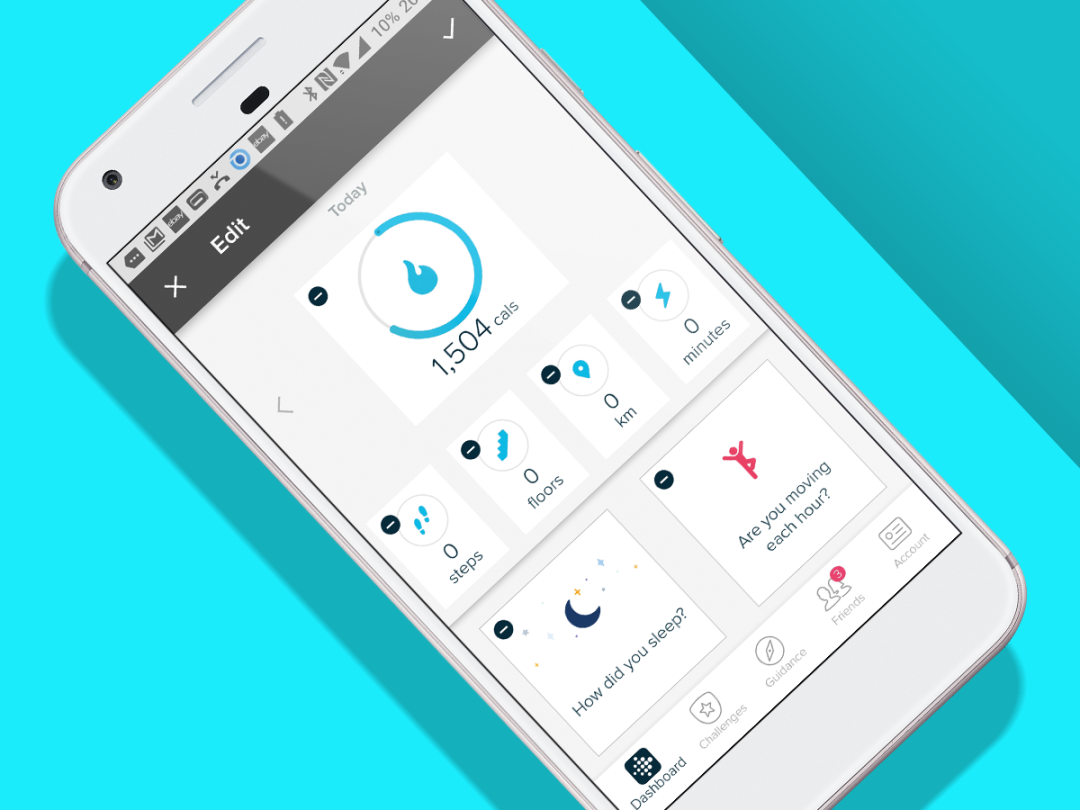 Fitbits have been around almost as long as iPhones – since 2009 to be more precise.

The world has changed a lot since those days. Fitbit is no longer just a way to get you off your backside by obsessing over your step count (although they’re pretty good for that too).

It’s a whole lifestyle platform that can get you to retrain your brain to think, and be, more healthy in all sorts of ways. Here are the tips and tricks you’ll need to get the most out of your Fitbit tracker, and the great software platform that brings them together.

Add friends to boost the fun

Using Fitbit can be fun on its own, but it’s much better when you get a friend involved – if only to cruelly destroy their step count so you can mock them remotely.

By this point you may well already have a bunch of mates who have a Fitbit account, and the app lets you know this too. In the Friends section, tap the “+” button and at the top of the screen you’ll see any phone contacts who have been on Fitbit at one point.

There are also FaceBook and email tabs, to let you give friends a nudge even if they don’t have Fitbit already. If they complain they don’t have a Fitbit, remind them their phone might be able to use the tracking without Fitbit hardware.

Use Fitbit with just your phone

Fitbit works best when you use it with an actual Fitbit tracker, like an Alta HR. But a bunch of phones can use something called MobileTrack.

This is where the Fitbit app uses your phone’s accelerometer to count your steps instead of a fitness band.

When setting up initially, you’ll need to pick the “no Fitbit yet?” option. Don’t see it? It may be that your phone isn’t compatible with MobileTrack.

To see if your phone is on the list, head here. Or, y’know, download the Fitbit app and see.

Fitbit has perhaps the most customisable interface of all the fitness apps around. You can zap any element of the home screen.

Don’t like calorie counting? Blam. Your Fitbit doesn’t count climbing up stairs? Gone in a tap. The benefit of doing this is that when you stroll into the app to check out your stats, it’s as clean and clear as it possibly can be.

To prune Fitbit, just scroll down on the home screen then tap the Edit button. You’ll see a little “-” button on each info block.

Once you’ve picked the ones you want to get rid of, just press the tick button at the top-right of the screen.

We often say fitness trackers that base their stats on an accelerometer have no hope of being as accurate as a good GPS watch. Still, Fitbit does let you radically improve the results you’ll get from, say, a Fitbit Alta HR.

You can set your walking and running stride lengths manually. As standard, the app extrapolates it from your height, which doesn’t account for variables like freakishly long legs or a… generously proportioned torso.

That is, unless you have a watch with GPS like the Ionic, which updates your stride based on your actual distance travelled every time you go for a run or walk.

Need to go manual? You’ll find these fields down by the bottom of the Advanced Settings menu. But how do you work out your stride length? There’s no exact science to this as your stride length will vary depending on a bunch of factors.

However, you can either place a marker on the ground, then run/walk, say, 10 steps and chart the distance with a tape measure. Or find somewhere that has a 100m track and count how many steps it takes you to cover the distance, then divide by that distance. Maths.

Fitbit is not an ego monster – it knows you see other apps on the side. They can all be friends, though, if you like.

By sync’g up Fitbit with apps like Strava or Map My Run, any extra steps or activity you “collect” while going out for runs with these apps gets sucked into your Fitbit total too.

Exactly how you sync services varies between apps, though. Your best bet is to simply search for the name of the service and “Fitbit” in your browser. Good ‘ole Fitbit has written help pages on its website for all the major partner apps.

Get yourself a weight loss plan

Fitbit has hidden parts that you won’t find until you dig a little deeper – it’s much more than just a step tracker.

Food plan making is a part you’ll find in the Settings menu. It asks you how much weight you want to lose, or gain, and then sets you up with a calorie deficit or excess to aim for. And it lets you know how long the dreary trudge to your ideal weight will probably be.

Sadly, Fitbit doesn’t make removing doughnuts and chocolate from your life any easier.

Try out Fitbit Coach for free

There are actually two sides to Fitbit’s software: the step-counting tracker and Fitbit Coach. This is the digital equivalent of a personal trainer, featuring almost 100 guided workouts and full-on programs.

Head to the Bodyweight Workouts section in the Fitbit Coach app and you’ll find ten teaser sessions. These have pretty gym-tastic names like Mudder Mayhem and Runtensity.

There’s also the much less imposing, and shorter, “7-minute workout”. It’s no breeze, mind, with 12 different exercises packed in. It’ll be a good test for your Fitbit’s HR sensor, if it has one.

When most of us go for a walk, it’s to the shops or a local park, where the most exciting sights might include funny-coloured dog’s mess or some particularly amusing graffiti on a tree.

Fitbit offers an alternative, though. “Solo adventures” are a way to get you a way to get motivated to move more. Even when it’s cold out and the park seems more poo-strewn than normal.

Solo adventures take you through a virtual hike as you go about your day, unlocking panoramic pics and fact-lets about the journey.

Right now, you can only choose between a few different routes in New York and Yosemite national park, in California. You’ll find them in the Challenges part of the app, but no energy drink-pounding competitiveness is required here.

Fitbit lets you track the food your eat, as well as your activity. You just scroll down on the homepage and tap on the “what have you eaten today” button.

But working out how many calories there are in every little thing you eat gets old quick. Fitbit lets you scan barcodes of food packages to take some of the effort out. It even works with own-brand supermarket stuff.

You then simply tell Fitbit how much of it you ate and you’re done. Yes, all of it – don’t sound so incredulous, Fitbit.

Fitbits, particularly the smaller bands, have an annoying habit of falling down behind cupboards or finding a home in a sofa’s cracks.

Fitbit’s official advice for device-finding is basic, boiling down to “look near your laundry basket”. Luckily, there’s also an app that can help.

Finder for Fitbit (Android, Free) and Find my Fitbit (iOS, £5.99) use the Bluetooth signal strength of your Fitbit to determine how close it is to your phone.

You can use it like a Fitbit divining rod. It’s not going to work if your tracker runs out of battery, but one of the joys of a Fitbit over, say, an Apple Watch, is their long-lasting batteries.

The wonderful world of IFTTT (if this, then that) lets you unlock a load of neat new Fitbit-related features. And you can try them just by downloading the IFTTT app and selecting one of the many pre-made applets.

Some of them sound sensible, perhaps a little too sensible. Such as one that logs your Fitbit steps progress in a Google doc. Others are downright odd, like one that sends an “insulting” phone call your way if you don’t meet your steps goal by 10:30pm.

Whatever gets you moving eh? You can also create your own applets to, for example, control your smart home gear based on your Fitbit activity.