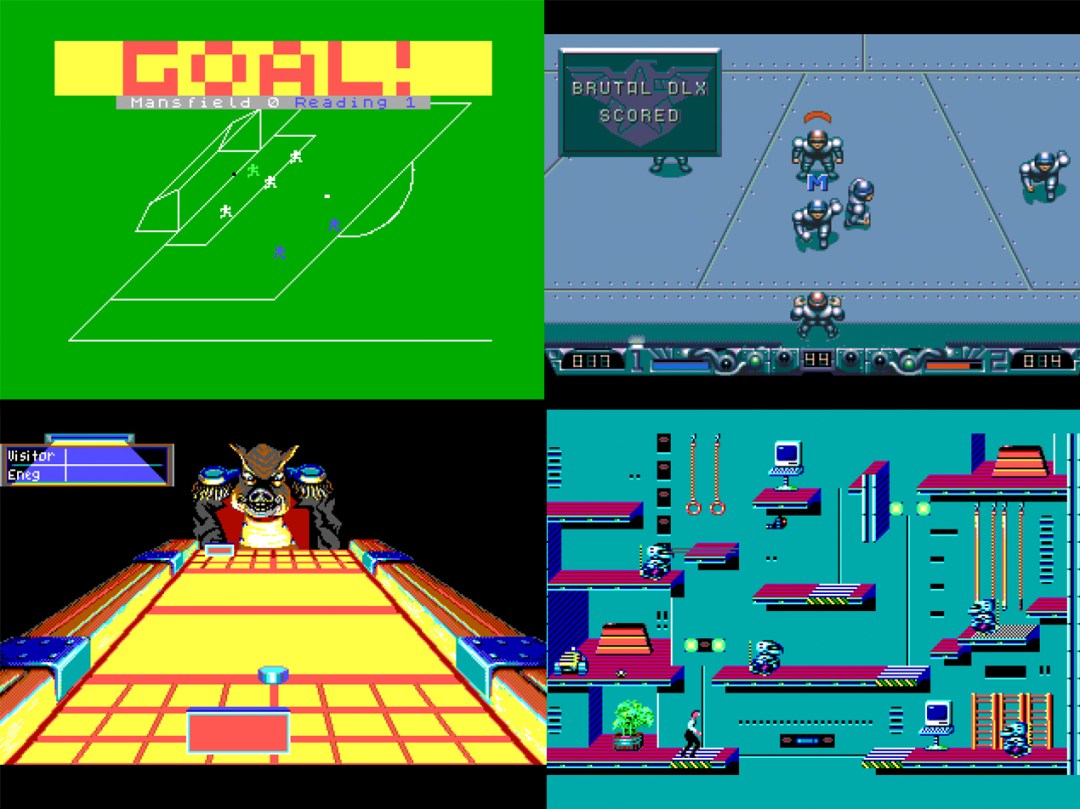 We don’t miss the days of DOS. Maybe we’re a bit lazy these days, but we’d sooner click an icon to launch an application or open a document than faff about with the command line. But we do miss some of the games — classic titles infused with imagination and magic that’s sometimes missing from modern fare.

Fortunately, Internet Archive recently unveiled a massive online MS-DOS games library, with over 2000 titles to choose from. That’s a pretty big number, so Stuff donned its retro hat, put some Tears for Fears on the stereo, and whittled down the list to a handful of titles that still play well, work nicely in the browser, and provide insight into how PC gaming was in the old days. (Initially, very purple and cyan.)

Note that any modern browser should do, but Firefox seems to work best.

Before Sports Interactive’s management sim welded itself permanently to millions of PCs, an entirely different Football Manager was published by Addictive Games. Created by Kevin Toms and his beard, the game was basic (and, originally, written *in* BASIC) with curious quirks, such as your team’s abilities being randomised every season. That doesn’t stop it being oddly compelling even today, as you aim to get your club out of the old fourth division, and watch tiny stick figures do their thing in match highlights, on pitches with comically massive goalmouths.

Peter Jackson’s happily spent years stretching out slimline novel The Hobbit to something like a billion hours of cinema, but in the 1980s, Veronika Megler and Philip Mitchell squeezed it into home computers in the form of a text adventure. This was still the early days of interactive fiction, and so the parser was limited, and the locations few in number. Even so, the game incorporated surprisingly advanced concepts, including roaming NPCs that took their turn after the player. This added randomness to what would otherwise have been a very linear journey on repeat plays, although it caused problems if a mission-critical character was bludgeoned to death off-screen by an irate orc before you got the chance to meet them.

The premise might be that Jumpman is a bomb-difusing expert, trying desperately to stop chunks of Jupiter from being blown up, but this title initially looks like nothing more than yet another me-too 1980s single-screen platformer. But Jumpman takes its few basic components — platforms, ladders, ropes, robots, roaming bullets — and keeps flinging them at you while shaking things up. In one level, robots might remain stationary until you grab a bomb, only to zoom to new locations; elsewhere, platforms might vanish as you move about. It’s a smart, hugely playable game; and if you like it, check out modern incarnation Jumpman Forever. (Note: for the game to run fast enough, you’ll need to hit Ctrl+F12 a bunch of times first.)

Well before you could live vicariously through a Sim, Alter Ego enabled you to become another person through your computer. However, this DOS game was a very much more serious affair, based on psychological research, and written by Peter J. Favaro, Ph.D. The game literally starts in the womb, before progressing through stages of life, and how you respond to questions dictates your fortunes. There’s humour in the game, but also darkness — drinking fluids found under the sink as a child will not end well. Sadly, the rarer female version isn’t yet on Internet Archive, but the male original is one of the most fascinating slices of retro gaming around.

By the middle of the 1980s, the allure of text adventures was starting to wane, and there was a sense text parser systems were too limited and — for most gamers — a little bit dull. Ron Gilbert’s answer was the SCUMM game engine, which essentially brought into being free-form point-and-click adventures.

But it’s the madcap story and unique characters that really shine in Maniac Mansion, as a trio of chums attempts to rescue a friend from the clutches of a mad scientist and his very weird family. You knew on discovering a green tentacle who aspired to be a rock-and-roll musician that gaming would never be the same again.

Purists might argue that you should only ever play the original Impossible Mission, but that’s not on Internet Archive, and we really like the sequel — so there. The game involves you, as a super-fit somersaulting secret agent, trying to prevent Professor Elvin Atombender from blowing up the world, for Evil Bad Guy reasons. You infiltrate his tower fortress, avoid his deadly droids, and search objects to find security combinations. Get the right numbers and you can record a musical sequence on your tape deck; get six different ones and you access the central control room, giving you a fighting chance to prevent the baldy mad scientist from very much wrecking everyone’s weekend plans.

*Mice.* They’re great for moving a cursor around the screen and clicking menus and icons, clearly, but it took developer Christopher Gross to look and one and think: ‘air hockey puck’. And so the game the mouse was created for, Shufflepuck Café, came into being, with you facing off against a seriously motley crew of miscreants. Ideally, we’d be pointing you at the superb Mac original, but the DOS port still does the business as you smack the puck at drunkard alien playboy lizard Lexan Smythe-Worthington, and cheating telekine Princess Bejin, who occasionally floats the puck to the side of the table, before aiming it at your face.

Before Prince of Persia headed to 3D on modern consoles and then to movie theatres, wearing Jake Gyllenhaal’s face, it was an elegant, considered Jordan Mechner creation for Brøderbund. Much like predecessor Karateka, Prince of Persia aimed to bring a cinematic feel to home computers, and it’s chock full of fluid animation and cut-scenes. It’s similarly thoughtful too — Prince of Persia might look like a platform game, but it’s really a slow-burn puzzler, with you figuring out how to carefully pick your way through a trap-filled dungeon, without getting horribly impaled on spikes or a guard’s sword.

It wasn’t the first 3D shooter, but Wolfenstein 3D defined the template for pretty much everything that followed it. Spy William ‘B.J.’ Blazkowicz wants to bring down the Nazis, although the idiot’s gone and got himself captured. You must therefore help him escape from his cell, and work his way to each floor’s elevator. In his way: lots of Nazis to shoot, vicious dogs to shoot, and a big boss to shoot — you get the idea.

In fact, for a 1992 game, it’s surprisingly bloody, with death screams aplenty. It’s a bit surreal, too, notably with the suspicious number of chicken dinners peppered about the floor, ready for you to munch. (These Nazis wouldn’t be picking up many points on Come Dine With Me.)

‘Ice cream! Ice cream!’ That’s what the players of Speedball 2 hear all the time from a nagging, insistent vendor in the crowd, but they’ll probably need some after getting their teeth punched out in this violent futuristic take on handball. Naturally, you start out at the bottom of the heap, managing the notoriously rubbish Brutal Deluxe. But be shrewd on the transfer market, pick up loads of coins in-game, and try not to concede too many goals, and you’ll swiftly climb the ranks. That is if your hands don’t rebel by being forced to use QAOP controls.

OK — one extra entry, just because. In 1982, Bruce Artwick (the man behind the hugely successful Flight Simulator series) briefly went pinball crazy, and the result was Night Mission, a fast and furious digital table. Next to the likes of Pinball Arcade and Zen Pinball, Night Mission of course looks positively archaic, but this update for DOS overhauls the very rough visuals of the original and retains its breakneck gameplay. The physics is a tad suspect, but we’d argue Night Mission is the best retro ball-spanger around.

READ MORE: All the hottest stuff, on one scorching page