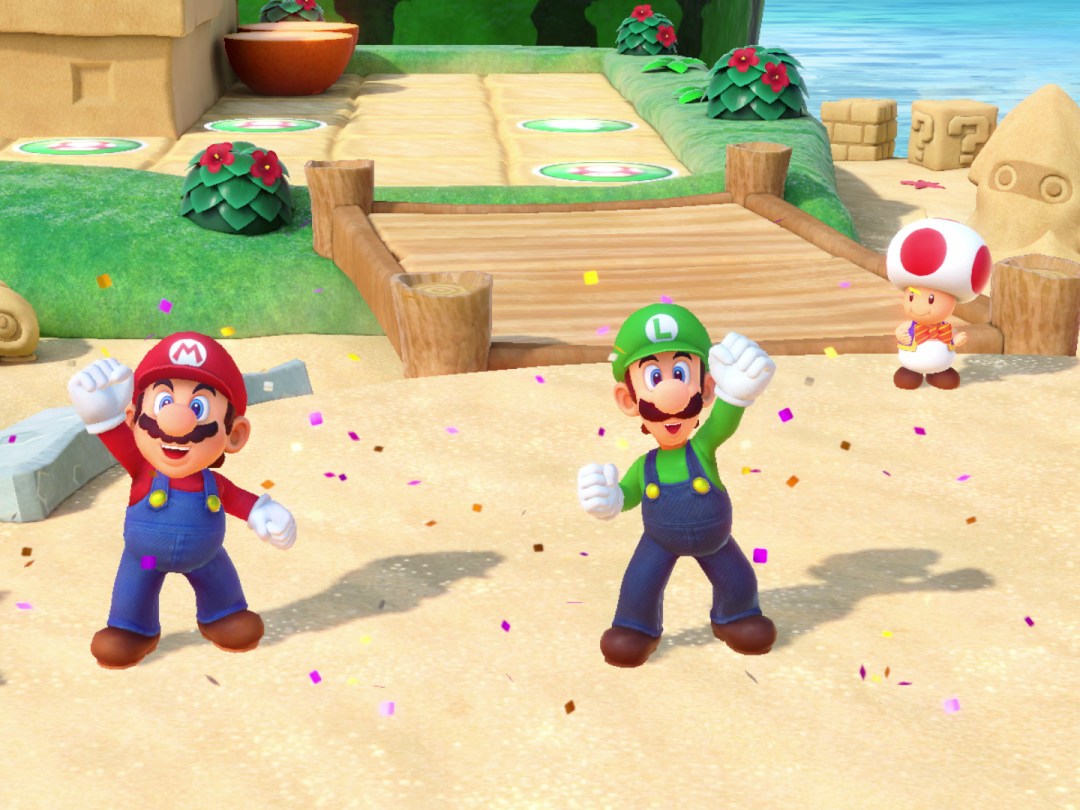 The Nintendo Switch is hardly deprived of crowd-pleasing multiplayer games.

Fancy a bit racing? Mario Kart 8 Deluxe is a bona fide classic of the genre. Irrepressible urge to punch your mate square in the nose? Avoid the bloody consequences by roughing him up in Arms instead. Unwavering confidence in your digital sushi-plating prowess? Apron up and get everyone round for some Overcooked 2.

But, come Christmas Day (don’t pretend it isn’t on the horizon), there’s only game to rescue you and your loved ones from mince pie malaise: Super Mario Party.

With a whopping 80 new minigames that are easily grasped by gamers and slightly baffled grandmothers alike, as well as online play for the first time, Super Mario Party marks a refreshingly back-to-basics return to form for the series. And Toad’s Rec Room, another new mode that lets you play tabletop games across two Switch consoles by joining them together, is Nintendo at its boundlessly creative best.

Get this party started

The Mushroom Kingdom residents are a competitive bunch. On a rare day off from abduction/rescue attempts, a party is proposed to determine the greatest of them all.

When you start the game you’ll choose one of the 20 playable characters and form a party of four, high-fiving your contemporaries before selecting from a variety of game modes.

The meatiest of which, as ever, is the Mario Party board game, which sees players roll a dice to move their character around a board full of power-up prizes and progress-halting hazards. You can play against one another, or select Partner Party for a 2v2 team version. The overall aim of the game is to nab more stars than everyone else, but every couple of minutes you’ll be hurled into one of the many minigames to fight for coins.

What’s great about Mario Party is that nobody can afford to get lazy when they’re on top, as a couple of bad rolls or an unfortunate run-in with Lakitu can see that lead snatched away very quickly. Plus, after everyone’s final turn a host of bonus stars will be divvied out, so play your cards right and you really can snatch victory from the jaws of defeat.

New to Super Mario Party is River Survival, a co-operative mode that tasks you and your pals with rafting down a river, sections that are again interspersed with different minigames that you initiate by popping a balloon. Each player’s Joy-Con becomes an oar, and you have to work together to make sure you don’t miss one.

If those modes sound like too much of a timesink, you have the option to play any unlocked minigame in Free Play, or compete in a mini Mariothon tournament.

If you’ve played a Mario Party game before, then you’ll know that they’re always stuffed to the brim with minigames of varying quality, and it’s no different with the Switch’s debut entry.

Rarely for a game on Nintendo’s hybrid console, Super Mario Party can’t be played in handheld mode. You’ll need the machine to be docked or in its tabletop form, with each player taking one Joy-Con. Some games only require button presses and the stick, while others utilise motion controls and, pleasingly, the too-often ignored HD Rumble feature.

Take Sizzling Stakes, for example. In this game you have to fry off a cubed-shaped steak, flipping the pan each time the Joy-Cons’ subtle rumbling lets you know you’ve cooked a side. Much like the fishing minigame in Super Mario Odyssey, Rumble Fishing requires you to wait for the strongest feedback from the controller before yanking up your rod.

There are naturally one or two duffers in the selection, but they don’t hang around long enough to poop your party. Concentrating on the positives, I like Gridiron Gauntlet, where each player has to avoid being tackled by Chargin’ Chucks. It gets pretty hectic and, like the best party games, is something everyone will be utterly useless at after a couple of drinks.

Other personal highlights include Soak or Croak, in which you have to blast players out of a ring with a water gun, and Net Worth, a team game where flicking the Joy-Con flings fish of differing values from your net into a paddling pool. A special mention should go to Pie Hard (you can probably work that one out from the picture above), and there’s even a football game that made me wish Nintendo would get a move on and give us a new Mario Strikers for Switch.

If abandoning all dignity is what you’re after, head for the Sound Stage mode. Here, players compete in wacky, quickfire rhythm-based games in the WarioWare mould. You might be skewering fruit to the beat, or trying your very hardest to keep up with Princess Peach’s increasingly demanding disco routines as a crowd full of delirious Toads clap along. Anyone can play – anyone can look stupid.

If the bulk of Super Mario Party is enjoyable, albeit fairly standard, minigame fare, Toad’s Rec Room is where Nintendo really shows off.

To play the games featured in this mode you’ll need a pair of undocked Switches. By joining the two tablets together you can play tabletop games that take place over both displays. In Banana, Split, you have to rotate the two systems until you can see two halves of a banana align. It sounds simple, but as the difficulty ramps up your attempts will be wonky enough to give the European Union’s banana approvers nightmares.

The star of the show, though, has to be Shell Shocked Deluxe. It’s a two-on-two tank shooter that you create the arena for by shifting the meeting point of each Switch, allowing for numerous battlefield arrangements. When the game begins, you can actually drive your tank from your screen to your opponent’s, with the black border separating them acting as a kind of no man’s land that makes you hilariously vulnerable to oncoming projectiles.

It’s genuinely innovative stuff, and it’ll be fascinating to see how Nintendo experiments with the tech in future titles. It’s just a shame that both players will need a copy of Super Mario Party to experience it here.

There’s gonna be a party all over the world

While Super Mario Party can be played in single-player, it’s not something you should be be doing.

Make no mistake: this game is as its best with a load of friends or family fighting for sofa space, but if you do find yourself without company, can can play online for the first time in the series.

Although it’s limited to the Mariothon mode, this will enable you to play every minigame against people from all over the world. I was unable to access the servers prior to launch, so check back for un update once they’re up and running. Just bear in mind that you’re now required to sign up for the recently launched Nintendo Switch Online service if you want to get stuck in.

Super Mario Party is yet another brilliant addition to the Switch’s burgeoning game library.

There’s something for everyone in the 80-strong minigame offering, and while we’re yet to test it out, the addition of online play means you don’t need a roomful of guests to party with the plumber and co.

The games themselves are basic, but that’s the point, and I’d wager that a Mario Party board game has Monopoly beaten any day of the week. Add to the generous helping of content that clever Toad’s Rec Room mode, and this is the strongest Mario Party package in some time.

My advice? Play as Waluigi. He has the best running animation, and you won’t find a cockier champion in the Mushroom Kingdom.

Mario Party has found the perfect home on Switch

Minigames as fun as ever

River Survival is a fun way to play