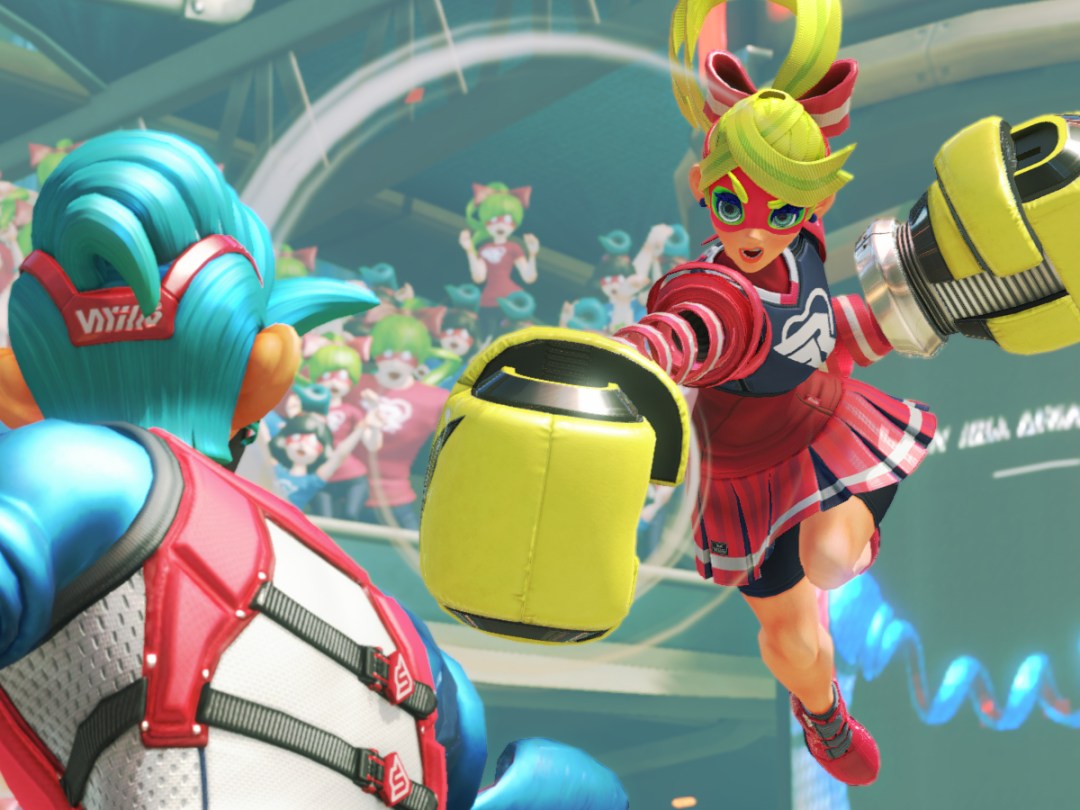 Your best mate? They deserve a slap. Your know-it-all in-laws? A swift uppercut to the chops. That tight-fisted clown you call a boss? All of the above.

Social niceties might dissuade this kind of violence, but Arms has no such qualms. An all-new fighter for Nintendo Switch, it sees you unleash your inner Anthony Joshua by swinging around a pair of Joy-Con controllers. Think Wii Sports’ boxing, only bolder, brighter and with an anthropomorphised Flubber as one of the fighters.

It’s an incredibly sweaty and satisfying affair for both casual brawlers and hardened beat ‘em up fans. And if it can’t quite hit the knockout heights of Mario Kart and Splatoon, it’s comfortably one of the best games for Ninty’s new console. Because who doesn’t fancy the chance to smash their nearest and dearest into oblivion?

A different kind of brawler

Like anime and Hornby trains, fighting games are a quaint niche of nerdery that can be nigh-on impenetrable to outsiders. Rather than take on the likes of Street Fighter V, Tekken 7 and Injustice 2 in a straight up face-off, Arms aims to do something completely different.

Each of its combatants is blessed with a pair of extendable fists that you pummel away with via your own two paws. So when you throw a curved right-hander, the Joy-Cons pick up this movement and translate it onscreen in fantastical form.

Until UFC gets really extreme this is the closest you’ll get to strapping a rocket launcher across your knuckles. And yes, the experience is every bit as riotous as that sounds. While you can button-bash your way through a championship using a pad or with the Switch in handheld mode – just as you took on Calamity Ganon in Breath of the Wild – that’s kind of missing the point. From the way you can arc your punches to the simple thrill of leaning into a jab, Arms is most joyous when you’re feeling your way through its motion controls. Plus, we already mentioned the whole uppercut-your-family-members thing.

Since motion controls naturally lose you something in the way of finesse, especially when it comes to movement, Arms‘ mechanics are deliberately simple. Each character can punch, grab and block their opponents, and that’s the case whether they’re wearing a giant wrecking ball or a confetti blaster for a weapon.

Want to avoid getting smashed into oblivion? You’ll have to think your way through a fight, figuring out the most effective way to slay your foes without leaving yourself open to a devastating counterattack. With such long limbs to fling around, slinging a punch commits you to an offense in a way that a quick spin kick in Tekken doesn’t.

While Arms‘ mechanics allow for a surprising amount of depth and nuance, the same can’t be said for its roster of fighters. To its credit, Nintendo hasn’t done a Smash Bros here and chucked a load of classic characters into its latest franchise; there’s not a dungaree-clad plumber or effervescent princess in sight.

As with Splatoon‘s Inklings, the vibrant likes of Spring Man, Master Mummy and Helix are meant to take their own places up amongst that pantheon of greats. That’s a big ask for any game, and Arms isn’t quite up to the challenge. Just think of the stuff that elevated Overwatch from ‘fun online shooter’ to ‘cultural behemoth’: the whip-smart voice acting, the hilarious emotes and the neat little touches that littered its many maps.

Arms doesn’t share the same attention to detail and this is most obvious in its arenas. Ribbon Girl’s Ribbon Ring is a generic dancefloor, the cars that litter Twintelle’s Cinema Deux don’t explode no matter how hard you pummel them and Min Min’s scrapyard just feels like a great big dustbowl. So while you’ll have a blast striding up and down the stairs of Ninja College and bouncing around on the trampoline that’s slap bang in the middle of the Mausoleum, you don’t get the same thrill with every face-off.

Although Nintendo is promising new fighters, arms and stages as free DLC, the game could have done with a few more of them at launch to keep you itching for just one more go. Better yet, a proper story mode to flesh out its characters would have gone down a treat.

Pick up and get beat down

As it is, Arms occupies your time with its Grand Prix mode, online competition and a few fun added extras. Grand Prix mode is where you’ll really earn your stripes, as it sees you battle against the game’s entire roster either alone or with a mate via straight-up fisticuffs and some even more zany alternatives. Both of which are tough going even at moderate difficulty levels.

You see, for a game that stars a robot cop and dog duo, Arms is more than happy to hand you your arse on the regular. This isn’t like Mario Kart, where the brake button may as well not exist – you’ll have to keep moving round an arena, learn to time your punches and adapt your choice of weaponry mid-match in order to reign triumphant. Oh and figure out how best to slam your foes through a giant basketball hoop, play volleyball with a giant bomb and smash your way through a fist-friendly target gallery.

Online play is divided between Party Match and Ranked Match modes, where in the former you can lose with no shame and the latter you’re very much aware of your place in the worldwide pecking order. If you’ve played any of the Arms Global Testpunch demo, then this is very much more of the same. So far, matchmaking is slick, the servers are stable and you get that added thrill of destroying a real-life human being somewhere on the other side of a broadband cable. Whether a community forms around the game will be very much key to its ongoing success though. Single-player isn’t going to entertain anyone for too long.

Of course, even online play can’t compare to going toe-to-toe with friends and foes alike – assuming you’ve got a spare pair of Joy-Cons kicking around at home. If that’s not the case, you’ll have to stump up another £70 to get the best out of Arms and have you both playing with motion controls. You see, with the right kit, Arms‘ fun factor rockets through the roof. You’ll cackle maniacally as you let rip with a well-timed Flurry Attack, and howl in despair as the same fate befalls you.

While Arms doesn’t have an equalising force as all-conquering as Mario Kart‘s Blue Shell or Super Smash Bros‘ Hammer, it does its best to test your reflexes with a never-ending parade of shifting scenery and powerups. Even with half a health bar’s lead over your arch-nemesis, you can’t afford to get too triumphalist. Despite the mighty strong temptation.

Arms‘ physicality is intoxicating in a way that you just don’t get from sitting around on a couch and twiddling a pair of control sticks. When you’re going flat out in the midst of a battle, it’s easy to throw your punches with enough force to actually break a sweat. While it’s not intense enough to replace a proper workout, you can happily top up your Fitbit stats in a half-hour Arms session. And with any luck you’ll get the added satisfaction of having reigned supreme as the king of punching thin air.

Strip away its motion controls and Arms is a fun but forgettable affair, albeit one that you can carry wherever you please thanks to the Switch’s portable wizardry. With a pair of Joy-Cons clasped in your hands, it’s a different game entirely, becoming one of the most immersive fighters we’ve ever played and a great big sugar rush of cartoonish combat. There’s just no topping the experience of watching your opponent flail away in person as you jab, swipe and smash your way to victory.

Even it does lack a bit in the way of polish, Arms still has more than enough charm to rank as one of our favourite games for Nintendo’s new console.

Arms ain’t perfect, but its motion controls make it a total blast for multiplayer