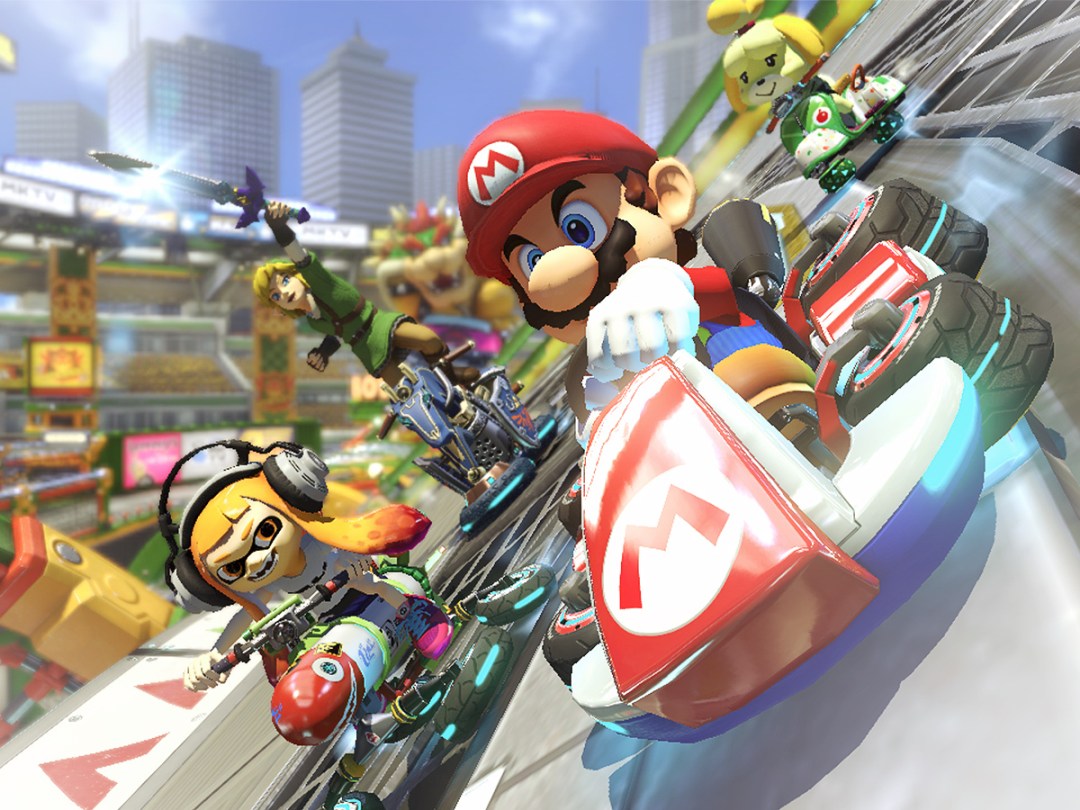 There are two types of people in the world: those who’ve played Mario Kart 8 already and those who have not.

If you belong to the former group, then take pity on the latter. For they have never conquered Mount Wario, been chilled to the bone by Luigi’s ‘death stare’ and seen first place smashed away from them by an ill-timed blue shell.

OK. Life is a little more complicated than that: some people might not have bought Mario Kart 8‘s superb DLC as well, or experienced the high-speed thrills of 200cc mode. Enter, then, Mario Kart 8 Deluxe, the ultimate edition of this former Wii U racer.

With a whopping 42 characters and 48 courses, it’s a veritable feast of propane-fuelled action that comes with a brand new Battle Mode and several other tweaks for Nintendo Switch. Could anyone resist such a smorgasbord of technicolor delights? Of course not.

Even though Mario Kart 8 was the Wii U’s best-selling game, that console was far from a commercial phenomenon. So most people who pick up a copy of MK8D are going to be coming to it with an absolute wealth of racing to be getting on with, and boy oh boy are they in for a treat.

MK8 was and is a marked step up from the so-so Mario Kart Wii. Not just because of its vastly superior HD visuals and character animations that bring each chase towards the finish line so deliriously to life. The whole game is that bit more refined and tactile, rewarding the player who can powerslide furthest or manage their items so they don’t get caught out by an errant green shell.

Key to this is the sheer variety of courses Nintendo has cooked up here. From speeding up the water-soaked scenery of Shy Guy Falls to darting between airplane landing gear in Sunshine Airport, you rarely feel as though you’ve seen the same track before in a slightly different guise.

On top of those brand new tracks, there’s a whole host of revamped classics including Yoshi Valley, Baby Park and Tick-Tock Clock. Plus, you get several more offerings based on other games from Nintendo’s vast catalogue such as F-Zero‘s Big Blue, The Legend of Zelda‘s Hyrule Circuit and Animal Crossing‘s… Animal Crossing.

So yeah, that’s quite a lot of racing to be getting on with – either by yourself or with a gang of mates in tow – and almost all of it is totally fab. Especially if you’re playing up to speeds of 150cc, i.e. the ones that were originally included in Mario Kart 8. The top 200cc speed, which was added in post-release, is enjoyably challenging but sees you bombarded with a near-constant array of weaponry and breaks some courses by seeing you glide through ferris wheels and finish line signs.

Also, I’m morally opposed to a Mario Kart game mode that forces you to use the brake button.

Better than the Wii U › Nintendo Switch hands-on review

The same, but prettier

Of course, if you have already bagged yourself gold cups on all these courses then there is considerably less new stuff to contend with. Nintendo hasn’t cooked up any fresh tracks for MK8D and the only characters of note to arrive in the game are King Boo, Bowser Jr and the Inklings from Splatoon.

Yep, the barrel has been well and scraped for this ‘Deluxe’ edition. You can see that in its superfluous tweaks to racing so that you can now hold two items at once instead of one, grab a pink Ultra-Mini Turbo boost if you drift for long enough and better cater for absolute newbies with a new Smart Steering mode. While none of these changes do anything to spoil the game, they don’t enhance it in any substantial manner either.

An infinitely more significant addition is the Switch’s silky smooth 720p portable mode, which enables you to swerve round Rainbow Road wherever you damned well please. No matter how great the temptation, don’t dip into this thing on your lunchbreak. There is no such thing as ‘one quick go’ at Mario Kart 8 Deluxe.

The Legend of Zelda › Breath of the Wild hands-on review

Really the best reason to get Mario Kart 8 all over again is for the multiplayer hijinks, and thanks to a revamped Battle Mode a large chunk of these shenanigans will be totally new.

If you know Mario Kart then you’ll know that its Battle Mode has long been a total delight. Until Mario Kart 8, that is, when bespoke, compact battle courses were replaced with sprawling tracks from the main game that were infinitely less fun to contend with. Why? You could tear around a place for ages without actually bumping into an opponent.

That’s all gone out of the window with MK8D, which introduces eight bespoke battle courses to play over five modes. Naturally the best of these is Balloon Battle where you aim to protect your precious collection of three inflatables and pop those of your foes, but the new Renegade Roundup is a right old hoot, too.

Cops and robbers done Mario Kart style it sees you attempting to round up a team of rogue racers or escape from their Piranha Plant-enabled clutches over several frantic minutes. Sounds like a return to form, right? Well, barring a disastrous performance you’d be right in thinking so.

Battle Mode is certainly good fun in local multiplayer with vulgar recriminations soon spewing forth from the moment a balloon is first popped. And while the new courses are all much of a muchness, they do a good job of piling players on top of each other so that chaos is guaranteed.

Opinion › The Switch will bring the glory days back to Nintendo

So MK8D in a nutshell? Nintendo’s kept the original’s many good bits and gotten rid of its few missteps. It really is that simple as well.

The only reason Switch owners shouldn’t buy this game is if they’ve already played all of it to death. Anyone who skipped over Mario Kart 8‘s DLC will still find plenty that’s new here and the same goes for those who’ve spent the best part of three years aching for a proper Battle Mode.

Mario Kart 8 Deluxe is the same brilliant game as it is ever was, now with an added sprinkle of genius. Job done.

Loads of courses and characters

New Battle Mode does the job