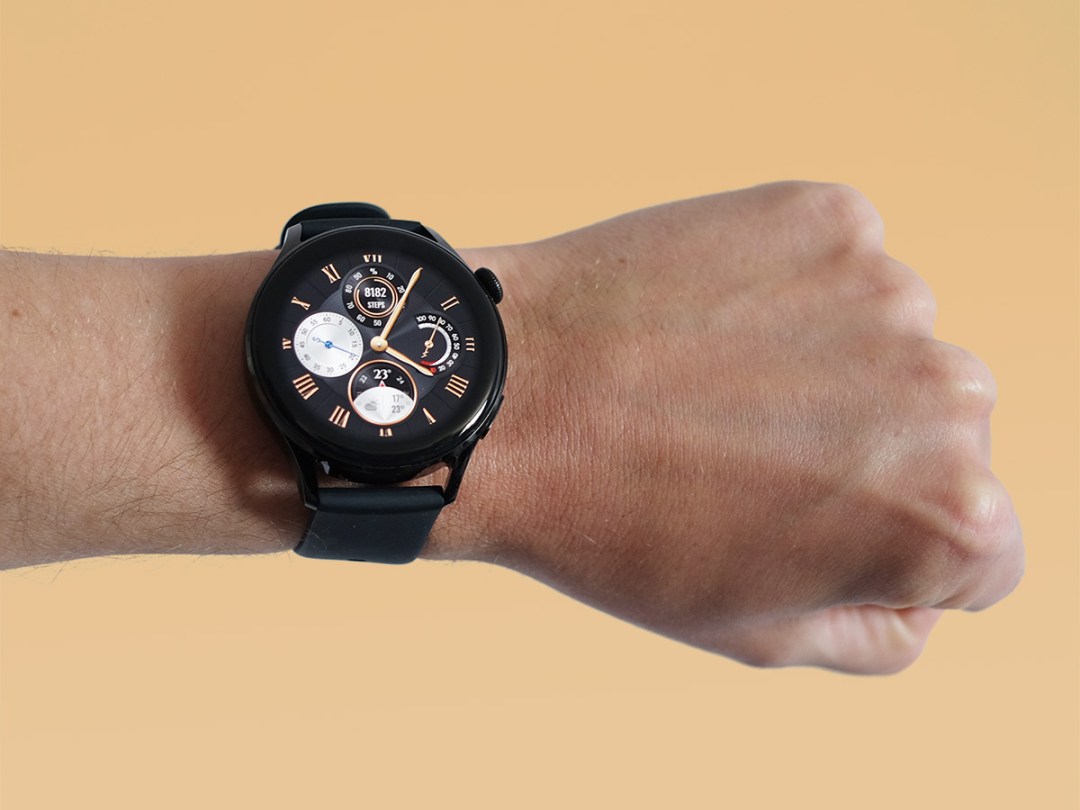 Huawei has made gadgets you wear on your wrist for years. But the Huawei Watch 3 is the first, since 2017, we can really call a smartwatch. Although there’s limited third-party app support, you can now make phone calls with it. Hurrah!

Take a Huawei Watch 2, crash it into an Apple Watch at 88 miles per hour and you’d get something like the Huawei Watch 3. That or a couple of broken watches.

These smart additions might take a hit to the battery life and playing the waiting game to see if Huawei’s HarmonyOS watch platform is really worth investing is another consideration. But for a first crack at this tricky old smartwatch game, the Huawei Watch 3 is something of a success.

The Huawei Watch 3 has a great party trick too. It’s a smartwatch with two very distinct personalities. With a few screen swipes you can turn it into a less smart fitness watch that lasts two weeks off a charge.

Price: Is it good value?

Huawei hasn’t pulled its classic trick of making its gadgets a lot cheaper than the competition here. The Huawei Watch 3 costs £349, just £30 less than the Apple Watch Series 6, £20 less than the Samsung Galaxy Watch 3.

Those watches are part of fairly mature, long-established platforms. The Huawei Watch 3 uses a new wearable and phone platform called HarmonyOS, which hasn’t even reached adolescence yet.

Of course, our job is to tell you where to spend your cash, not to pat giant companies on the back for doing a decent job in a scary new area.

The Huawei Watch 3 doesn’t have stacks of apps available to download just yet, and that’s where something like the Apple Watch has the advantage.

However, the quality of the Huawei Watch 3 hardware does fit the bill. Its top is glossy curved glass, holding a screen with slimmer borders than some. The sides are tough 316L stainless steel and the back is ceramic. To get close to this kind of construction from Apple you need to pay £649. Ouch.

Huawei isn’t diddling us, not at all, but you gotta have faith to buy a Huawei Watch 3 at this early stage.

Let’s get our heads around what is actually different in the Watch 3. Previous wearables in this series like the Huawei Watch GT 2 and Watch GT2e could seem like smartwatches if you squinted a bit. But they weren’t really smartwatches in the strictest sense.

The Huawei Watch 3 is. You can download extra apps from Huawei AppGallery, right there on the watch. There’s a version with an eSIM, and electronic SIM card, that can make calls from the wrist. There’s even a teeny-tiny keyboard that lets you type in search terms on the screen. It’s no fun, but you can do it. You can talk to Huawei’s Celia assistant, as you would with Siri or Google Assistant.

You pay for this, of course. It’s why the Huawei Watch 3 is a stack more expensive than the Watch GT 2. And it means the battery lasts two days rather than two weeks. Huawei says it can last for three days, but we saw just two days of use without even making the thing use its GPS to track a run.

Apparently longevity drops to 1.5 days if you use an iPhone. Ouch.

Other nice bits you get with the HarmonyOS smartwatch system include smooth and slick transitions relayed at a much higher refresh rate than Huawei’s older watches, and an app screen that looks like it has been lifted straight from an Apple Watch. Someone call the police.

It’s more fun to use than a WearOS watch, and for a first stab at a smartwatch interface, it’s pretty bloody good. We like its use of a rotating crown controller too. It lets you scroll down menus and zoom in and out of the app page without touching the screen.

There are some other parts you’re not going to like, mind. Two of the most useful apps available in AppGallery right now are Fitify and Home Workout by Leap Fitness. These offer step-by-step guided workouts, when paired with the matching app on your phone.

However, we had to get the versions available on Huawei AppGallery on our phone, not Google Play, to get them to work. Most of us use Google Play, not AppGallery. Look up “Huawei US ban” if you want to understand the recent histroy between Google and Huawei.

There are a few teething problems too. The Huawei Watch 3 kept on asking if we wanted to start a workout when we were 10 minutes into a tracked run. And Huawei’s Celia assistant is about as intelligent as a carrier bag full of greek yoghurt. Ask “what is the time” and it’ll tell you it doesn’t understand. The list of things she does understand is pretty short, even if some of the entries are useful.

You can set alarms, ask for the weather or to start a tracked run, if your spare energy reserves don’t stretch to a press of the crown and a tap on the touchscreen. You can’t seem to reply to messages on the watch yet either, although this is probably going to be added in the future. The issue is the Huawei Watch 3 parts we like most are the bits already in place in watches like the Huawei Watch Fit and Watch GT 2.

It boils down to this: it’s a great exercise tracker. The Watch 3’s screen is vibrant and ramps up its brightness when you go outdoors automatically. We tested its heart rate sensor against a chest strap and it did pretty well, only struggling slightly at lower bpms — and even this issue seemed to vary between workouts, suggesting Huawei can improve results with a fiddle about with the algorithm.

For the first few days its resting heart rate results were too high as well, but these seems to have mostly settled down. The Huawei Watch 3 can measure your blood oxygen saturation through the day and, new for this watch, log your skin temperature 24/7. And while the Huawei Watch 3’s 2-day battery life is starting to grate, particularly as charging speed isn’t all that fast, 50 minutes of GPS tracking takes 11% off the battery level. Not too bad.

A lot of the time we’re tempted to turn on the Watch 3’s Ultra-long Battery Life mode. This turns it into something much closer to a Watch GT 2. Screen animations looks a bit less smooth, you lose the chance to call on Celia to ask about the weather and the app screen Huawei nicked from Apple disappears completely. But you can still track exercise properly, complete with GPS mapping, it still measures you blood oxygen, heart rate and skin temperature through the day.

The battery also lasts up to two week rather than 2-3 days in Ultra-long Battery Life, restoring the element we’ve always loved most about Huawei’s wearables. It’s tempting use this low maintenance mode and let HarmonyOS and its app ecosystem brew for a little longer. But then you end up wondering why you bought a Huawei Watch 3 in the first place, when Huawei makes bands that do the same stuff for around £100.

As early adopter tech goes, the Huawei Watch 3 is a bit of a star. But there’s still some of that early adopter vibe here, perhaps too much for many.

The other watches you might buy at around this price are the Apple Watch Series 6 and Samsung Galaxy Watch 3. Both have been about a while longer than this one, and both have a key feature the Huawei Watch 3 lacks, an electrocardiogram sensor (ECG).

This looks at your heart rhythm to check for issues. If you’ve read any “My Apple Watch saved my life” stories, they are likely down to the ECG sensor.

They also have better music support. The Apple Watch can now download playlists from Spotify, if you’re not into Apple Music. Samsung’s Galaxy Watch is also compatible with Spotify. Huawei wants us to sign up for its own new music streaming service instead, which is limited.

You can’t sync your own tracks to the watch either, which you can do with some of Huawei’s cheaper watches. Some of this may be down to the Huawei Watch 3’s newcomer status, but the company seems to be pushing us towards a more ‘walled garden’ approach than ever. And to be honest it’s not one we are sure we want to be stuck in.

So how about Huawei’s cheaper watches? The Huawei Watch Fit and Watch GT 2 get you features similar to what the Watch 3 offers in its battery saver mode. You get full fitness tracking and, with some models, pretty decent on-watch workouts. Their displays are fantastic given some cost 70% less.

You miss out on downloadable apps, the Huawei Celia Assistant and the opportunity to charge your watch ever five minutes. But at this relatively early stage of HarmonyOS’s development as a wearable platform, one of Huawei’s simpler watches may be a better fit for some of you.

The Huawei Watch 3 is the most dynamic wearable Huawei has made in ages. And given it runs totally new HarmonyOS software it works surprisingly well, and comes across a legit rival to the Apple Watch and Samsung Galaxy Watch 3.

However, at this stage it’s not the one we’d pick. It pushes you too hard towards services most of us don’t want to use, like Huawei’s music streaming service and Huawei AppGallery, although there is a growing userbase there. The smart stuff you can do here doesn’t justify the drop from Huawei’s normal 14-day battery life to just two days.

Fitness tracking is great, a match for Huawei’s best for the basics, and that’s all enhanced by a couple of third-party workout apps you can download.

Lovely build, brilliant for fitness, but still some way to go in terms of software