Android fans would love to tell you how long they’ve been waiting for an official Google smartwatch – but there’s a gap on their wrist where a wearable should be. The iPhone crowd are now on their eighth-gen Apple Watch, after all. Expectations are therefore sky high that the Pixel Watch will give it a run for its money. No pressure, then.

With an unashamedly premium design, and fitness tracking help from newly-acquired FitBit, things are off to a great start. Undercutting Apple isn’t going to hurt, either. But Google’s debut effort is missing a few features we’ve come to expect from top-tier smartwatches, and there’s a one-size-fits-all approach that won’t necessarily fit all.

Is there enough here to satisfy the Pixel faithful?

Arriving in a single size, and with no Pro, Ultra or SE variants to confuse things, the Pixel Watch is a petite 41mm. That’s the same as the smallest Apple Watch, only with a circular screen instead of a rectangular one. It looks pretty small on our wrist – but not laughably so, and is pretty sophisticated even with a basic black silicone strap.

It’s almost entirely face from the front, with domed glass that perches neatly on top of the stainless steel body. For sheer style, we reckon it’s on par with the Apple Watch and Samsung’s latest Galaxy Watch models.

The whole thing is 5ATM water resistant, and Gorilla Glass 5 should shrug off light scrapes and scratches, but it won’t survive the same punishment as the sapphire glass found on other premium smartwatches. The domed shape might make it a challenge to fit a screen protector, too.

The watch body looks especially subtle in matte black, with champagne gold and polished silver being a little more eye-catching. The only flourish is the digital crown at the side, with a shortcut button sat stealthily above it. Pressing the latter can be tricky, given it’s built into the lower half of the watch body.

Google has come up with a slick mechanism for swapping straps, which is similar to a DSLR lens. You press a button to release the lock, then slide the strap anticlockwise to remove it, then do the same in reverse to clip in a replacement. It does mean you’re stuck with Google’s official bands and straps at launch, and they’re mighty pricey, but there is at least an extensive range to choose from including fabric, metal, Milanese loops and leather.

At 1.2in, the circular screen isn’t especially big, and the bezel that surrounds it is disappointingly chunky – but you’d be hard-pressed to notice. The WearOS interface takes full advantage of the perfect blacks delivered by the AMOLED panel, so the two blend seamlessly together. The curved glass has something of a slimming effect, too.

The 450×450 resolution is pin-sharp at arms’ length, and it helps that Google hasn’t tried to squeeze too much info onto every watch face and menu. Everything is easy to read at a glance, with great viewing angles and a UI that doesn’t bombard you with colours.

An impressive peak 1000 nits brightness and fast-reacting ambient light sensor means you’re never left squinting at the screen, even in bright sunlight. The watch wakes quickly as you raise your wrist, and is smart enough not to turn on while you’re just walking around.

As much as we like the always-on display option, which sticks a stripped back version of your current watch face onscreen even when you’re not paying it any attention, it has a big impact on battery life – something the Pixel Watch doesn’t exactly have to spare. It’s disabled by default, and we reckon it’s best left that way unless you don’t mind more regular recharging.

Google reckons you’ll get 24 hours of use from the Pixel Watch, which should put it ahead of the latest Apple Watch. We found that estimate to be way too generous, at least with the always-on display enabled – a battery saver warning would flash long before bedtime, after starting the day with a full charge, going for a 30 minute run and getting a reasonable amount of notifications.

We saw the battery percentage dip by around 7% an hour simply sitting at a desk, which translates to about 14 hours without turning on the battery saver mode. That’s a long way off what we saw from the latest crop of Samsung Galaxy watches.

Let the screen sleep while you’re not using the watch and things improve. Even with an exercise session it’ll last all day and make it through the night without needing to recharge – but it’ll be down to the wire, and you’ll want to top up before leaving the house the next morning.

Had Google gone for a bigger watch, it would have had more room inside for a bigger battery. We’re betting the second-gen model will come in multiple size options for those who demand more staying power.

The magnetic charging puck takes 30 minutes to get the battery back to half capacity, and closer to 80 minutes for a full recharge. That’s pretty standard for most smartwatches.

Interface: back to basics

WearOS, Google’s home-grown smartwatch software, isn’t exactly new. Samsung, Fossil and others have been using it for a while, but this is the first time Google itself has had final say in terms of looks and features. The Pixel Watch gets version 3.5, with the same fonts, icons and colour schemes you’ll find on Google’s Pixel phones. All the watch faces have similarly minimal designs, but are easy to customise with multiple complications.

The UI is a breeze to get around, with swipes up and down to reveal new notifications and the quick settings menu, and left/right swipes scrolling between any installed ’tiles’. Think weather, your current step count, music playback controls and upcoming calendar appointments. You can also twist the digital crown to scroll through menus, and use the shortcut button to see your most recently used watch apps.

It’s loaded to the nines with Google apps, as you’d expect. There’s turn-by-turn navigation from Google Maps, contactless payments via Google Wallet, smart home control through Google Home and voice commands with Google Assistant. The Play Store is on hand too, for adding third-party favourites like Spotify. 32GB of on-board memory means plenty of space for downloads, and for storing music for offline playback.

The tiny screen can make tapping out replies to notifications on your wrist a bit of a faff, but it beats having to pick from a list of canned messages. There’s a last-gen Exynos CPU running things behind the scenes, but everything feels responsive enough, with apps loading quickly and no signs of stutter while scrolling through menus.

It’s comfortably the best wearable UI Google has made yet, and as easy to use as an Apple Watch – although the iPhone maker wins on future support, with Google only committing to three years of guaranteed software updates.

The Pixel Watch doesn’t go mad on different disciplines (it’ll record 40 specific sports, but who’s counting) – instead it’s more concerned about general health and wellbeing, with FitBit’s Active Zone minutes sitting front-and-centre. Data gets synced to the FitBit app, which is extensive without being overwhelming, and Watch owners get six months’ free access to the premium subscription tier.

Fair play to Google for calling in the experts, rather than slogging on with its own Google Fit software: FitBit is far more detailed, with food and water intake, mindfulness reminders and exercise readiness tracking as well as the basics like step count and calories burned. It also brings some of the best heart rate and sleep tracking outside of high-end multisport watches, with 24/7 per-second monitoring. An ECG function is present and correct, too – something only found in high-end wearables.

The main thing missing right now is blood oxygen saturation, although the hardware’s there to support it once Google’s ready with a software update. There’s also no temperature sensor, like you’ll find in the latest Samsung and Apple watches, but we’ve yet to see a compelling use for the info one can gather so doesn’t feel like a dealbreaker.

Step count, heart rate monitoring and GPS route tracking all performed admirably during our testing, coping well with a mixed running route that included a fair bit of tree cover. Results were consistent and on par with the Samsung and Apple devices we had access to during testing, so amateur athletes don’t need to feel they’re missing out by not going for a Garmin.

Walking, running, cycling, swimming and outdoor sport are all detected automatically, but the only way to enable GPS tracking is by manually recording an activity.

With its standout styling and easy-to-use interface, the Pixel Watch is a pleasure to strap on your wrist. The software is slick and FitBit health tracking is comprehensive without alienating the fitness-phobic – but Google hasn’t entirely knocked it out of the part on its first attempt.

Battery life isn’t all that impressive, the screen bezels are the wrong kind of thicc, and the lack of a larger model is going to limit its appeal. There’s no ignoring that this is a high-end watch, too: £339 might be a fair bit less than Apple charges for one of its Watches, but the Samsung Galaxy Watch 5 is kinder to your wallet while also lasting longer away from the mains.

If you’re swayed by the looks, though, it’s not hard to overlook those limitations.

A stunning looking smartwatch with stellar fitness tracking, albeit one with a few flaws. The Pixel Watch is a confident first start for Google’s wearable effort, but falls short of more established rivals

Minimal styling stands out from other smartwatches

WearOS is user-friendly and shows promise

Only one size, which can look small on many wrists

A refreshed watch with brand new features and shape-shifting arms 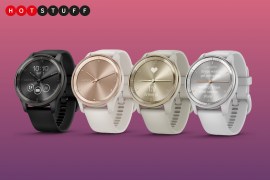