Nikon’s best known for making premium DSLRs. It also does binoculars and rifle scopes (true story), but has rarely put its name to dedicated video kit. Until it unveiled the KeyMission 360 at CES today.

Rather than being a tentative step into the world of GoPro and Garmin, the 4K KeyMission 360 enters the action cam fray with both barrels blazing. It’s a wearable camera that can capture 360° video in ultra high definition.

How? By featuring an image sensor and lens on the device’s two opposite sides. Images captured are then combined to create 360° footage.

Naturally, the KeyMission 360 is the first entry in an entirely new product line for Nikon – one that’s intended to capitalise on the camera maker’s impressive imaging heritage, and get ahead of the oncoming trend for VR-friendly video.

The first set of revealed footage is suitably adventurous, with mountain biking and rock climbing in the desert, and kayaking down waterfalls in the jungle. Drag the clip around with your mouse to get a full 360° view. Everything’s in glorious 4K, too, if you’ve got a screen with a high enough resolution.

Aside from claiming to capture great, visceral footage, the camera is waterproof to depths of 30 metres and has been built to withstand shocks, dust and low temperatures. It also features electronic vibration reduction tech to help compensate for the inevitable effects of camera shake.

At present, pricing, availibitity and several other major specs for the KeyMission 360 are unconfirmed. We’ll let you know more details about the action cam as soon as we have them.

CES 2016 › Read all the latest headlines

The sheer number of ways the Insta360 One R can film you failing to navigate a drag lift at Bracknell dry ski slope is mind-boggling. Choose from 5.7k 360° video, 4K wide-angle footage, timelapse, slow-mo, bullet-time shots or 19MB stills, all with exceptional image stabilisation and impressive AI trickery to capture your spectacular collapse. There’s […] 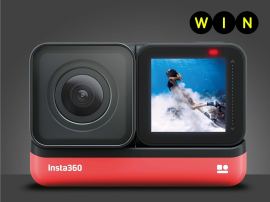