Navigating Black Friday discounts is trickier than avoiding red shells around Rainbow Road. Telling the real deals from the marketing smarts can feel like taking a chance on an Item Box. But if you’re shopping for a Switch, Nintendo’s best Black Friday bundle is a pick-up worth pursuing. There’s also money to be saved on games such as The Legend of Zelda: Skyward of Zelda and Metroid Dread.

Ninty’s Black Friday bundle deal pairs the standard Switch with a digital download of Mario Kart 8 Deluxe. You also get three months of Nintendo Switch Online thrown in, plus free express delivery from the Nintendo online store – so you could be playing before it’s even Black Friday.

This Nintendo Switch bundle costs £260 – which is the normal price of a standalone Nintendo Switch console without any extras. Bought separately, the items included in Nintendo’s Black Friday package would set you back £317. That means you’re saving the best part of £56, which you can use to bag some discounted games and accessories from elsewhere in Nintendo’s Black Friday sale.

Put another way, you’re paying the usual price for a standard Nintendo Switch console, but getting one of the best arcade racing games thrown in for free, as well as 90 days of complimentary online play. And it’ll all turn up at your door just a day or two after you order. Not bad at all, Ninty.

If a Switch is top of your wish list, Black Friday could definitely be the best time to buy one. In addition to the Mario Kart deal, Nintendo’s offering bundle discounts on packages including Mario Party Superstars and Super Mario 3D World. You can also bag discounts on other top-tier Nintendo titles and a range of headphones, console cases, and wired and wireless controllers. There’s 33% off the likes of Monster Hunter Rise, DARK SOULS Remastered, Astral Chain and the fantastic Xenoblade Chronicles Definitive Edition. There’s also 35% off themed controllers and Pokémon merch is half-price, including this frankly adorable Pikachu mug. 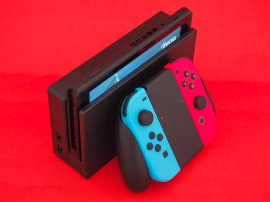