As portable devices become more sophisticated, we’re starting to play hardcore games like GTA III on our mobiles and tablets alongside the casual fun of flinging irate avians at primary-coloured pigs.

And let’s be brutally honest, the touchscreen doesn’t cut it as a gaming input device – so gaming peripheral manufacturer Steelseries is throwing its hat into the ring with the Ion Mobile Controller, a mini gamepad that has all the buttons and joysticks you’d expect from a full-size controller. That means you get a pair of thumbsticks, a D-pad, four face buttons, and two shoulder buttons.

The Ion Mobile Controller connects to your Android mobile or tablet (or PC) over Bluetooth and can be customised using a free app. Battery life is advertised as 20 hours.

Yes, hooking up Bluetooth controllers to your Android phone is nothing new – but the Ion Mobile Controller’s small size (108 x 55 x 18mm) should make it a lot more useful for gaming on the move. 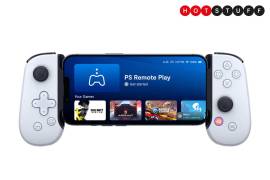 GameSir’s X3 mobile controller cools your phone while you game

Update: After crowdfunding success, the ice-cool controller is on general sale