The Pixel 6 and 6 Pro have been long rumoured – so much so that Google decided to reveal loads of details about it in the Summer, in addition to talking about the Pixel 5a.

However, there will be an event to formally launch the phones. Google says: “On October 19, we’re officially introducing you to Pixel 6 and Pixel 6 Pro—the completely reimagined Google phones. Powered by Tensor, Google’s first custom mobile chip, they’re fast, smart and secure. And they adapt to you.”

We know the new Pixels will run Android 12 and have a really good-looking new design with a bar across the back to house the new camera setup. The Pro handsets will be in grey, gold and silver, but there are colourful options with the Pixel 6. Crucially though, the new Pixels will use a custom Google chip, which Google is calling Tensor. Essentially, it’s following the Apple route of designing its own silicon to power its own devices.

Continuing rumours also suggest a folding Pixel, too, and while it’s probably too early for that, we’re hoping there may be a sneak preview of a 2022 device…

More images claim to show next Google flagship in the wild 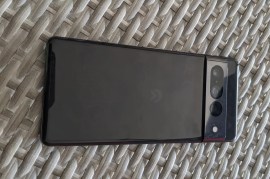