We all went to school with somebody who’d make outlandish claims: their dad could run faster than a greyhound, they met Captain Planet on the wave machine at Butlin’s, or their bones were harder than titanium. Obviously it was all nonsense, but in the case of Casio’s latest G-Shock that last one is actually true. The solar-powered GMW-B5000TR (£1480) is made of an ion-plated titanium alloy created by Nippon Steel, which Casio reckons is roughly twice as hard as pure titanium but still lightweight, anticorrosive and hypoallergenic. That toughness also means both the gold case and the multicoloured band can be given a shiny mirror finish. With five daily alarms and world times, a stopwatch and a countdown timer, you couldn’t call the GMW-B5000TR a smartwatch, but it does have Casio’s Smartphone Link tech onboard, so it’ll sync with the time on your phone and you can use it to trigger an SOS from your mobile if it goes AWOL. It’s also waterproof down to 200m, which is more than enough to survive a dip in the Butlin’s wave machine, whether Captain Planet’s there or not. 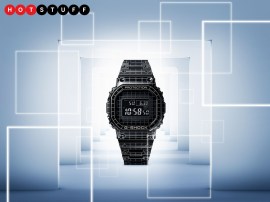