It might have experimented with a few ‘flagship killer’ phones recently, but Poco is best known as an affordability champ – and the X range has always found the sweet spot between specs and spend. Now the firm is back at it with the Poco X4 GT, which enlists MediaTek’s help on the hardware front and gets a triple-lens camera setup.

The eight-core Dimensity 8100 CPU is meant to trade blows with Qualcomm’s top-tier Snapdragon processors, which is something you’d usually have to pay big bucks for. It impressed us inside the Realme GT Neo 3 recently, which bodes well for the X4 GT’s performance potential. The chip is paired with 8GB of RAM and either 128 or 256GB of storage.

There’s a sizeable 5080mAh battery that should comfortably last an entire day of heavy use and still have something in reserve. Poco is also bringing 67W wired charging along too, which should manage a complete top-up in about 45 minutes.

An in-display fingerprint sensor doesn’t make the cut: instead the power button doubles as a digit-scanner for increased security.

You know we’re talking entry-level territory when the display gets LCD tech instead of AMOLED, although Poco reckons it’s still ‘best-in-class’ on account of the 144Hz refresh rate. There are seven stages of dynamic adjustment to save on battery power, and 270Hz touch sampling for near-instant response when gaming. The 6.6in, 20.5:9 aspect ratio panel has a 2460×1080 resolution and supports Dolby Vision HDR video – although with a typical 500nits brightness we’re betting it won’t be top of the wish list for mobile movie buffs.

Around back, there’s a 64MP main camera, plus an 8MP ultrawide and 2MP macro (because phone companies think more is always better). You don’t get luxuries like optical image stabilisation, but it’ll record 4K video, and the high pixel count should help pack in the detail in good lighting conditions. There’s also a 16MP hole punch selfie cam up front.

Poco has a habit of rebranding China-only Redmi handsets for the international market, and the X4 GT is no different. It’s effectively a Redmi Note 11T Pro in a different outfit, tweaked for the UK with a different Android skin and a more appealing price. We’ve also only recently seen the Poco X4 Pro 5G, which sits above it in the line-up.

Still, given this is the spiritual successor to the X3 NFC, a ridiculously good value handset, we’re hoping Poco can repeat the formula. The X4 GT will be going on sale over the next few weeks in black, blue and silver colour options. Prices start from €379 in Europe, with official UK amounts yet to be revealed. 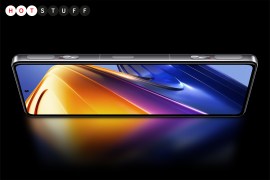