Nanoleaf’s Aurora light panels provide a dazzling show wherever you mount them, but the company isn’t done thinking up inventive new ways to jazz up your smart home. Here’s another: the Nanoleaf Remote. It looks like an enormous 12-sided die, but this one’s not meant to be rolled. Instead, you’ll create smart home scenes in Nanoleaf’s app – using Aurora lights, but also Apple HomeKit-compatible things like blinds, thermostats, and speakers – and then choose between them by laying a certain side of the Remote pointed up. You can even rotate it to adjust a light’s brightness, for example. The Nanoleaf Remote looks as clever as it does cool, and it’ll be out this spring at £50.

“Alexa, give me sunlight” 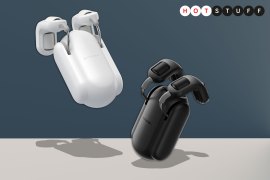