Virtual synths are all well and good, but nothing gives you that feeling of being in the moment as physical hardware as you twiddle knobs, tap buttons, and bathe in the glow of LEDs and flashing lights, considering yourself an electro god. IK Multimedia’s UNO Synth (£210) gives you such power, and packs a full mono analogue experience into a footprint little bigger than an iPad’s. Despite its tiny form factor, UNO kicks out some big sounds. From its two VCOs, noise generator, multimode filter, on-board effects, arp and sequencer, you can coax all manner of ear-smashing noise, from stomach-churning bass to soaring sweeps. And if that all sounds like too much effort, kick off with a preset, hold down some keys, twiddle some knobs, wear a massive fake moustache, and try to convince friends you’re Giorgio Moroder.

You used to need real instruments and a studio to turn your musical ideas into actual tunes; today, you only need a phone, some apps and – optionally – talent 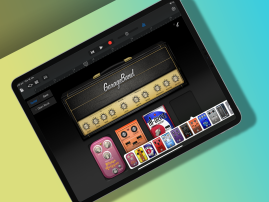