Q Acoustics has launched its first active loudspeakers in the form of the Q Active 200 (£1,499) and Q Active 400 (£2,299), and both will apparently combine “dynamic widescreen sound” with an ungodly amount of versatility. The Active 200 features two 2.25in BMR drive units, a rear-firing 4.5in long throw subwoofer, and six discrete amplifiers resulting in a total power output of 280W. The Active 400, meanwhile, packs the same BMR drive unit arrangement as the Active 200 but adds two more discrete amplifiers for 440W of power alongside an extra 4.5in subwoofer to help tighten up that bass. Both the Active 200 and 400 come bundled with a Control Hub that faciliates a huge range of inputs including HDMI, optical digital, Spotify Connect, Apple AirPlay 2 and Bluetooth, and even brings voice control into the mix with support for Google Assistant, Siri, and Amazon Alexa. The Q Active 200 will arrive in November this year, with the Active 400 launching a few months later in January 2021.

These five-star speakers are a force to be reckoned with 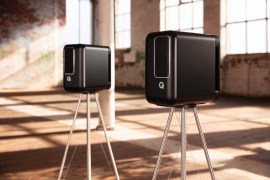