Polka-Dot Man. King Shark. Powerfin. One of those doesn’t appear in The Suicide Squad. And it’s probably not the one you think. While you will see spots and sharks in James Gunn’s DC misfits remake, Powerfin serves a more mundane purpose: keeping JBL’s latest true-wireless ‘buds locked firmly in your ears. A real everyday hero, the Powerfin helps to hook the Reflect Flow Pro ‘phones (£170) into your hearing holes – which is exactly where you’ll want them. Adaptive noise-cancelling keeps the enemy (background noise) at bay, while Smart Ambient can allow sounds in if you need to listen out for baddies. Six microphones ensure clarity when you call your fellow crime-fighters, while IP68 protection means they’re all good against the scourges of dust, sweat and rain. Need backup? Talk directly to Google Assistant or Alexa. You’ll get up to 10 hours of battery life from the in-ears, with a further 20 served up by the Qi-compatible charging case. Which should be more than enough to see off the villainous Lugbuster. 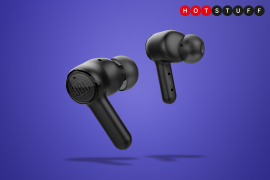