Home / Features / The road to cell: next-gen electric cars worth your time and money

In partnership with MPB.

Once a fringe buy for early adopters and Elon Musk fanboys, EVs are rapidly becoming a sales success for many of the big car makers.

Altough the electric 5 is just a concept for now, Renault CEO Luca de Meo claims this delectable throwback will go into production, possibly to replace the ageing Zoe. Well, what better way to wave farewell to one of the most successful EVs so far than with a car that pinches all the brilliant bits of one of the most popular hatchbacks of the 1970s? Fiat, Mini, Honda and even Hyundai (see p53) are all playing with nostalgia when it comes to electrifying their ranges, and they don’t get much more bedroom-wall-poster than the original Renault 5 Turbo – a car from which this electric concept draws heavily with its boxy wheel arches, low ride height and aggressive headlights.

Swing around the rear and you’ll find a glorious slab-sided hatch boot with an eye-catching full-width light bar and integrated ‘5′ logo. The front foglamps are also brilliantly retro, although they do feature a floating light treatment that sits either side of a massive illuminated Renault badge for an added Tron touch.

There hasn’t been any word on the electric powertrain that will underpin the revitalised Renault 5, but the squat stance (particularly at the rear) and cheeky red stripe hint at the livery found on old Renault 5 Turbos, meaning we could be treated to a high-performance variant when this electric model goes on sale in 2023.

First unveiled at the 2019 Geneva Motor Show, the car then badged as the Seat el-Born Concept hinted at what an all-electric sporty hatchback from the Spanish brand might look like. But unlike so many concepts made real, the finished product remains largely unchanged, packing the same sharp creases and pumped-up dimensions as its prototype.

Based on the same underpinning as the Volkswagen ID.3, it majors on interior space – but the Cupra badge signifies spicier performance compared to its Germanic sibling. Scour the marketing bumph and you’ll see it can accelerate to 31mph in 2.9 seconds.

That’s pretty quick, but then most electric vehicles do feel brisk from a standstill. Perhaps more importantly, a 77kWh battery drives those massive 20in rear wheels for up to 310 miles on a single charge. Fast-charging capabilities also mean it can take on an additional 160 miles of range in under half an hour with the correct outlet. Although the rest of the official stats are under wraps for now, it’s essentially a sportier ID.3 with some slick exterior styling and unique interior design touches, all geared towards a more youthful market. Given we’re not expecting to see an ID.3 with sportier styling for a while yet, the Born may have a handy niche to itself when it arrives later this year.

The latest C4 has opted for a bold new style. Gone are the cute curvy lines and protective air bumps (remember the old C4 Cactus?) as we welcome in a razor-sharp front end and a hybrid silhouette that sits somewhere between an SUV and a hatchback. The electric versions feature a 50kWh lithium-ion battery pack and 100kW motor.

Hot off the success of Vauxhall’s electric Corsa comes the larger, slightly more family-friendly Mokka-E. Just over 200 miles of range comes courtesy of a 50kWh battery pack, which can be charged up to 80% in half an hour from a 100kW outlet. An affordable EV for average Joes.

Among the array of EVs hitting Britain’s roads this summer is Skoda’s midsize SUV. The Czech marque is rapidly becoming one of the most stylish brands in the VW Group, and the Enyaq IV – smart, sturdy and boasting the latest infotainment tech – offers around 260 miles of fully emissions-free range.

The cutest car of all time gets its electric makeover, alongside some futuristic design touches that make it look as though it’s taken fashion tips from a Transformer. The base price feels steep for a 500, but owners get flashy tech such as one-button door opening and strafing LED indicators. The range is also a mightily impressive 194 miles.

Mazda’s first all-electric vehicle plays it safe with a generic SUV shape, but dig a little and there’s more to discover. Some of the interior, for example, is finished in a sustainable cork material and the rear doors open backwards for easier entry. A range of around 124 miles falls a little short of its rivals, though, and the speed stats are unthrilling.

to many, Hyundai is a marque that has only been on the European scene for a few years, but its history in cars goes way back. The Pony, for example, was South Korea’s first mass-produced and exported car of the mid-’70s, and Hyundai celebrated this in 2019 with its 45 concept – a rather dashing retro-inspired EV.

Thankfully, the head honchos saw fit to put this concept into production… and it remains largely unchanged in the soon-to-be-available Ioniq 5. Retro-tastic exterior styling meets cutting-edge tech in the form of 800-volt charging, allowing drivers to add 62 miles of range in just five minutes via Ionity’s network of 350kW fast chargers.

The interior’s smart too, with the ‘lounge’ feel that so many EV makers are gunning.

With enough room inside for a large family, the follow-up to VW’s ID.3 sets out to blur the line between a conventional jacked-up SUV and a sleek saloon, and represents an understated alternative to Tesla’s Model Y. The top-spec models pack a range of 310 miles and a 10in touchscreen with fully digital instrumentation.

Merc is busy expanding its EQ range… and following on from the EQC comes the smaller but equally handsome EQA, a more ‘entry level’ SUV with a range of 263 miles. It can be specced with a rose gold interior to go with your phone case and chocolate diamond earring.

Tesla’s sales success during a pandemic has been miraculous… and keen to continue its hot streak, the tech giant will launch a seven-seat version of the Model 3 in 2022. The Y will come in either Performance or Long Range AWD guise, where 314 miles on a charge is possible.

It’s a Mustang, but not as we know it. Meet the newest pony in the Ford stable: a pseudo muscle car with a hi-tech interior including huge portrait- orientated tablet and secondary widescreen. It has an electric range of 379 miles and a 0-62mph time of just 3.7 seconds.

Consider the upcoming Ariya the new face of Nissan: gone are fussy metallic grilles in favour of a single hi-tech slab that packs more lights than a Christmas tree. LED lamps majestically disappear when the sun shines, while a light-up Nissan badge takes pride of place when it sets. Range is up to 310 miles.

Audi has already fulfilled its ‘big electric SUV’ brief in the almighty E-Tron, and now it feels the time is right to spice things up a little with the launch of its RS E-Tron GT – a performance saloon that packs a staggering 646hp, allowing it to rocket from 0-62mph in just 3.3 seconds.

Keen followers of the automotive news feed will already know that this vehicle shares a bunch of its parts with Porsche, and specifically the Taycan, but don’t think they’ve merely re-badged it (you fool). The RS E-Tron GT will be built alongside the R8 but actually boasts a lower centre of gravity than its supercar sibling, and is the most powerful RS model to date.

An impressive range of 283 miles is also offered, as well as the ability to charge from flat to around 80 % capacity in 23 minutes, so long as you have access to one of the rocking-horse-poop 270kW chargers.

Inside, a new 10.1in central touchscreen sits alongside the existing 12.3in Virtual Cockpit cluster, meaning owners won’t be wanting for displays. On top of this, there’s a ‘signature sound’, designed to bring the electric motors to life with some aural presence.

Some have bemoaned the styling but we think it looks phenomenal, neatly blending the aggressive haunches of the R8 with the more practical body style of an A6 or A7 – all wrapped up in enough futuristic touches to have passers-by gawping when it arrives in May.

Deliveries of Rivian’s awesome electric pickup are due to start in the USA later this year, with rumours suggesting it might come to the UK by 2022 – but that’s just an estimate. What makes this truck special? Well, it’s tipped to boast Land Rover-esque off-road prowess and over 300 miles of useable range.

Despite sister company Polestar making waves in the EV game with its luscious ‘2′ fastback, the job of electrifying SUVs has been left to Volvo itself. Its range-topping XC40 Recharge P8 is packed with class-leading tech, while 150kW fast- charge capabilities mean an 80 % slurp-up takes just 40 minutes.

It’s not likely to arrive until next year, but that hasn’t stopped the Musk hype machine being cranked up over Tesla’s new Roadster. Designed to fill a sportscar hole that the original Lotus-based Roadster left, the latest two-seater is said to have a 250mph+ top speed, a 0-60mph time of 1.9 seconds and a range of 620 miles.

Like many of the premium brands, BMW is on a mission to electrify its range, with a plug-in hybrid variant already on offer pretty much across the board. But the iX is set to become the brand’s ‘technological flagship’, offering not only ace stats (like 373-mile range) but a new interior complete with a curved digital display.

After its unveiling at last year’s CES, we finally got an update on Sony’s surprising concept car at this year’s virtual show… to confirm they’re actually testing the thing for real. Oooh! Originally designed to showcase the brand’s future in-car infotainment and autonomous driving kit, it’s now been seen on public roads in Austria.

Fuell’s electric bike will help you go with the Fllow

If only it came with its own dictionary 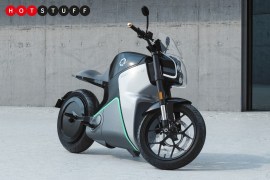 And it comes with space to stow your shopping 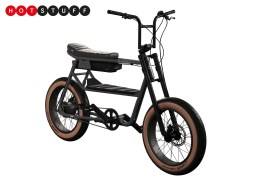