The OnePlus One launched in June of 2014 into a cacophony of frenzied hype, fuelled by its scarcity (until recently, you needed an invitation to buy a One) and magnificent hardware for the money (a black 64GB, 5.5in OnePlus is now £268 – under half the price of most of its mainstream, SIM-free rivals).

But despite having a rabid fanbase and superb product to sell, the Chinese handset maker has managed to pack a ton of industry politics and wrangling into the 11 months that the One has been on sale.

Most of that wrangling has centered around its fraught relationship with Cyanogenmod, creators of the heavily tweaked version of Android that powered the One handset from the day of its release.

That public spat between OnePlus and Cyanogenmod has now ended in divorce. OnePlus has hired a crack Android team to create its own take on creating its own cut of the OS, and the first beta of their handiwork is now available – OxygenOS.

There is a catch, though: you need to be an experienced Android tinkerer to install Oxygen. If you think that unlocking your bootloader is something you’d do with your car, think twice before delving into Oxygen.

You can download the the new OS free from the OnePlus site, but you then need to manually flash it using TWRP recovery (find full instructions here). OnePlus claims that it’s working on easier ways for users to update their handsets from CM11S; they need to, and in a hurry.

But there is good news if you’re a OnePlus owner who doesn’t want to hack their device (with the accompanying risk that you end up with a £268 brick).

Despite the fall-out between the OnePlus and Cyanogenmod, an over-the-air update for the One is now available that takes it from CM11S (KitKit 4.4) to Cyanogenmod OS 12 (based on Lollipop 5.0.2). Just head to Software Update in Settings, and away you go.

Of course, if you are the type spends your days hot swapping Android ROMs, it now means you have a choice between OxygenOS and the new CM OS 12.

So now that you’re spoilt for choice, which way should you go? We’ve tried both takes on Lollipop on our 64GB Sandstone Black One in recent weeks, and here’s what we think…

OxygenOS and CM12 have split the OnePlus community straight down the middle. But since two approaches to Lollipop are so different, that’s hardly surprising.

OxygenOS is about as close to stock Android Lollipop as you can get. And if you know Lollipop, you know that means the minimum of extraneous features.

It’s a light, clean interface that’s stripped of all but the essentials to get the task at hand done – no fussy icon separators, no complex multiple choice menus, and only the necessary set of colour and tone changes to indicate that something is on or off.

In fact, the Oxygen team has only added a few extra features beyond stock.

You can double tap the One’s screen to wake it, which you cannot do on stock Lollipop. And the Oxygen-powered One supports gestures – you can launch the camera from sleep by drawing a circle on the screen, or activate the flashlight by drawing a V. And in Settings, you can switch between hardware and software buttons (the former buying you more screen real estate).

It’s as though the Oxygen team wanted to distant themselves from the tweak-it-all philosophy of Cyanogenmod, restraining customisations to those most often used by One owners.

CM12, on the other hand, takes these basic tweaks and turns them up to 11, in a way that long-term OnePlus owners will know only too well from CM11S.

For example, a short-tap the hardware Menu button with CM12 activates a dark grey panel with what looks like the standard Lollipop ‘Wallpapers, Widgets, Settings’ options.

But tap the triangle of dots above that trio of options, and a whole new world of tweaks slides into view. You can change everything from icon sizes to screen grid size. You can kill the Google Search bar from every screen, change the sort order for apps and even the scroll effects for the home screen and app drawer.

Then there’s the theming engine. Cyanogenmod has long taken Android’s freedom to tinker very seriously, and the latest Themes app in CM12 takes this to its logical conclusion.

Just about everything in CM12’s interface can be altered, from fonts to wallpapers to icons and sounds, and the Themes Store is beautifully designed and packed full of high quality, ready-built free and paid skins.

And CM12 isn’t just a pretty, endlessly changeable face – Cyanogenmod included some functional treats that are missing from Oxygen. It will handle RAW files, for example, and can shoot 4K and slow-motion video.

So as you will have gathered by now, CM12 is for OCD tweakers and power users, while OxygenOS is for Zen Android purists.

And it’s this difference that has split in the OnePlus community. Those who bought into the One hardware to date are more likely to hack (you could only buy the One with an invite, and the invites were only available from those in the know).

Perhaps the logic with OxygenOS is that now that OnePlus has made the handset available without an invite, it will attract more owners who want to spend more time using than fiddling.

But if Oxygen is OnePlus going for the big crowds, then we’re baffled as to why the company has only released the new OS as a .zip download. And a .zip that’s only of use if you know how to unlock your handset’s bootloader and install TWRP recovery via fastboot. That doesn’t sound like the road to a mass audience to us.

The world’s full of OnePlus owners right now who claim to have experienced monumental differences in OxygenOS and CM12 performance. We’re not among them.

Rather, we’ll lay a bet that 80% of the differences experienced between the two systems are down to the ways in which they’re installed or updated.

For example, our first flash of OxygenOS chewed through chunks of battery life at an alarming lick. We then reinstalled, wiped the cache and then spent 10 mins carefully adjusting the Location settings. Lo and behold, our Oxygen OnePlus delivered all day battery life.

Others have claimed that CM12 is laggy. We’ve installed and reinstalled the update three times on our 64GB OnePlus, and whilst we’ve experienced some graphical glitches (which are small but continue to this very day, by the way), we’ve not experienced any serious lag.

In fact, both Oxygen and CM12S are awesomely snappy on the One.

They’re helped by the fact that the One is damn fast in the first place, thanks to its Snapdragon 801 processor and chunky 3GB of RAM. Yes, the innards have the job of pushing pixels around that 1080×1920, 5.5in display, but the One has more than large enough lungs for the job.

If we have to call it on the basis of speed and fluidity of operation, OxygenOS takes the winner’s podium (although we’ll emphasise that the margin is fine).

Everything in OxygenOS is just a little more fluid than it is in CM12, from tapping open the app drawer to swiping between home screens. This smoothness may be down to the fact that it simply has fewer features than CM12.

We also experienced some rather odd ghost gestures when using CM12 – strange moments when the app drawer screen would flick the opposite direction from the flick of a thumb, or a sudden shift in scrolling speed of the Settings menu.

We’re 100% sure that it’s nothing paranormal, and neither does it detract from the overall experience. But it did leave us with the suspicion that the Cyanogenmod team has fixes to apply in the coming weeks (in fact, the roll-out of CM12 was briefly halted before beginning again, presumably to allow for a little bug splatting).

Both Oxygen and CM12 were poor in the 24 hours after the first install / upgrade, so don’t panic – give the new systems time to find their feet. We’ve also noticed drain as a result of app incompatibility (which is fair – Lollipop is still very new, so bugs are still being squished by app developers).

If you take the time to turn off unnecessary syncing and notifications, and watch for rogue apps, you should easily squeeze a full day out of either OS.

OnePlus owners can rejoice: Lollipop in either Oxygen or CM12 guise is a fantastic experience. It’s fast, fluid, pretty, and effectively refreshes your ageing (in smartphone years) OnePlus.

Deciding which way to go is then a matter of deciding how brave you’re feeling. If you’re familiar with recovery, adb and fastboot, Oxygen’s worth a shot. If you’re the type who’s never tapped Build to enable Developer options, just let your system update to CM OS 12.

Which is better? It’s a matter of taste. Yes, we know that sounds like a cop out answer, but it’s also the truth.

We love the Themes Store in CM12. You can reskin your OnePlus every day, and change the tiniest of elements in the interface if they’re not to your liking. It’s great to be able to make full use of the One’s superb 5.5in screen by changing the grid size and icons.

But if we were pressed to choose between the two, we’d go with Oxygen.

Tweaking Is fine enough, but if your smartphone is a working tool, you tend to value speed and simplicity. And here, Oxygen shines. We also suspect that it’s only the beginning for the Oxygen team, and that new features will be added in the coming months.

Related › The best smartphones in the world right now 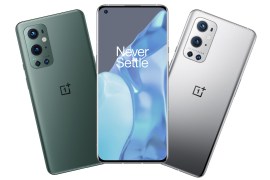 Feast your eyes on the next flagship killer

It’s a maze thing OnePlus is no stranger to brand tie-ins. There was the OnePlus 6 Avengers edition, the China-exclusive Cyberpunk 2077 OnePlus 8T, and then the recurring partnership with McLaren Automotive.  The latest partnership is with everyone’s favourite pellet-munching retro star; meet the OnePlus Nord 2 Pac-man edition. While we don’t have any official […] 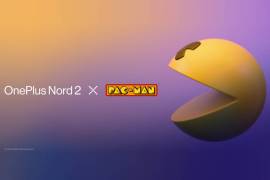