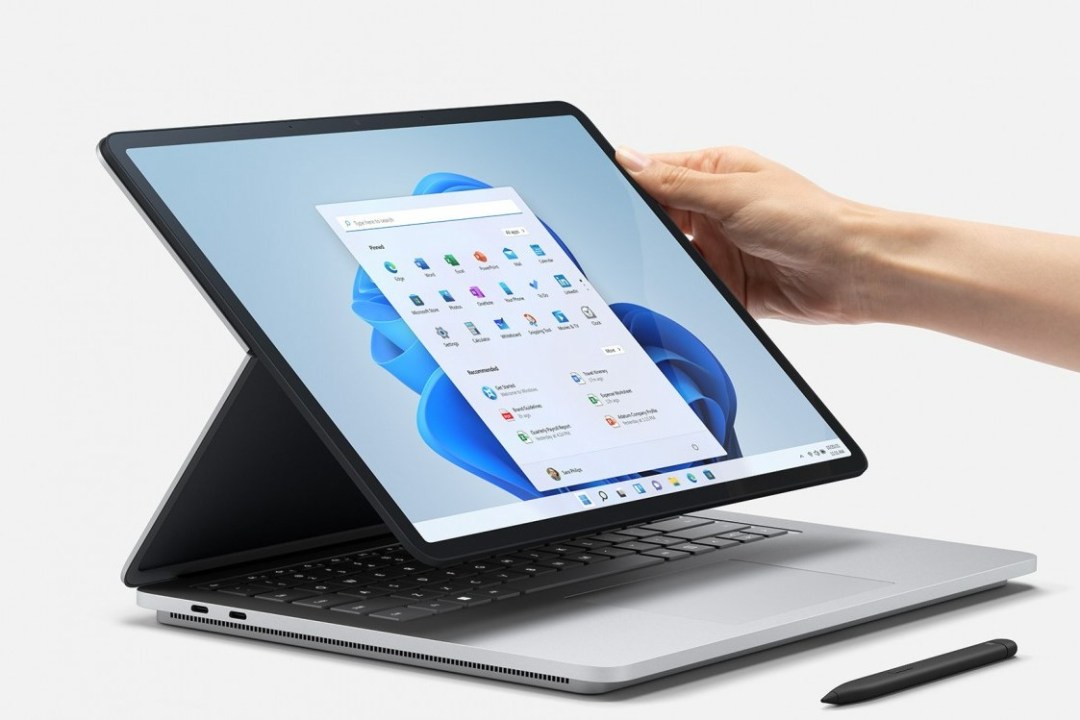 Microsoft recently unveiled the Surface Laptop Studio, with the all-new 14.4-inch device getting released in the US and Canada on October 5. Pitched at creators and professionals, it sits above another 2021 arrival, the Surface Laptop 4, in the company’s portable hardware portfolio.

That means it generally looks superior on paper – but is it actually that much better? Read on as we break down the key Surface Laptop Studio vs Surface Laptop 4 specs and other key details, so you can decide which one is right for you.

As its name suggests, the Surface Laptop Studio is designed to be an on-the-go version of Microsoft’s Surface Studio all-in-one desktop machine.

Specifically, it borrows the Surface Studio’s versatile design, featuring a hinge on the screen that lets you use the Studio Laptop in three different ways: like a traditional laptop with the screen angled, in Zoom-friendly ‘Stage’ mode with the screen covering the keyboard, and with the touchscreen completely flat and ready to work with the Surface Slim Pen 2 stylus akin to a tablet.

The Surface Laptop 4 doesn’t offer any of this adjustability, instead being designed like a conventional notebook.

In terms of connectivity, neither of these Surface devices offer a huge amount of ports, with both offering two USB ports. On the Laptop Studio, you get a pair of new-gen USB 4.0 ports with Thunderbolt 4 support. Both use a USB-C connection, and there’s also a 3.5mm headphone jack and the usual Surface Connect input.

The Surface Laptop 4 is stuck on USB 3.2 but combines old and new-gen inputs, offering both USB-A and USB-C connections. So while the Laptop Studio is more cutting-edge and further boosts its case by coming with built-in charging for the Surface stylus, the Laptop 4 might be more suitable if you have older devices you want to work alongside your laptop.

The Laptop 4 offers more choice in that it can be had in either 13.5-inch or 15-inch versions, but with a more standard refresh rate of just 60Hz, whatever’s being beamed from its QHD display won’t be anywhere near as slick as it would on the Laptop Studio, which also supports Dolby Vision for good measure.

The Laptop Studio is a pretty clear winner here, especially if you like to game alongside your work or plan to use your next notebook to regularly consume media.

Given it’s designed for performance intensive creative apps, it should come as little surprise that the Surface Laptop Studio is the more powerful of the two machines. Its standard configuration features an 11th-gen quad-core Intel H35 i5 processor (up to 4.4GHz) paired with integrated Iris Xe graphics, with the option to upgrade to a Core i7 CPU that supports a discrete NVIDIA GeForce RTX 3050 Ti GPU. On-board storage options start at 256GB and go up to 2TB for the truly file hungry, while you’ll get 16GB of RAM as standard (and can boost this to 32GB for an added cost).

The Surface Laptop 4, on the other hand, offers a variety of configurations depending on whether you opt for the 13.5-inch or 15-inch model.

The smaller version comes with AMD Ryzen 5 (including integreated Radeon graphics) as standard on the cheapest £799 option, with the option to upgrade to Core i5 or Core 7 (with integreated Iris Xe graphics). Its big sibling packs a Ryzen 7 with its base configuration, also upgradable to Core i5 or Core i7. There are myriad options, but you can expect at least 8GB of RAM and a 128GB hard drive – upgradable to either 16GB or 32GB of RAM, and an SSD of up to 1TB.

Both devices feature sizeable batteries, with the Surface Laptop Studio promising up to 19 hours of life on a single charge and the Laptop 4 saying it’ll last for up to 17 hours on a typical configuration. They’re also similar in that they ship with Windows 10, though Windows 11 is available as a free upgrade across the board.

However, the differences under the hood are plain to see. The Surface Laptop 4 offers a wider variety of configurations and the ability to tweak the internals to your personal specification may tip the balance for some user. However, when it comes to generally optimising performance, the Surface Laptop Studio wins out, not least because the option of discrete graphics means it can process even the most power hungry creative apps effectively.

With pricing starting at $1,599.99, the Surface Laptop Studio sits just below the Surface Book 3 at the top of the company’s portable hardware range. The Surface Laptop 4, on the other hand, starts at $1,000 or £799 in the UK, though this option is currently out of stock on the Microsoft website.

However, for international markets including the UK, Ireland, mainland Europe and most of Asia, availability is a big issue. The Surface Laptop Studio hasn’t yet got a confirmed consumer release date outside of North America – and that uncertainty could be decisive.

If you need a new laptop now, the Surface Laptop 4 is a quality product that should meet the needs of most users, including students. But if you’re prepared to wait and pay a bit more, the Surface Laptop Studio represents a worthy upgrade pretty much across the board – especially for creative professionals.