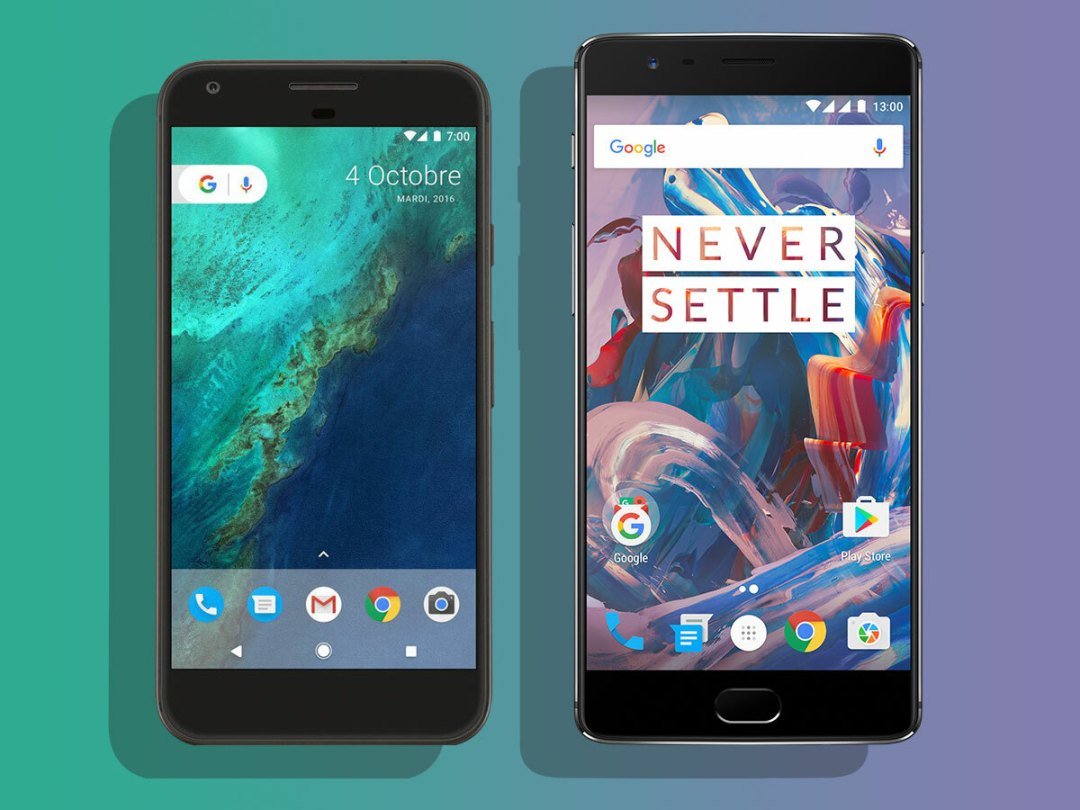 After just four months, the OnePlus 3 – our pick for the top smartphone in the world today – is no longer on the market. But that’s just because the OnePlus 3T is here.

The OnePlus 3T muddles the incredible value equation of the first version a bit with its higher price, but bumps the specs and feature equation a bit to match: you get a speedier processor, a larger battery, a couple of camera enhancements, and a new Gunmetal colour as well.

And it takes the mantle of “newest exciting phone” away from the Pixel, Google’s first-ever in-house device. The Pixel is an interesting phone, certainly: a clear attempt to bring iPhone-like style and simplicity to the Android range, albeit one that’s not fully on par with Android’s top flagship options.

In any case, if you’re in the market for a new phone and you want an Android that isn’t exactly like the top-tier offerings from Samsung, LG, and HTC, you might be considering both handsets. We’ve reviewed both now, so here’s our take on which is the better bet between them.

As is typical for flagships, both the OnePlus 3T and Google Pixel feature aluminum unibody designs and glass fronts, with the Pixel coming in at 8.5mm thick while the OnePlus 3T arrives thinner at just 7.35mm.

Overall, the Pixel can’t help but look like a faux iPhone from a couple angles, albeit with a twist: a neat two-tone backing that swaps glass in for metal on the top one-third or so. That’s kind of neat, but for the most part it’s a generic design – the kind of uneven aesthetic that comes from trying to copy an icon but not too closely.

For its part, the OnePlus 3T – which is 100% identical to the OnePlus 3 aside from the new Gunmetal colour option – isn’t the most distinctive flagship we’ve ever seen or held, but it feels pleasingly refined. And that’s at a much lower price, too. We’ll wield the OnePlus, thanks.

Also Read › OnePlus 3T vs OnePlus 3: Should you upgrade?

The OnePlus 3T keeps the same display panel as the original: a 5.5in AMOLED screen running at 1080p, which is about as good as we’ve seen at that resolution.

Meanwhile, the Google Pixel also has a 1080p AMOLED, albeit at just 5in. The slightly smaller size means you get a larger pixel-per-inch count for added crispness, but at that size, you won’t be able to tell a real difference.

In any case, 1080p is lower than we often see in top Android flagships these days, which have opted for sharper Quad HD panels of late. With the OnePlus 3T, the company opted for a 1080p panel because it’s cheaper, and that helps them sell the phone for less. But the Pixel is pricey at £599, so we can’t really explain why Google went lower-end with the screen here.

Anyway, as far as this comparison goes, it’s even – they’re both great displays, and some people might prefer the slightly larger or smaller one. The Pixel XL is the better comparison to the OnePlus 3T in size, as they both have 5.5in screens, but the XL opts for Quad HD. Also, it’s a staggering £719. But that’s not the battle being waged in this particular article.

Here’s where the extra £200 for the Pixel might make a difference for some buyers: Google’s phone has one of the absolute best smartphone cameras today, right up there with the Galaxy S7 and Apple’s iPhone 7 Plus. The OnePlus 3T, meanwhile, has effectively the same camera as the OnePlus 3 – and it’s just a small step below.

With the Pixel, you’ll get a 12.3-megapixel back shooter with a f/2.0 aperture, 1.55-micron sensor pixels, both phase and laser detection autofocus, and electronic image stabilisation. The HDR+ shooting mode is an absolute delight, capturing consistently brilliant snaps especially with outdoor exposure. And the video stabilisation is second to none.

Compare that to the OnePlus 3T, which bumps up the megapixel count to 16MP but with 1.12-micro pixels and has the same f/2.0 aperture. It lacks the laser autofocus, but still delivers strong shots most of the time. But the Pixels’s snaps are more reliably crisp and vibrant.

The Pixel and OnePlus 3T are two of the first big phone releases to use the new Snapdragon 821 system-on-a-chip, which delivers about 10% faster performance than the Snapdragon 820 from earlier this year (as seen in the first OnePlus 3).

Both are definitely among the fastest phones we’ve used, but put side by side with a recent phone running the 820, the difference really isn’t noticeable. Any flagship these days has more than enough power to handle most of your everyday tasks, and both of these are absolutely capable. On the plus side, you might be a little more future-proofed for resource-intensive apps and games or OS updates coming down the line.

The OnePlus 3T has a stunning 6GB of RAM compared to 4GB on the Pixel, but again, the phones are very comparable on performance. You’ll get stock Android 7.0 Nougat on the Pixel while the OnePlus 3T opts for Android 6.0.1 Marshmallow with the Oxygen OS skin, but it looks pretty close to stock. All told, this category doesn’t sway strongly enough towards either phone. Both are at the top of their class.

The Pixel has a 2,770mAh battery pack while the OnePlus 3T has 3,400mAh – but in our review testing, we found that the 3T’s battery seemed to discharge faster than the standard OnePlus 3 (with a 3,000mAh pack) while doing identical tasks. Weird.

In any case, both the OnePlus 3T and Google Pixel are all-day performers with average use, and we’re not inclined at the moment to think that the OnePlus 3T’s extra capacity really makes a big difference here. If the 3T gets patched and seems to resolve the extra battery drain, then we’ll take another look at this showdown.

Both handsets also have super-speedy fast-charging capabilities. Otherwise, both are missing some key features we typically want from Android flagships, including microSD support and water resistance. At least the Pixel has one big perk over the OnePlus 3T: VR support via the Daydream View headset.

Support is limited for now but could explode before long, given Google’s own support and the promise of more compatible phones and headsets on the horizon, but it’s still a nice bonus. In a category where these phones are largely pretty even, it’s a notable advantage.

Given the £70 price bump, the £400 price point of the OnePlus 3T isn’t nearly as sweet as the original OnePlus 3 – but it still seems like a bargain compared to the Google Pixel.

At £600, the Pixel comes off as overpriced and lacking in features compared to other top-tier Android flagships, and it really can’t compete with the Samsung Galaxy S7 or HTC 10. It’s a solid first attempt, but not one you’d necessarily want to spend £600 on when you have other strong options.

While the Pixel gets you a slightly improved camera, stock Android Nougat, and VR support, the £200 difference is nearly impossible to ignore, and the OnePlus 3T is a stellar pick on its own merits. While these phones are pretty close in terms of specs and features, they’re miles apart on value. And that battle clearly goes in the favour of OnePlus, as it so often does.

Pre-order the One Plus 3T here from O2