Home / Features / Drop everything and download: Kid A Mnesia

Whether it’s letting fans decide how much they want to pay for a record, making 16 hours of stolen MP3 demos available for download and giving the proceeds to Extinction Rebellion, or releasing solo albums via BitTorrent, the members of Radiohead have never been afraid to do things differently.

The latest addition to the band’s list of unconventional activities is Kid A Mnesia Exhibition – an “upside-down digital/analogue universe” created using original artwork taken from two of the band’s recently reissued albums: Kid A and Amnesiac.

Originally conceived as a physical exhibition that would travel around the world, Covid forced frontman Thom Yorke and regular collaborators, the artist Stanley Donwood and producer Nigel Godrich, to go virtual, enlisting the help of computer artists, set designers, and games developers to create a Radiohead album that you can walk through.

Exploring the halls, corridors, tunnels and chambers of Kid A Mnesia Exhibition is a bit like playing a walking simulator with the best soundtrack ever. The only controls you have are sprint and zoom, the latter allowing you to get a closer look at the artwork, slogans and graffiti that adorn many of the walls.

Its various areas are dedicated to different tracks from the album; some you just pass through as a passive observer while a version of the song plays, but others subtly change depending on your movement and position within the space. The one dedicated to Packt Like Sardines In a Crushd Tin Box, for example, almost lets you create a walking remix of the song, triggering different audio-visual elements as you move around a large floating cube in the middle of the room.

Some parts are more compelling than others – the otherworldly displays for How to Disappear Completely, Pyramid Song, and You and Whose Army? are clear highlights – but any Radiohead fan will easily be able to spend a couple of hours exploring and uncovering the world’s various secrets. Some definitely have scope for repeat experiences too.

It’s a shame the PS5 version doesn’t take advantage of any of the DualSense controller’s haptic tricks or its built-in speaker to make things feel even more immersive, and obviously, you’ll want a decent sound system connected to your TV in order to make the most of the music, but the lack of VR support feels like the only real missed opportunity.

Kid A Mnesia Exhibition is free to download on PS5 from the PlayStation Store, or from the Epic Games Store on PC and Mac.

Too spool for school? Pfft! Tapes were terrible, and the sooner everyone realises, the better 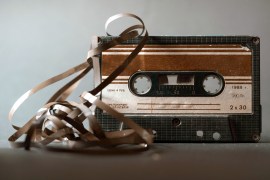