Cash in those galactic credits: it’s time to stock the Falcon with a bumper haul of Christmas goodies.

With 20 cracking presents to keep every bounty hunter, Hutt and Gungan grinning, there’s plenty here to help you feel the festive Force.

From dinky droids to brick-built ships, you might not find anything to fix that faulty hyperdrive but we’ve still got a good feeling about this list.

So go ahead, stick your hand in that stocking. Unless…IT’S A TRAP! But it’s not, so stow your blaster and read on.

Looking for something different? Our full Christmas Gift Guide 2018 hub page has categories to suit every taste, budget and interest.

Forever late for Jedi training? Stay on the right side of your master with this handy beeper styled like BB-8.

Besides ensuring you’re a punctual Padawan, give it a bop on the head and the dinky droid will do double duty as a night light – ideal for finding the keys to your speeder at 5am.

Keep getting saber burns every time you swing for an enemy? Sounds like you need some coordination practice.

Don’t bother commuting to the academy: just strap on this AR helmet from Lenovo, fire up the partner app and prepare to do battle with virtual foes. Your swing and swish will be spot on before you can say "look out for those baubles!"

Boba Fett didn’t need to wear a beanie hat to keep his clone noggin warm: he had a helmet for that.

Toasty though it is, this green beanie won’t provide anything like the level of protection or anonymity as the infamous bounty hunter’s iconic headgear – though if you pull it right down over your face, you might obtain some of the same mystique. Maybe.

Love them or hate them, the spin-offs are here to stay. Embrace the back-story with this eye-pleasing coffee table compendium.

Jam-packed with concept art, sketches, models and sets, it’s a stunning look behind the scenes of the latest flick in the Star Wars franchise – and, even if you weren’t a fan of Solo, take one look at this handsome book and you can’t help but respect the dedication of its makers. Yub nub!

Not carbonite – sorry, Han – but almost as durable, this backpack from the clever case-makers at Samsonite is ideal for galaxy-trotting travellers with an allegiance to the Dark Side.

Stylish, light and padded in all the right places, its 19-litre capacity should be good for all the rebel-crushing kit you could possibly need – and, with a pattern that falls just on the subtler side of fanboy, you can probably get away with taking it to work.

It’s probably fair to assume that this isn’t the only Stormtrooper’s head that’s been used to drink out of.

But, while Lord Vader’s disciplinary methods have always been a little on the violent side, no footsoldiers were harmed in the making of this 150ml tumbler – though an original helmet mould was used to create it.

This ticker from Nixon won’t give you the skills of Han Solo at the helm of the Millennium Falcon, but – with a gunmetal finish to match the iconic ship and dials inspired by its cockpit windows – it might just get you a free drink down at the Mos Eisley cantina. Or a punch, depending on who you show it to.

The best news? It’s waterproof down to 100m, because even the best pilots sometimes forget to take their watches off before they get in the bath.

In the words of Qui-Gon Jinn, "there’s always a bigger fish" – and, when it comes to oceanic grub, it’s the seasoning that counts.

Don’t risk giving your Imperial overlords (read: parents) a bland bit of bass: make like Obi Wan Ramsay and use these Lightsaber shakers for a galactic helping of salt and pepper. You didn’t get that Michelin Death Star for nothing.

Still struggling to convince your five-year-old nephew to stay in the R2-D2 suit and do your daily bidding? It might be time to re-think your robo ambitions.

This nifty ‘bot won’t fetch you beers from the fridge, but it will do a mighty fine impression of everyone’s favourite Astromech droid: besides emitting the beeps and boops you know and love, it’ll wheel and waddle with gleeful abandon, interact with fellow Sphero machines and respond dutifully to your in-app commands – which is more than can be said of the real R2.

Use the Force, you must. No, seriously: push those little pieces together too firmly and you’ll need the powers of a Jedi to get them unstuck. Then again, you probably want your X-Wing that well-assembled if you’re attempting a run on the Empire’s latest weapon of mass destruction.

Flick the wings from cruise to attack mode, pop your preferred pilot in the cockpit and go get your Red on. If you’re quick, you’ll be back in time for tea on Dagobah.

Feeling the Force is all well and good, but it won’t help you when you’re stumbling back to Krabbis Inn after five pints of Batuu Brew and you can’t locate your key card.

If only you’d fixed one of these handy finders to it. A nifty Bluetooth tracker styled like your favourite Star Wars icons, loop one on your keychain and it’ll ping your smartphone if you stray more than 100ft away – no mind tricks necessary.

Can’t tell your bantha from your bogwing? Pick up this comprehensive tome and you’ll soon realise what a silly wampa you were to confuse the two.

A wonderfully illustrated collection detailing the stories of more than 200 species from the Star Wars universe, it’s just the ticket for any budding biologist with an interest in going galactic – or being the next president of the Royal Society for the Protection of Porgs.

That’s no moon. Nor is it an actual Death Star, though: it’s much too small.

No, this desktop floater is in fact a Bluetooth speaker, equipped with a dinky 5W driver. Not quite powerful enough to destroy planets but, thanks to the Force-like levitational power of its magnets, plenty fascinating enough to distract your cat for hours.

Little promotes workplace efficiency like having an Imperial instrument of aerial attack constantly angled at your head.

Give your desk an aggressive upgrade with this Tie Fighter lamp: eschewing twin ion engines in favour of a trusty USB cable, it might not have the capacity to blow apart an X-Wing, but that LED glower on its nose makes late-night scheming a cinch.

Less bulky than a standard-issue helmet and a good deal more tuneful, this Stormtrooper-inspired speaker is sure to bring a smile to the face of any would-be gun-toting dogsbody.

Fashioned in fetching Imperial white, this tune-pumper is perfect for those long evenings spent on sentry duty – just make sure your Oppressive Dubstep Remixes don’t drown out any pesky rebels making off with important plans.

Give this one before the big day for a full-Force festive experience. Forget boring baubles and dreary decorations: this official set of six spheres is the perfect ornament for a droidtastic Christmas tree.

Once you’ve finished looping Leia, Luke, Obi-Wan, C-3PO, R2 and Vader around your branches, you can get back to your mind tricks and predict what’s wrapped-up beneath them.

Droids aren’t exactly known for their reliability. If they’re not wandering off on some personal, inexplicable mission, they’re antagonising Imperial forces or fiddling with garbage chutes. Little wonder, then, that they so often find themselves dented, damaged and in need of assistance.

Prepare for the inevitable repairs with this LittleBits kit: learn the ropes of droid assembly while picking up some coding tricks along the way. Ideal for when R2 rolls himself in with a wobbly wheel and a faulty LED.

Prefer something with a bit more wit? Give in to your feelings and don one of these acrylic knitted numbers – sure to make you a hit this Sithmas.

Don’t tell your little ones, but those annoyingly adorable little squawkers in The Last Jedi? They were created to digitally disguise the plethora of puffins that inhabited the island where they were filming.

Draining your phone battery halfway through a flight to Naboo is a fate worse than being frozen in carbonite. Keep your Samsung Galaxy Jedi juiced and good to go with this 8000mAh power bank – which also serves as a morbid reminder of why you shouldn’t cross the Empire on PUBG.

Deck the halls with tech for all 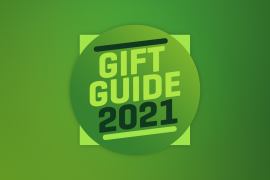