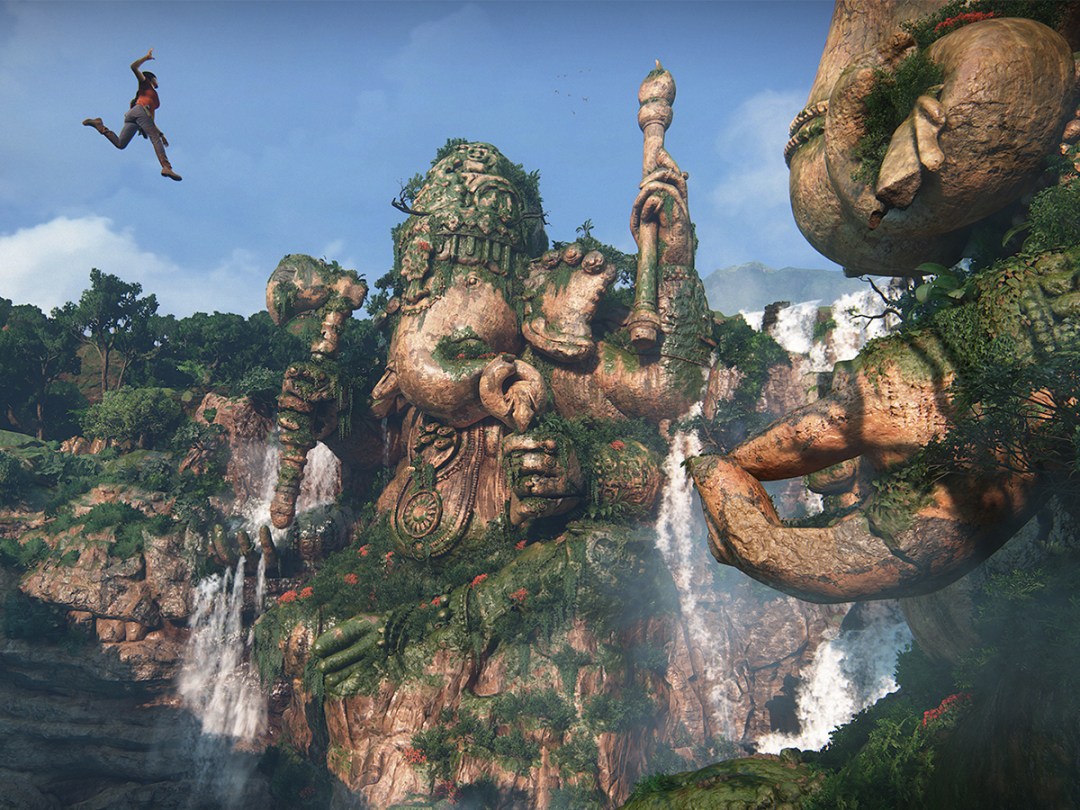 You should know how the Uncharted games work by now. Take a whip-smart lead with more one-liners than the entire Edinburgh Fringe, add plenty of crumbling scenery and an ill-defined baddie and you’ve got yourself a whole lotta fun.

In this respect, and many others, The Lost Legacy doesn’t disappoint. After Nathan Drake’s awesome last hurrah this may be the series’ first installment not to star the eternally boyish hero, but little else has changed.

Honestly, that’s for the best as well. What separates a good Uncharted from one starring Nazi zombies – sorry, Drake’s Fortune – is the story that wraps all its spectacular set pieces together and the people who find themselves leaping from one dilapidated building to another. Usually under a hail of gunfire. So it’s just as well that The Lost Legacy delivers a charming tale starring two heroines that you’ll root for until the end credits.

Look, you already know how this game plays out. You’ve seen its conceit countless times before and you’ll doubtless fall for it again next week. There’s this odd couple where one member rattles out wisecracks to mask her vulnerabilities and the other relies on brusque experience. They’ve been brought together out of convenience in search of something they can’t acquire on their own, as much as both of them might wish otherwise.

And guess what? After some shared hairy moments and surprising personal revelations, they might just achieve the impossible. Who knows? I don’t want to spoil things, but what I will say is that it doesn’t matter that The Lost Legacy is set in India and concerned with Chloe Frazer and Nadine Ross’ search for the Tusk of Ganesh.

What is of all-encompassing importance is whether Chloe and Nadine can make the jump from B-list archetypes to proper characters that you’ll actually care about. Much to my delight the ‘foxy gun for hire’ and ‘paramilitary hard-arse’ do so with aplomb. So much so that those hackneyed tags don’t really apply anymore.

A different kind of spin-off

As much as this game delivers glorious explosions of blockbuster bombast, it elevates itself above the status of a cookie cutter spin-off in its low-key moments. Very early on Chloe is struggling to lockpick her way through a door before she’s caught in the act. To help her out, Nadine takes a shortcut and smashes through its glass window. Nothing is said, yet you instantly grasp what these two people are about.

‘Fear not,’ whispers The Lost Legacy. ‘You’re going to have a lot of fun over the next nine hours or so.’

Yep, this game is neither an extended epilogue for Uncharted 4 nor a full-blown epic in its own right. Instead it’s a proof of concept for a new central pairing, a handful of fresh mechanics and a lot of the same old, same old. While Chloe and Nadine prove to be a winsome force of nature, the same can’t be said for a lot of their languid flirtation with open world exploration.

Don’t think too much…

Like any great action movie, the plot of every Uncharted is properly ridiculous when you actually have the time to think about it. That’s why you’re constantly chasing after vehicles, dashing from one rooftop to another and hurling yourself out of harm’s way. To stop you remembering the time that Nathan Drake mistakenly thought Sully had been killed because he’d been suffering from the effects of hallucinogenic water.

So it’s not exactly surprising that The Lost Legacy’s one free-roaming segment, where you can scoot from location to location in any order you please, only serves to highlight the series’ weak points. The exhaustive army of faceless goons you’ll encounter, the puzzles you’ll solve in one glance and the stealth segments that you’ll spend itching to break loose from with a shotgun. They’re all present and correct in this one chapter, and hardly paint the game in its best possible light.

Once you’re done with an hour of free-roaming, that’s your lot. You can consign the dalliance to a mental dustbin marked ‘nice ideas that didn’t really work out’ and scuttle back towards the edge of your sofa again.

Aside from an added lockpicking mechanics, one humdrum side-quest and an overly insistent photo op mode – turns out Chloe is all about that #nofilter life – The Lost Legacy is a very familiar affair. As much as it occasionally toys with tedium, these lulls are eclipsed by set pieces that’ll have you grinning from ear to ear.

It’s not often that you get the chance to rappel up a moving helicopter in real life, so it’d be truly churlish to get upset with Uncharted’s ongoing love affair with anything that might go crash, bang or wallop. Especially when these bursts of cinematic splendor are rendered in astonishing graphical fidelity. From facial animations to environmental lighting, the care and attention to detail here is just astonishing. Not yet upgraded to a PlayStation 4 Pro? This game just might convince you otherwise. It’s one one of the most thrilling games you can play on any console right now.

As a new beginning for the Uncharted series, it’s hardly surprising that The Lost Legacy doesn’t quite scale the transcendent heights of its predecessor. You just don’t yet have the same weight of affection for Chloe and Nadine as you did for Nate and Elena. That stuff takes time to establish, and that’s time this new duo deserve given the strength of their latest adventure.

Having outgrown their roles as sidekicks and sub villains, they’re all teed up for a shot at a proper numbered sequel. For now, ‘more of the same’ is fine by me when it’s told this well.

Chloe and Nadine are great company

Free-roaming is a drag

Underlying schtick is the same as ever