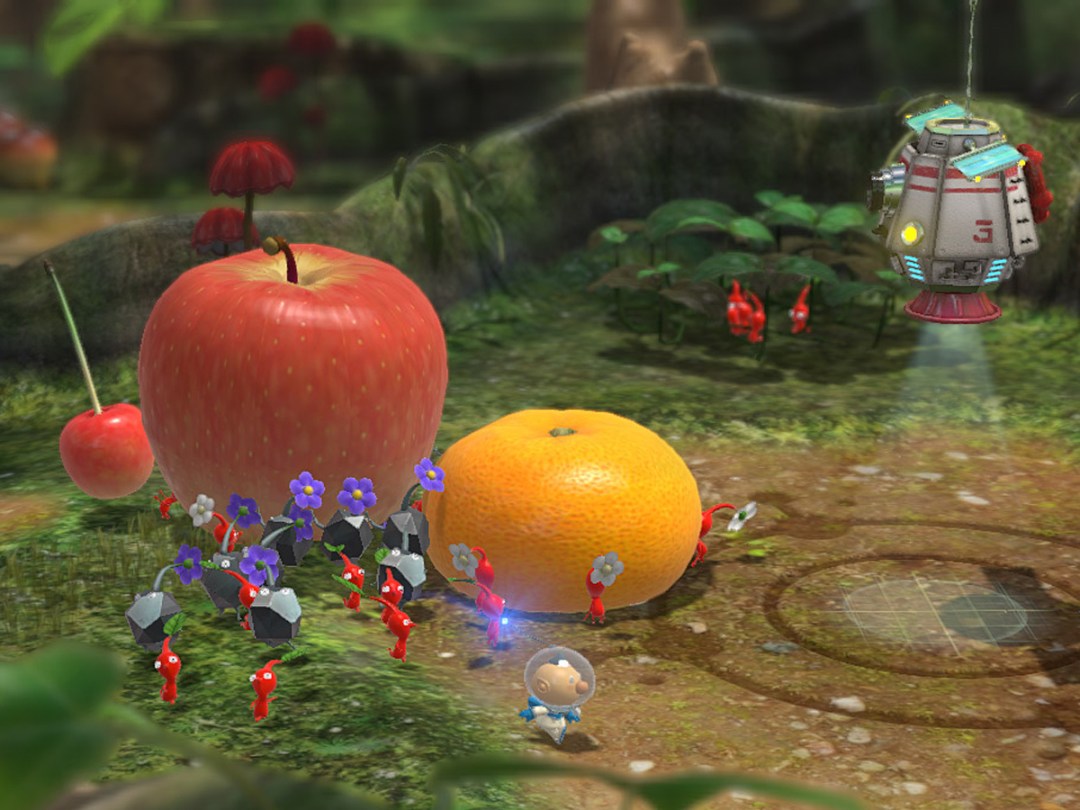 If you ever need proof that Nintendo thinks differently, Pikmin 3 would be prime evidence.

It’s a real-time strategy game but there are no soldiers, battlefields or tanks. Instead there are armies of primary coloured plant people, a garden landscape and oversized fruit to collect.

The third Pikmin, the first in nine years, follows three pint-sized astronauts who have traversed the galaxy in search of food to satisfy their people’s insatiable appetite only to crash on arrival. Luckily they’ve crashed on the planet of the pikmin, a race of flower-headed creatures keen to help the titchy space travellers.

The story mode of the game is a Robinson Crusoe-esque affair where the marooned heroes must gather fruit to eat and recover the equipment they need to return home using armies of pikmin.

But this garden world is no bed of roses. It’s crawling with pikmin-munching bugs and nocturnal predators that limit progress to daylight hours. Since the trio can only explore during the daytime, every day is a race against time to gather food, grow pikmin and crack the environmental puzzles that impede your progress. Run out of food or pikmin and a grisly end awaits.

Achieving your quest for your five-a-day demands wise use of the pikmin. There are five varieties of pikmin in the story mode, each with their own abilities and deploying them effectively is key to success. Facing a fire-spitting foe? Then call in the fire-proof red pikmin. Need to bash down a crystal wall? Then gather up your hard-as-nails rock pikmin.

But while many real-time strategy games suffer from overly complex controls, Pikmin 3 streamlines almost every action to throwing your selected pikmin at various targets, whether that’s a dangerous bug or a giant bunch of grapes to carry back to the ship, by pressing A.

The controls might be super-simple but the multi-tasking and puzzle-solving involved ensures that Pikmin 3 is no lightweight offering. With so much to do each day the game soon has players divvying up their pikmin hordes into separate groups charged with different tasks.

While you’ve got some breaking up a wall, others are building bridges out of old slate and more are assaulting irritable water beetles while somewhere else on the map you’re trying to figure out a way to reach a seemingly inaccessible peach worthy of Roald Dahl. Again the simple GamePad controls make switching between your pikmin squads a breeze.

On top of the story mode, Pikmin 3 offers two extra modes. The missions mode challenges one or two players to gather up treasure or fight monsters against the clock in a collection of standalone maps. The second mode, Bingo Battles, is a competitive split-screen two-player romp where each player races to collect the fruit they need to complete a line of citrus-themed bingo cards. Both are entertaining but Bingo Battles proves the most enduring with plenty of room for frantic tussles for a coveted fruity treat.

Pikmin 3’s core real-time strategy and puzzle-solving action is sublime but the game’s whimsical personality is just as beguiling. The overgrown garden worlds teem with life and detail, from broken plant pots to the excitable way the pikmin follow your path like a line of caffeinated ants.

The story mode also layers on the charm with the banter and daily reports by the crew members as they mourn lost pikmin, grumble about their empty stomaches and write terrible poetry. The only downside is that since player’s progress is not fixed, the daily reports they write tend to repeat later on and sometimes don’t match how your latest escapade went.

Pikmin 3 is a slow burner of a game, building gradually into a absorbing cocktail of real-time strategy, adventure and puzzle-solving that sparkles with fanciful charm. It’s a game that signals that, finally, the post-release drought of quality games that has blighted the Wii U is over.

It’s not the only top class Wii U game but it is the only one impressive enough to make our top ten list of the best games you can play.