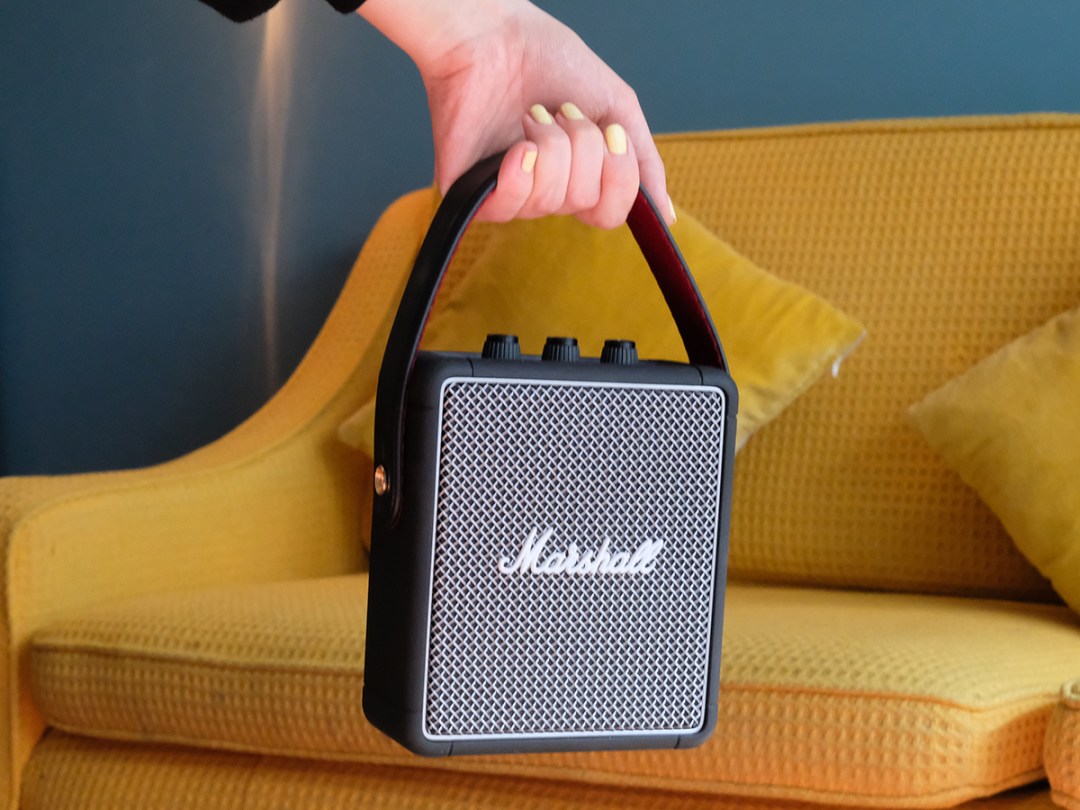 It takes a bit more than a readily identifiable logo to make a good portable wireless speaker but, blimey, it doesn’t do any harm.

The venerable ‘Marshall’ logo has more in common with ‘Ford’ and ‘Coca-Cola’ than just a really fussy font – it’s iconic. It’s rock’n’roll. And, lately, it’s found itself plastered on an ever-increasing range of speakers and headphones.

Questions: does it mean anything? Is ‘Marshall’ a guarantee of quality? Or has is devolved into mere marketing?

Design and build: Bags of style

There’s certainly some design evolution here. The original Stockwell speaker was a landscape shape with an integrated stand – Stockwell II is more portrait-y (although at 18 x 16 x 7cm really it’s almost square), with a carry-handle.

The usual Marshall design cues are to the fore, though. Obviously. What’s the point of having an iconic logo if it’s not front-and-centre? In this instance it’s mounted on a metal grille that’s reminiscent of microphone mesh, and sits on the front of a water-resistant silicone-finished cabinet. On top there are volume, bass and treble controls, along with a button for Bluetooth pairing and a battery-health indicator.

And to hammer home the ‘portability’ message, there’s that fuzzy-lined carry-handle that’s meant to be reminiscent of a guitar-strap. It makes the whole affair reminiscent of a handbag, if you ask me (nobody’s asking me).

So far, the news has all been positive – even if £220 spent elsewhere can buy more physical presence than the Stockwell II musters. When it comes to audio performance, though, the positives are somewhat qualified.

On the plus side, the Marshall sounds crisply focused if it’s directly facing you. The high end is nicely judged, with enough rattling attack to Szun Waves’ High Szun to bring some urgency to the percussive sounds. The same tune demonstrates just how neutral and natural the midrange is – and with a switch to the close-mic’d vocal of Kate Tempest’s Firesmoke it becomes even more apparent the Stockwell II can communicate easily and explicitly.

There’s plenty of detail revealed in each tune, and a reasonable sense of vigour to the Szun Waves file while the down-tempo Kate Tempest simmers without much effort. Even from the dead-ahead, though, there are issues with the way the Marshall delivers bass.

There’s quite impressive bass extension, and low frequency sounds are nicely textured and reasonably well detailed. What they aren’t, though, is on much beyond nodding terms with all the audio information above them. The bass drum and bass guitar of Radiohead’s The Numbers sounds slightly remote from the rest of the recording – while the low end doesn’t lack for presence it doesn’t sound securely attached to the rest of the performance.

The result is not dissimilar to listening to two songs at once – or, perhaps more accurately, listening to a song while your next-door neighbours play a different song at anti-social volume.

This relative lack of integration and unity impacts negatively on all the good work the Stockwell II does elsewhere. It impacts on timing, and it doesn’t help the Marshall manage rhythms and tempos as convincingly as it otherwise might. Even a tune as benign (in terms of bass action) as Big Thief’s Contact ends up sounding like a game of two halves.

This trait is only aggravated by listening to the Marshall off-axis. The rear-firing tweeter, allied to the rear-venting bass reflex, certainly helps create an impression of multi-directional sound – but it doesn’t help the Stockwell II’s efforts to produce a unified sound all that much. If anything, there’s a slight Doppler effect, with sounds produced by the rear of the Marshall’s cabinet quite obviously emanating from a different position. Every listener can detect even the minutest latency, even if they don’t know that’s what they’re hearing – and there is a minute amount of latency here.

Which is a pity, because in most other respects the Stockwell II is likeable and listenable. It’s not the loudest portable Bluetooth speaker you ever heard, but it’s more composed and more detailed than most. It’s really well made and finished, and if you like the aesthetic then it’s a great looker too. Right up until the moment you consider its bass ability, it’s as good a portable speaker as £220 can buy.

If you’re partial to the Marshall aesthetic, the Stockwell II has all of the looks – but its low-frequency problems mean it needs thinking about (and listening to) carefully before you commit your cash.