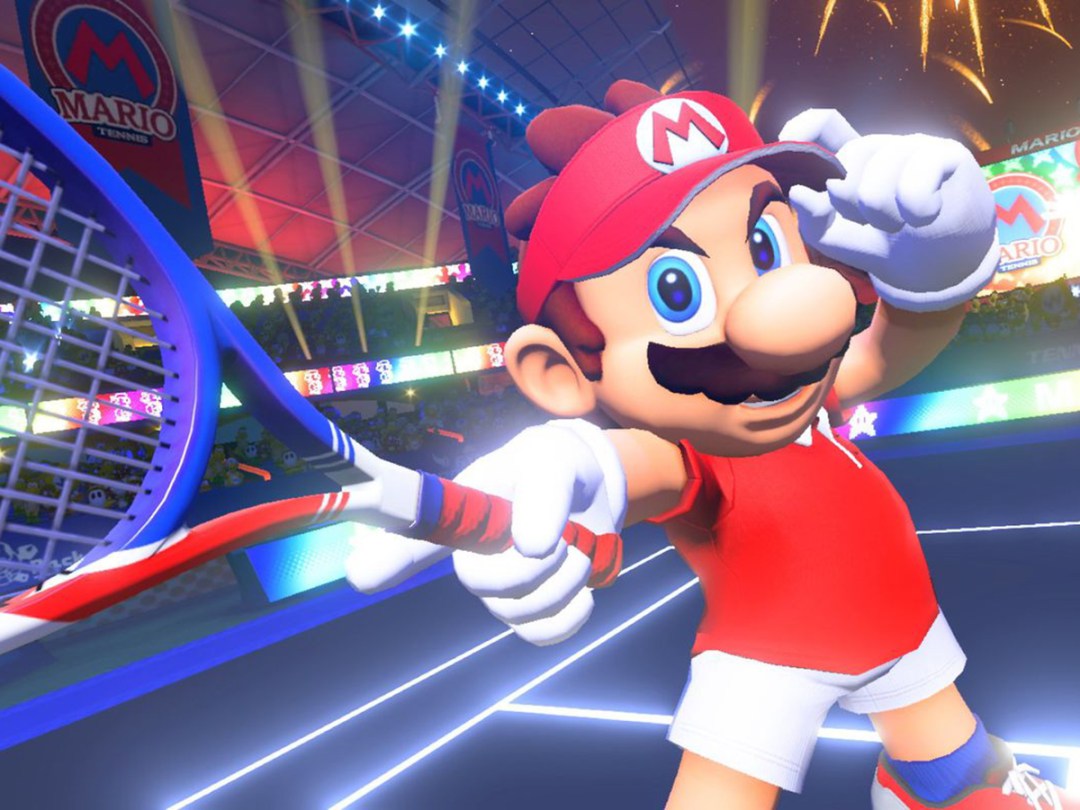 The Mario Tennis series is back – and just in time for the mustached plumber to get a Wimbledon invitation.

But instead of simply replacing the likes of Murray and Nadal with Nintendo’s wacky cast, this Switch title has put a new spin on the sport.

With a plethora of super-charged moves and an adventure mode packed with oddball challenges and boss battles, Aces is as delightfully Nintendo as they come.

In fact, it’s easily one of the most exhilarating and competitive titles on the Switch yet. Too bad it’s shy of a few online features to grant it residence in Nintendo’s multiplayer hall of fame.

In previous Mario Tennis entries you’d mostly rely on the same moves your average tennis player has up their sleeve: lobs, slices topspins and flat shots. These all make a welcome return in Aces, each providing tactful and rewarding methods of defeating your opponent.

Now though, Mario and co have also gained a slew of super-powered skills that even an at-his-prime Roger Federer wasn’t capable. They can momentarily pause time to aim their shots, slow down the ball to make it easier to hit or even trigger a ‘special shot’ that’s so powerful it can instantly shatter the opponent’s racket and get them disqualified.

This move isn’t quite an ‘instant win’ button, though, as it’s possible to counter these ‘special shots’ with a perfectly timed block. This adds a surprising breadth of tactics to Aces. Do you risk the destruction of your racket by attempting a block, or play it safe by stepping aside and surrendering the points? As a result, tennis matches become just as much a wars of wits as they are a battle of reflexes.

Don’t think you can just spam these special moves though – they all use up a chunky portion of your energy gauge. Managing this meter successfully can be the difference between success and failure. You can speed up the rate your energy bar replenishes via skill moves – which sees your character somersault across the court – or by charging up your shots.

Admittedly, this big focus on the energy gauge won’t be for everyone and it takes a good while for everything to click. But once you embrace the over-the-top abilities and realise that Aces is as much a tennis game as Mario Kart is a racer, then you’ll start to enjoy the game a lot more. And while there is a very steep learning curve to master all of these new abilities, the Adventure mode does a fantastic job of teaching you.

While Wimbledon’s off-court drama peaks at sweating over Andy Murray’s injury, Mario’s tennis tournament has more turmoil than an episode of Love Island in the new story mode, as a possessed tennis racket kidnaps poor Luigi. At least Princess Peach gets a day off being the damsel in distress.

In order to save Mario’s brother you must complete various creative challenges that often stray from your typical tennis match. Some of the highlights include a time trial where you launch flaming balls at a bunch of fiesty piranha plants, and a tennis match with Boo the ghost where magic mirrors intervene by deflecting your shots right back at you. Sure, both of these levels sound bonkers on paper, but in reality they feel totally natural and refreshingly original.

However, there are also a couple of levels where Nintendo’s quirky features became more frustrating than fun. The ship stages in particular lacks any sort of imagination by simply putting a mast in the centre of the court as an irritating obstruction. Fortunately, these poor level designs are generally an exception to the rule.

The best thing about the Adventure mode, though, is that every level helps to train you on a specific move or ability, whether it’s perfecting your timing for blocks, or practising how to lob the opponent. In fact, the whole of the single-player campaign is effectively one long – but crucially fun – tutorial, with a smattering of ingenious boss battles that test you on everything you’ve learnt up to that point.

Worried that it’s all going to be too easy? Surprisingly, that’s not the case thanks to Aces‘ excellent learning curve. There are even a couple of brutally difficult optional challenges for those who want to take their training up a notch.

As welcome as the story mode is, it’s not the star attraction in Mario Tennis Aces – that would be the multiplayer. The 1v1 matches I played both online and against the computer were addictively fun, with the new special moves adding more tension, strategy and hilarity than in previous entries.

The unique traits and skills of each playable character also gives matches more depth and variability. Previously, the only difference between the likes of Mario and Bowser would be their power, speed and ability, but they now have their own special moves too. For example, with the trick shot Mario will sommerault into the air, while Bowser tucks up into his shell and spins across the court and Waluigi performs an amusing moonwalk.

Not a fan of the new special moves? You’re free to turn them off and have a straightforward game of tennis in multiplayer, which will no doubt be used by ultra-serious competitors for online games. Rather strangely, though, this isn’t an option in the single-player tournament.

Even more bizarre, online tournaments are only available on certain days as part of planned events. This leaves the online experience feeling rather shallow on your average day, which is a big disappointment considering Aces has so much potential as a competitive multiplayer.

On the positive side, there’s still a great deal of variability in Mario Tennis Aces. I really appreciate the Swing Mode, which dilutes the complexity of tennis matches and replaces button-mashing for motion-sensing swinging, not too dissimilar to Wii Sports. There’s not a lot of lasting appeal here admittedly, but it’s still a great option to have for family gatherings and parties due to its pick-up-and-play simplicity.

Aces‘ new special moves turn the casual back-and-forth into a frantic high-speed chess match, while the story mode offers an ample number of charmingly wacky challenges that help to hone your skills in the process and get you match fit for online competitions.

But here’s the problem: you’re only given the option of one-off matches against friends and strangers for online. At launch there are no tournaments, no leaderboards and not even any sort of ranking system, so it’s going to be difficult to find someone on you skill level. Sure, there will be timed events that will see online tournaments become available for select days, but that’s still very inconvenient for the average player.

But if you’re happy to just play through the short adventure and reserve competitive matches for your friends, then Aces is undoubtedly one of the best multiplayers on the Switch right now.

The Adventure Mode is a terrific teacher

A couple of of level designs are infuriating in Adventure Mode