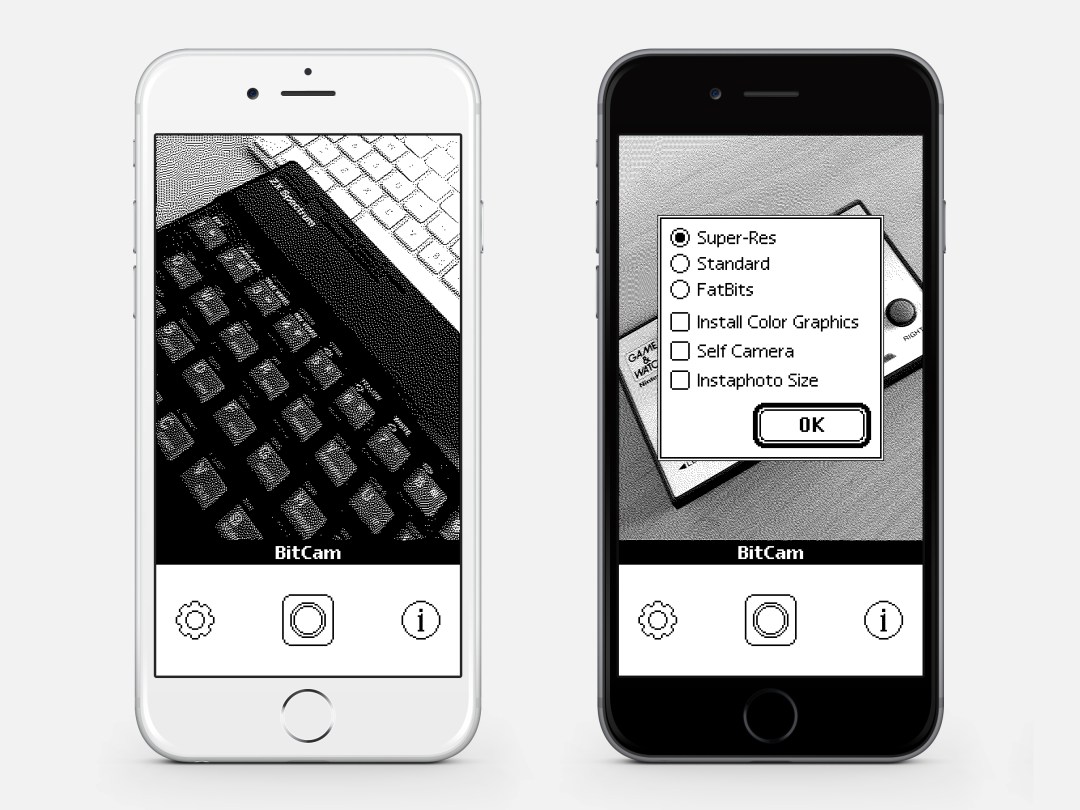 If there’s one inevitability about iPhone photography, it’s that as each generation of hardware forges into the future, app creators will wrench it back into the past. And so it goes with BitCam, which amusingly takes the 12MP sensor in your smartphone and uses it to shoot photos that look like they’ve been spat out of a Mac Plus.

The filter works live, enabling you to see the world through the lens of an ancient Mac, with all of the rather wonderful dithering of a robot Bill Atkinson. We’ve seen this sort of thing before, of course, but BitCam feels like a labour of love rather than just another filter app.

Everything about BitCam exudes old-school charm. Curves in the icon and interface are jagged black pixels on white backgrounds. Tap the settings button and a window zooms in from the bottom-left, just like they used to. Even the checkboxes and OK button seem sneakily snatched from Mac software of old.

Said checkboxes provide BitCam’s few options. There are three resolutions, a ‘Self Camera’ setting that switches you to the FaceTime camera, ‘Instaphoto Size’ for a square crop, and ‘Install Color Graphics’. The last of those is a £1.49 IAP, to bring ‘8 vibrant colours’ to your photos, if monochrome isn’t your thing.

There is a sense BitCam’s elegance comes at a price. It’s very live-oriented, so you can’t quickly use its filters with existing imagery. (There is a Photos extension for black-and-white filters, but not colour.) And it doesn’t save a ‘clean’ version of your photo, so probably don’t use it to record life’s most important moments.

Also, it’s quite clearly geared towards Mac-heads, or people who just love that classic black-and-white pixel effect. But that’s the point. If you’re looking for range, try the superb Retrospecs; if you simply want to party like it’s 1984, BitCam is an excellent freebie download.

BitCam is available for iOS. The developers even made a retro promo website.

A digital camera that thinks it’s a 1984 Mac. Charming, faithful, oddly beautiful, and fun to mess around with.

Extremely simple to use

No using filters with existing photos