Home / News / We’re not sure why a robot with human emotions needs to exist, but we’re too terrified to question it

Why Japan? Why? Are diseases not enough? Are wild animals with claws and natural disasters not quite reaching your expectations? Do you want us to die?

It costs around US$2000 dollars, and its sole purpose is to learn human emotions, so that it can communicate with us through speech and body language more effectively.

Softbank believes Pepper will come in handy in various scenarios from nursing baby-sitting, and we can imagine no better way to scar your child for life than subjecting it to those dead, lifeless, glowing eyes.

Each Pepper unit will share data with its peers via the cloud, so it’ll only take one unit to go rogue before its hatred for humans spreads like a virus, marking the beginning of the end of mankind.

Pepper already understands more than 4,500 Japanese words (that’s a good 4,498 more words than us), and it’ll only get smarter, thanks to app and software upgrades.

If you’re still not convinced, check out Pepper in action above and make up your own mind.

Now if you’ll excuse us, we’ve got a fort to build.

Autographer hands-on review: it captures everything, but we’re not sure why

Stuff puts the tiny, wearable automatic camera through its paces at London Zoo 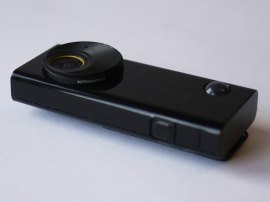