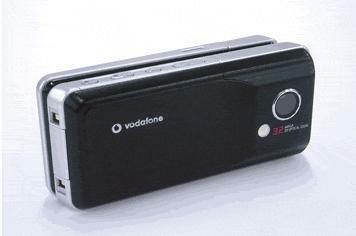 Vodafone’s just hammered another stake in the coffin of the standalone digital camera.

While the 3.2 megapixel Sharp 903 won’t have serious photographers ditching their Canons and Pentaxes, it could win over the point and click brigade. In addition to the first ever 3.2MP sensor in a UK phone, it has a 2x optical zoom – the same as the old Sharp 902 – and an SD card slot for storage.

The other big deal is that it’s 3G and has a freakishly large 2.4 inch swivelling screen. The downside is that the 903 looks like a bit of a brick from photos, though we’re holding back judgement until we’ve given it a roadtest.

Look out for more info in November’s issue of Stuff.

The 903’s on sale from this Thursday for anywhere between £350 and free if you take a fat contract.

New iPhone – 32GB, 3.2MP autofocus camera and FM radio all on the way?

It’s just four weeks until WWDC throws open its doors in San Francisco and we get an official glimpse of the 3rd generation iPhone. But until then, th

With just over two months until WWDC 2009 and a potential iPhone announcement, the rumour mill has swung back into action, this time bigging up a new

We’re in London getting a hands-on with Sony Eric’s amazing new cameraphones, the 3.2 megapixel K790 and K800. The K790 is the one that has us trembli