Meet the first UK phone that can pick up digital radio and live digital TV broadcasts.

Due on an unannounced date later this year, The Trilogy is Virgin Mobile’s stab at shedding its techno-tardy image. Unlike today’s mobile telly offerings from Vodafone and Orange – which both use 3G – this newbie has a special DAB radio that’s capable of tuning into TV and the likes of 6 Music on digital radio.

The TV channel line-up isn’t likely to be announced until March or April, but an educated guess is that it’ll include both Sky and Channel Four stations – both took part in The Trilogy’s trial.

And what of the phone itself, gadgeteers? Well, it’s made by HTC – they of SPV, iMate JAM and XDA fame – and runs the latest version of Windows Mobile, 5.0. That means Blackberry-style push email, playback of Naspter-bought WMA music and and the usual panapoly of pocket Outlook functions we’ve come to expect from Windows smartphones.

Specs are solid rather than outstanding – there’s a 2.2in for watching telly on the toilet, a 1.3MP camera and a MicroSD memory card slot to store tunes, vids, photos and more.

The technology behind the DAB TV comes from BT, who reckon the phone is likely to go on sale late summer. We’ll have more details as they emerge – this is definitely one we’ll be keeping an eye on. 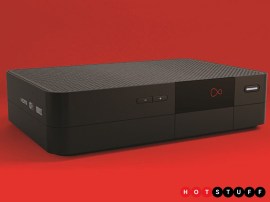