Virtual reality already has some big players in the market – everyone from Oculus and HTC to Sony, Samsung, and LG, plus Google and Apple both rumoured to be mounting their own major moves. But it’s still a very young industry, and there’s room for more competition.

And the latest headset, announced today at the Game Developers Conference in San Francisco, could fare well by being not only a standalone device but also a hybrid. It’s the Sulon Q headset, and it’s powered by its own AMD CPU and GPU, meaning there’s no need to link up a PC or console, nor do you need to slide in a smartphone. It’s wireless and fully self-contained.

On top of that, it’s not just a virtual reality headset: it’s an augmented reality device, too, much like Microsoft’s intriguing HoloLens. In fact, it uses Windows 10 for its “spatial computing,” as Sulon calls it, and promises holographic interfaces in your space. The Sulon Q uses lenses on the front to capture your space, and then fills it with digital, interactive content.

And it’ll use those technologies together to provide experiences you might not find on an Oculus Rift or HoloLens alone. According to the company’s blog post, the Q uses “spatial redirection for endless virtual walks,” using “smart perceptual tricks” to make your flat seem larger than it really is. If only that trick worked in real life!

Otherwise, Sulon’s biggest perk is the lack of tethering. It promises "console-quality graphics" with an AMD FX-8800P processor with Radeon R7 graphics, utilising 4 CPU cores and 8 GPU cores. Furthermore, it has a 2560×1440 OLED display built in, along with a 110-degree field of view and 3D spatial audio with custom earbuds.

Based on the imagery, it looks like some of the hardware is found on the unit that rests behind your head, which should distribute the weight pretty evenly, although the likely downside of an untethered unit like this is probably battery life – especially if the HoloLens may only last a couple hours itself. And the Q is probably not as powerful as the Rift hooked up to a meaty PC, but the VR experience should be more impressive than, say, the Gear VR.

It won’t be long before we all find out, however: Sulon says the headset will release later this spring, although there’s no word yet on pricing or what kinds of games and apps will be available from the outset. Still, it’s a promising contender, and could be a nice middle ground for anyone who doesn’t want to shell out for a new PC for the Rift or HTC Vive.

Read More › You’ll soon have one of these strapped to your face. But which? 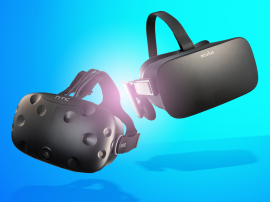 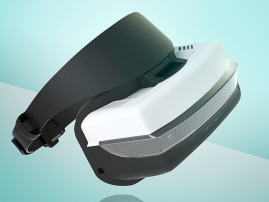 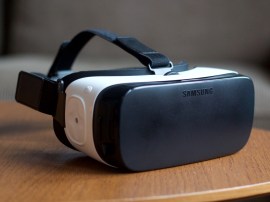