Sphero is no stranger to the world of connected play, and the company has announced that its latest addition to its physical family, is launching in the UK

Revealed earlier this year, the new Sphero SPRK Edition has a transparent outer shell, allowing you to ogle its internal components – but there’s more to this version than motherboard voyeurism.

A brand new app allows consumers to run programs to control the smart ball’s movements and LEDs, by using visual drag-and drop coding blocks that represent Sphero’s own C-based coding language called OVAL. This means that giving orders to your rolling friend will be more complicated, but far more rewarding.

You can also drive the SPRK around with regular controls if you fancy taking a break, and it’ll work with existing Sphero apps and games too.

The SPRK edition is aimed at complete beginners as well as the most seasoned of programmers, so as long as you have a curious mind and a passion for tech – this might be one to watch for the Christmas list.

It’s available now online and in stores for £130, whilst the SPRK app is free on both the App Store and Play Store. If we get our hands on one, we’ll be sure to let you know what we think.

The friendly face of coding 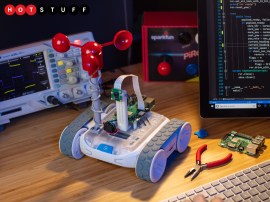