Barely a year since Fossil canned its range of Palm-powered watches it’s back, with an announcement that it’s been working with Sony Ericsson on Bluetooth-enabled timepieces. All we have so far are the names of the Fossil designs: the ‘Abacus MobileWear’ and ‘Fossil Caller ID’. No prizes for guessing what the latter does. The first one, which shares the branding of the ill-fated Palm watch is anyone’s guess. But, if rumours are true, the more interesting developments could come from the Sony Ericsson side. It’s also launching some co-developed watches with its own branding. Rumours which surfaced on Esato suggest a Walkman-branded watch that will control the phone’s music functions and have caller ID. More details as we get ’em. Update 28/09/06 Sony Ericsson’s now given us the low-down on its side of the partnership. Its MBW-100 watch (pictured) is a mix of old school and new with an analogue fascia and a tiny slit of an OLED display for caller ID. Controls let you reject calls and play, pause and skip music. It weighs in at a meaty 185g, giving the likes of Casio’s G-Shock watches a run for their money. Continued…

The standard design is stainless steel, though there will be a limited edition black version. And don’t go answering calls underwater just because it’s resistant to 30m. Compatible phones are the K610, K610i, K618, K790, K800, V630, W710, W850, Z610 and Z710. No doubt this is the first of several Sony Ericsson watches to come. We’d like to see a decent display with photo ID and full track details on there – but this’ll satisfy the Bond in us for now. 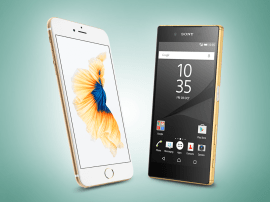