Sharp has revealed its 1920×1080  AQUOS Quattron 3D XL TV lineup which will be the first from the company to offer its Moth Eye technology.

Obvious insect jokes aside, the fancy new screen tech is designed to reduce glare and display rich deep blacks, while the fact that Sharp has again squeezed a yellow sub-pixel into the ranks of the standard RBG affair should result in bright, vivid colours.

The Sharp AQUOS Quattron 3D XL TV will be out in Japan from the end of November in 46in, 52in and 80in variants (with 60in and 70in models expected mid-December).

UK gadgeteers will have to sit tight for any release dates or pricing info, but as always we’ll be sure to let you know.

How to charge your phone anywhere, for free

New smart TV system, new Wii-style remote, plus the good old Ambilight all wrapped up in a sweet new design 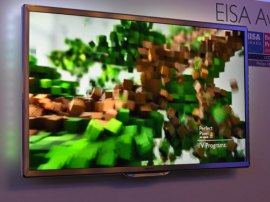 In these days of financial disaster, buying yourself a top notch TV might not be top of your to–do list. But if you are planning on hunkering do