Home / News / Netflix: by the time broadcasters are doing 4K, we’ll be on to the next thing

We’ve just returned from a visit to Netflix’s headquarters in Silicon Valley, and have brought with us the company’s predictions for an even streamier future for TV shows and movies.

Greg Peters, Chief Streaming and Partnerships Officer, points out that Netflix being the first proper way to get 4K (with House of Cards) means we’re now at the point that “if you want the best video quality out there, it’s being delivered over the internet”.

But what’s most interesting is that he sees this as being just the start and that the future for broadcasters is a bit uncertain. “Other distribution forms will never really catch up”, he reckons. “Some folks will eventually broadcast in 4K, but by the time they’re broadcasting in 4K we’ll be doing 60fps, 120fps, 12bit colour, higher dynamic resolution. We’ll be pushing the frontier at internet speed”.

The point is that Netflix can constantly update, upgrade and evolve its streams, and that will keep them ahead of what broadcasters can offer. Given that even Sky’s 4K service still seems to be around two years away, it’s currently hard to disagree with him.

The future for disc-based 4K is even bleaker, Peters says: “we probably should have seen the last of disc-based technologies. They might try and iterate on that but based on [the 4K Netflix already offers], why would you go back?” Ouch.

That’s not to say 4K viewing’s going to go through the roof just yet – Peters reckons it’ll be a year and a half or so before 4K even accounts for just 1% of what’s streamed on Netflix. But from that point he thinks it will accelerate much more quickly as 4K TVs become cheaper and more widely available.

He also thinks it’ll be a year or two before adapter products in the vein of a Roku or Chromecast come along, and that’s quite a problem for projectors and TVs such as the just-launched B&O BeoVision Avant, which lacks a built-in Netflix app and therefore currently has no way to actually access 4K content.

We also had a chance to speak to Todd Yellin, VP of Product Innovation, who talked us through the way Netflix tests new features.

“We’re fanatical, old-school scientists at Netflix”, he says. “We come up with something that we think is better and we push it out to 50,000 new users who’ve got no idea they’re in a test, 50,000 other new users could get something else, and another 50,000 get the existing design, and then we sit back and we watch. We watch how they behave, and the thing we watch for is do they stick with the service? They don’t know they’re voting with their wallet but they are”.

There’s actually a huge board in the Netflix office that records each new little feature (codenamed, unfortunately for us) and tracks the percentage change this has on user retention. Yep, they take this stuff very seriously.

But don’t go thinking the company is all maths and no fun – new staff perform musical routines as part of their induction, there’s a huge cinema room for showing off the latest Netflix Originals, and there’s a fresh popcorn machine in the lobby. That last idea is definitely getting passed on to the money men at Stuff Towers.

Find out more about the 4K vs 8K standoff and how to get 4K and 8K content. Plus what you should do if you’re buying a new TV 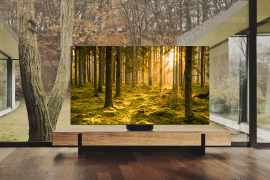