Surface fans, mark October the 12th in your diaries: Microsoft will be hosting its next big hardware reveal event to kick off the Ignite developer conference, and you can bet there’s a few new devices on the horizon.

Officially Microsoft has only said it “will be talking devices” at the event, which looks set to be online-only – the same as every Surface launch since the start of the pandemic. But given rumours of a Surface Pro 9 and Surface Laptop 5 have only recently… well, surfaced, it seems a dead cert both will take centre stage.

WinFuture reported that the Surface Pro 9 was in line for 12th-generation Intel processors, along with a separate ARM-powered model that’ll use a Snapdragon 8cx Gen 3 chipset. Forest and Sapphire will apparently be added to the colour palette, with up to 1TB of on-board storage and 16GB of RAM the likely customisation options. It also claims the AMD Ryzen-powered Surface Laptop 4 isn’t going to get an update, with Intel being the chip of choice for 2022 and beyond.

All we have to go on so far is the save the date image, which looks hand-written and has a stylised version of the Windows 11 background behind it. We get major Surface Pen vibes from the text. The launch follows quickly on from the Windows 11 H2 update, the biggest bump to the operating system since it arrived a year ago.

The event will be streamed on the Microsoft website, with everything set to kick off from 3PM GMT (10am local time). 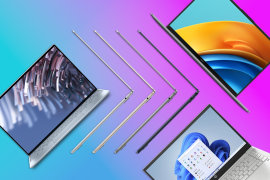 Mac vs PC? How to choose between Apple and Windows laptops

Should you embrace Apple’s macOS and iCloud-enabled ecosystem or will a Microsoft Windows 11 PC give you more bang for your buck?