Delivery drones – haven’t we seen these before?

Yes, we have. In fact, Amazon has been running extensive tests of its flying post-bots in Cambridge, UK, for a while – but this new idea from Ford is something different. Forget about simple aerial box-drops: Autolivery is all about automating the entire delivery process.

Really? Sounds more like one of those respray garages from Grand Theft Auto.

Or those vinyl stickers that make your Vauxhall Nova GSi look all super-speedy, like. Yeah, it’s an interesting name. As Ken Washington, Ford’s Vice-President of Research and Advanced Engineering explains, “it’s a play on words that brings together automation and delivery.” Quite.

Actually, though, Autolivery is a system of self-driving vans and drones that will operate in urban areas to make package processing straightforward – and people-free.

What’s wrong with the good old courier, though?

Well, like the rest of us, Ford is bored of being stuck in traffic – and it reckons that by automating the process with a synchronised fleet of self-driving vans and drones, it’ll be able to beat the queues and drop your latest orders right on your doorstep.

Even if I live in a penthouse on the 25th floor?

Surely you should have a helicopter of your own, then? In any case, apparently the answer is yes. Ford’s trying to conquer the “last 15 metres” – widely believed to be the trickiest part of any delivery service. Getting your boxes from planes to vans to drones is simple, it seems; trudging it up the garden path? Not so easy for a robot.

A combination of automated drones, vans and various bots should make it possible, though – provided the retailers play ball and you’re happy to take your box from a ‘bot.

Nope, and Ford knows it. That’s why it has also crafted a clutch of concepts to solve the urban mobility problem. Carr-E, for example, is a little round ‘bot the size of a spare wheel – it’ll happily carry boxes around your neighbourhood’s roads and paths.

It’s not clear what’ll happen when the local yoofs try to hitch a lift, but we’d rather have a bunch of little machines trundling around than those pesky "hoverboards".

Who’s come up with this shiny robo-concept? And where will it actually work?

It’s all part of Ford’s push to reduce pollution and congestion, and the ideas have come from Ford’s own employees, who’ve been encouraged to invent and innovate. The scheme has already delivered all kinds of quirky kit, from urban tricycles to those dinky drones.

As for where we’ll actually see this ‘city of tomorrow’, it’s unlikely to come to your nearest capital any time soon – but Ford is aiming to have a fully autonomous commercial vehicle in operation by 2021, with mobility concepts such as ride- and bike-sharing already in place in cities such as London and San Francisco. Which all bodes well for speedier online ordering. 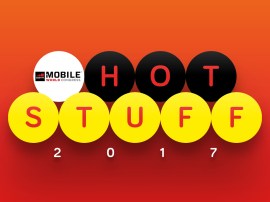