Smart lighting specialist Nanoleaf has launched Lines. The LED light bars are a new take on the wall-mounted panels that Nanoleaf is well-known for. They’re certainly more subtle than the panels which can seem a little too much for a more subtle smart home setup (you can, of course, adjust the brightness) and follow-on from the wooden Elements panels.

Costing £180 for a 9-pack or £270 for a 15 pack, the Wi-Fi-enabled Lines are designed to create an aesthetically pleasing shape on your wall – the light emits from a backlight. The Lines themselves can connect straight onto each other or at a 60-degree angle as you can see in our pics. You will also be able to customise them in future with black and pink snap-on covers.

You can have two colour zones per line and, as with other Nanoleaf products, they can react to music, movies or gaming sounds and they can even reflect what’s on your computer screen with the Nanoleaf Screen Mirror feature. There are over 16 million colours available which you can set up in the app. As usual, they’re compatible with Apple HomeKit for easy control over the Home app, too. If you’re an Android user, you can use the Nanoleaf app.

They can also be controlled with Google Assistant, Amazon Alexa and Samsung SmartThings and IFTTT. You can also set Lines up with scenes for a particular effect or colour combination (Neon Dreams and Kaleidoscope are particularly eye-catching).

As with all new Nanoleaf products, they’re compatible with both the new Thread and Matter smart home protocols – essentially the Lines are rather clever and creates its own network to connect to other compatible smart home devices (called a Thread Border Router) such as Nanoleaf’s own Essentials range. Lines will be updated for Matter next year.

As well as the starter packs, a £50 expansion pack of three Lines is available, too. 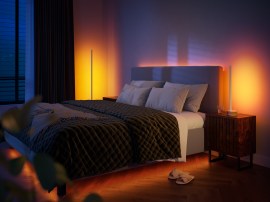