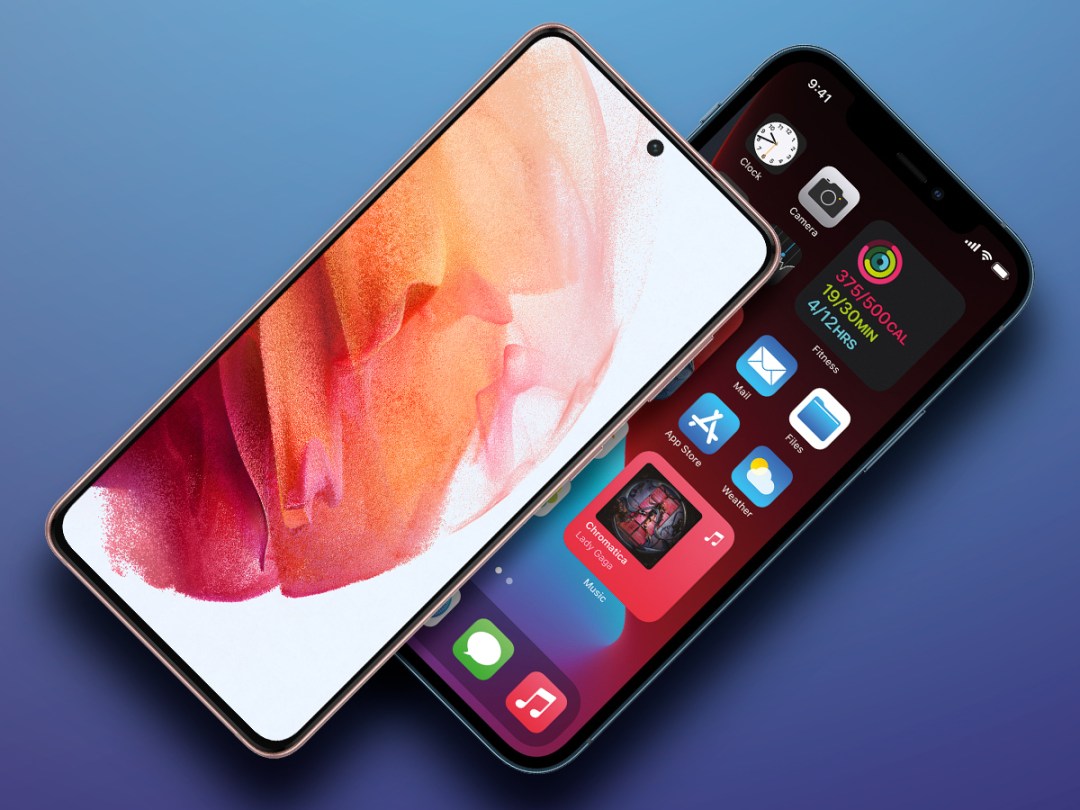 Samsung has launched its Galaxy S20 successor early this year, and along with the speedier rollout, the Galaxy S21 also makes some notable changes compared to last year’s phone.

The design isn’t hugely different aside from the noticeable camera module flourish on the back, but Samsung has made a few concessions to bring down the price. It comes at a time in which Samsung’s chief rival, Apple, is riding on the success of its best phone in years, the iPhone 12.

Is the Galaxy S21 well-equipped enough to take out the iPhone 12, or will Apple reign supreme due to Samsung’s strategic omissions? Here’s what we think so far.

The Galaxy S21 looks a lot like the phone before it, although the screen is flat this time compared to gently curved on the S20. It still has the punch-hole camera cutout at top center. On the back, you’ll find the redesigned camera module, which looks a lot more distinctive than the simple pill-shaped look from last year’s phone. Here’s a big difference, though: the Galaxy S21 has plastic backing instead of glass this time around.

Meanwhile, the iPhone 12 is like a mash-up of Apple smartphone eras, pairing the notch-driven iPhone X approach with the flat frame seen with some older iPhone models. It’s a slick look and the phone is super slim, too. The iPhone still has glass backing, unlike the GS21.

You might be surprised to hear that for the first time in ages, the base iPhone has a higher-resolution screen than the new Galaxy S. That’s because Samsung has scrapped the QHD+ resolution seen over the past several models, sticking with Full HD+ at 2400×1080. Meanwhile, the iPhone 12 has a 2532×1170 panel. Both are OLED panels, and nearly the same size: 6.2in on the S21 vs. 6.1in on the iPhone 12.

Truth be told, you probably won’t be able to tell much of a difference in crispness between the two at that size. Still, on paper, Apple wins on resolution. Where Samsung may well take the overall advantage is with the variable refresh rate, which can boost up to a silky-smooth 120Hz at times. The iPhone 12’s screen looks great, but is locked to the standard 60Hz.

You get three cameras on the back of the Galaxy 21: a 12-megapixel main sensor, 12MP ultra-wide sensor, and a 64MP telephoto zoom sensor. The iPhone 12 sticks with just 12MP main and ultrawide sensors, with no optical zoom capabilities onboard.

That’s the only obvious mark against the iPhone 12 as a smartphone camera powerhouse, as it takes brilliant stills and can shoot video in Dolby Vision HDR. We expect that the Galaxy S21 will also be an excellent shooter, building off of the great foundations of the S20 while making what are likely to be modest enhancements. We’ll have to see how this shakes out in a shootout.

The iPhone 12 has the most powerful smartphone processor on the market in the A14 Bionic, beating last year’s Android powerhouses by a solid 20-25% margin in benchmark testing. The Galaxy S21 packs the new Exynos 2100 chip in Europe and Qualcomm Snapdragon 888 in the States, and both promise notable gains compared to their respective predecessors.

Benchmark scores that we’ve seen suggest that the new S21 chips come close to matching the A14 Bionic in multi-core performance, but are still well behind in terms of single-core ratings. Ultimately, it probably won’t matter when it comes to day-to-day usage: the iPhone 12 feels super smooth and powerful, and we expect the Galaxy S21 to feel just the same.

Battery and perks: Some changes

The iPhone 12 gets surprising endurance out of a very modest 2,815mAh battery pack, delivering a solid full day of usage. But with 4,000mAh, we expect that the Galaxy S21 will feel noticeably more resilient. Both phones offer wireless charging, while the Galaxy S21 adds the ability to “reverse” wirelessly charge a compatible phone or accessory by placing it on the back of your phone.

You’ll find just 64GB in the base iPhone 12, with the option to pay for 128GB or 256GB models. Samsung’s phone ships with 128GB and you can pay extra for a 256GB option… but unlike the last several Galaxy S phones, there’s no microSD slot this time around. That means no expandable storage at all. But that’s the norm for iPhones, of course.

Neither phone comes with a wall charger, by the way. Apple made the first move last autumn, which Samsung mocked on social media… and then, in classic Samsung fashion, they’ve copied the decision. It would be funny if it weren’t so sad.

Initial verdict: Too close to call

A glance at our Best Smartphones ranking reveals that the Galaxy S20 stands right above the iPhone 12 at the top of the list… so that’s a slam dunk for the Galaxy S21, right? If this were a typical Samsung upgrade, then yes, most likely.

However, as evidenced above, the Galaxy S21 actually cuts a couple of corners while making the usual set of upgrades. It has plastic backing now, sheds the super high-res QHD+ panel, and even loses the microSD slot in the process. On the upside, that has dropped the base model down to £769, which beats the iPhone 12.

Not by much, though: Apple’s phone is only £30 more. On paper, you could make the case that the Galaxy S21 still has more perks onboard, but not as many as in years’ past. And the iPhone 12 has more advantages on paper than previous showdowns. We can’t make up our minds for sure until we properly test the Galaxy S21, so stay tuned – but there’s a real chance here that the standard Galaxy S21 won’t feel like as much of an upgrade as usual.