Home / Features / Opinion: If a new Nokia 3310 is so exciting, why wouldn’t anyone buy my old one for a fiver? I was once a holdout. I’d decided mobile phones were a kind of modern-day evil, and resolutely resisted buying one.

That line of thinking abruptly vanished when, soaking wet from traipsing across London from a friend’s apparently empty house to the nearest phone box a mile away, I called said friend. “I’m at the house,” he said, having shown up in the interim. “Where are you?” I mentioned the payphone and the rain and trailed off. He mentioned I was a massive idiot for still not having a mobile phone.

But if you’re thinking this tale of irrationality and asininity will now dovetail into a rose-tinted celebration of all things 3310 – enthusing about how glorious it is the little phone is about to make a comeback – guess again. After all, Stuff’s already done that.

Moreover, on the ‘cravings scale’, I’d place revisiting the 3310 somewhere between the return of the Black Death and new episodes of Johnny Vaughan sit-com ‘Orrible.

You see, the tiny snag with the Nokia 3310 is that it’s rubbish.

Sure, people will happily bang on about the amazing battery life compared to smartphones, but that’s only because they’re using their smartphones all of the time. If you could set up your iPhone or Android so it’d unleash a blood-curdling scream every time you unlocked it, you’d use it far less, and its battery would last for ages. Instead, you spend all day on Facebook and Twitter, tapping out text messages, playing games, taking photos, and marvelling at having a tiny, hugely powerful computer that fits in your pocket.

To which I reply: get some self discipline, then. And also, if you really don’t think a 3310 will leave you cut off in the modern world you’ve existed in for years now, you’re half right, in that you’ll still be able to phone or text people. But that’s not going to be much use when you’re stranded in the middle of nowhere, the heavens have opened, there are no taxis, and you discover yelling “UBBBEERRRR!” at the top of your lungs isn’t nearly as effective as ordering a car using the smartphone app.

But the arguments continue to rage. “It’s unbreakable!” Then buy a case for your smartphone. “It has real keys!” Because we’ve all missed pressing 7 four times to type an S so much. “I think you’ll find technology was better in the old days, and along with endorsing the Nokia 3310, I’d like to extol the virtues of cassette tape as the finest vessel for recorded music!”

Thanks, but I’m not taking advice from a Hipster recommending a format that regularly got eaten by the device designed to play it.

And just before this little whirlwind of nostalgic excitement swept through Tech Land I couldn’t even sell my old one for a fiver on eBay. I tried. Twice. Makes you wonder where all of these people who are apparently prepared to pay £50 for a new one were then.

I’ve since recycled it, by the way, showcasing that my timing’s no better than it once was – given the furore surrounding the ‘new’ 3310, I might have made a killing.

Still, at least I have my iPhone. Think about that when you’re lost, your retro Walkman has just eaten your favourite mix tape, and you’re peering sadly at a Nokia 3310, trying to magic Google Maps on to its pathetically tiny display.

Fit parade: the 11 best tips and tricks for your new Fitbit 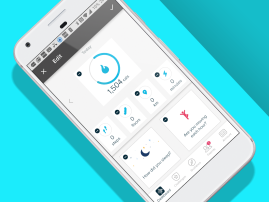