Whether you’re a seasoned jet-setter with a stamp-laden passport, or a green-horned explorer looking to expand their horizons, there’s a piece of luggage out there with your name on it. At least, there will be, once you fill in the name tag. Here’s our guide to the best carry-on cases.

Trouble is, there are a lot of suitcases out there, and they’re far from equal. Sure, you could spring for any random one that crosses your path, but chances are you might regret your purchase when you’re left with a ripped, wonky-wheeled case in the middle of a monsoon. And as you mop up the ruins of your life with your second-favourite pair of boxers, you wonder where it all went so horribly wrong.

It’s a sign, you think to yourself. You should have never come on this trip. It’s too soon after the breakup. Travel the world and find yourself? Hah. You couldn’t even find a bag that survived the bus journey from the airport. And now look where you are. You’re soaked to the bone and your zipper is stuck. Where did it all go so horribly wrong?

Anyway, we’ve put together a list of some of the best smart carry-on suitcases — aka, ones that are crammed with clever tech like built-in chargers and GPS smarts— to help ensure that your next trip goes as smoothly as possible.

Before we crack on though, it’s worth noting that since January 2018, airline regulation rules state that any tech-laden luggage with charging capabilities must have a removable battery to be accepted, as battery packs aren’t allowed to be checked in. All of the items on this list fit those criteria, but as always, it’s best to check with your airline ahead of time. #duediligence.

With that said, here are the best smart suitcases :

Before we dive into the full list, here’s a quick look at our three top picks:

Our roundup of top carry-on cases:

Away The Bigger Carry-On With Pocket

Away’s handsome offering — The Bigger Carry-On with Pocket — is aptly named. At the larger end of the carry-on spectrum, it should comfortably fit everything you need for a week or more, depending on how light you travel. This particular model has a leather exterior pocket, making it ideal for storing laptops, tablets, and documents for quick and easy access.

Your precious cargo is protected by a sturdy polycarbonate hard shell that promises to handle all the knocks and bumps that travel tends to bring, and there’s even a built-in, TSA-approved ejectable battery pack for convenient device charging that complies with airline regulations.

Throw in a TSA combination lock, whisper-quiet 360-degree wheels, and a hidden, water-resistant laundry bag, and you’ve got yourself a do-it-all suitcase that oozes class. Just be wary that if the front pocket is particularly full, you might struggle to squeeze it in the overhead compartment on some smaller planes.

Engineered in Germany, Horizn Studios’ 33L, 3.6kg M5 cabin luggage is one of the more handsome suitcases we’ve come across. Available in a plethora of different colours ranging from plain black and light grey to sand and marine green (pictured above), it offers a decent level of customisation too. You can take things a step further by creating your own custom model, letting you select your preferred colours for the body, handle, wheels and more, though this will cost extra and delay delivery times.

Looks aside, it’s made from a premium, partially recycled polycarbonate hard shell, with a front pocket made of Vegan Hi-Core and nylon, with a recycled polyester lining on the inside. Four 360-degree Japanese spinner wheels make for a smooth glide across airport floors, while a TSA lock lets US security peek inside without having to resort to breaking and entering measures.

The front laptop/document pocket is water-resistant for peace of mind, and there’s also a one-click removable smart charger for letting you juice up your dying tech while you’re on the go.

Samsara’s sturdy 4.9kg Grand Carry-On will turn heads in its bright yellow flavour, letting you easily keep tabs on it at a glance. Its standout party trick though is its built-in Apple AirTag compartment, which lets you safely and securely slot in the included AirTag so that you can safely track its whereabouts.

While there’s no built-in battery pack or USB charging ports, its top has been specifically designed to offer a stable platform for your laptop when shut, letting it double up as a portable travel desk for work or watching films during a delayed layover.

One of the more robust offerings on this list, its reinforced frame and telescopic handles are made from hardy aluminium, while the usual TSA lock and 360-degree wheels are included as standard. Oh, and it’s also available in black or white, if you prefer something a little more subtle. Just double check shipping costs and delivery times from the US when you order though, as it’s not sold directly on UK shores.

It might sound like the name of a Wild West outlaw, but Wrangler’s El Dorado is a rather sophisticated bit of kit, with a built-in USB port for quick and easy device charging. Unlike some of the more expensive suitcases on this list, you’ll need to supply your own battery pack, but with plenty of options out there, it’s not the end of the world.

Unlike the rest of the competition, it also sports something we’ve never seen on any piece of luggage before — a built-in, collapsible cup holder for hot and cold beverages. It might seem silly at first glance, but when you’re weaving in and out of the crowds with your venti mocha nestled securely while your hands are free, your smugness will know no bounds.

Weighing in at just 3.1kg with a 20in height, it’s a dinky little number too, ideal for short trips and tiny spaces. And if you’ve over-bought souvenirs and office snacks, it can expand for a little extra room too.

We’re not going to make stereotypical, over-used jokes about bowing to our robot overlords when the apocalypse comes. Instead, we will merely state that we really appreciate the SR5’s ability to follow you around automatically, courtesy of its built-in electric motor, obstacle detection sensors, and wrist-band tracking smarts.

Its 20in length makes it suitable for overhead compartments, while a handy smartphone app allows for remote control functionality, as well as the ability to hunt it down if it goes AWOL, with a proximity alarm thrown in for good measure. If a nefarious thief decides to make off with your bag while it’s dutifully following you, the included wristband will also buzz to alert you.

Naturally it has a USB port for easy device charging, but there is a cost for all this tech — it weighs in at a rather hefty 6kg when empty, which might be too much for some travellers to swallow. Still, at least it’ll cart around its own weight most of the time.

Arlo Skye is the kind of moniker that could belong to a young up and coming Grammy nominee, but it is in fact the name of a US-based high-end luggage purveyor. The Frame is a hybrid carry-on suitcase forged with an aluminium frame and a polycarbonate exterior — as a result (and despite its capacious 40L capacity), it weighs in at a respectable 3.85kg, while serving up a robust build in the process.

All the bells and whistles you’d expect at this higher price point are present and accounted for, including a removable battery pack (complete with USB C and A ports), a sturdy TSA clasp lock, super-quiet wheels, and reinforced corners for extra toughness.

There’s even an anti-microbial lining infused with natural silver fibres to neutralise odour-causing bacteria and prevent germ growth too, which is a welcome feature for longer trips without access to laundry facilities.

Despite being the cheapest entry on this list, the Kono cabin suitcase has plenty going for it. It’s under £70 at the time of writing, for a start, saving you precious cash for other expenditures like camel rides, beer, and questionable souvenirs.

Price aside, its 2.36kg weight is easily the lightest of the bunch, while its 33L capacity is rather impressive too. Naturally, you’re getting a thinner, less robust polypropylene body (compared to aluminium) for this price/weight combo, but if you’re not planning on trekking across treacherous terrain and just need something light and large for city breaks, this should have you comfortably sorted.

There’s a built-in USB charging port for hooking up your own battery pack to, along with an adjustable three-level aluminium telescopic handle, TSA locks, and four 360-degree wheels. Throw in a two-year warranty for peace of mind, and it’s well worth a punt at this price.

Check your baggage: 10 of the best suitcases, backpacks and duffel bags

Upgrade your holiday haul with these clever carriers 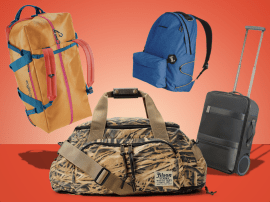 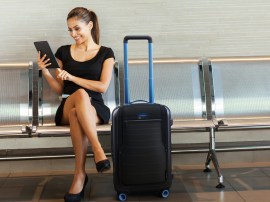