Atari. For gamers of a certain age, those five letters will hit their nostalgia nubbins in a big way. This was a company that blazed a trail in home and arcade gaming, flinging out hits at a rate of knots.

With the company celebrating reaching the grand old age of 50 today, Stuff fancied digging back through the decades for five pieces of landmark hardware that best summed up the company’s achievements.

Pong wasn’t the first attempt at videogame tennis. In 1958, boffins got Tennis for Two up and running, letting all-comers at a public expo unleash their inner Althea Gibsons and Pancho Gonzaleses. In 1972, Atari took its version of two-player bat-and-ball larks beyond the lab, and stuffed it inside an arcade cab.

Savvy Atari co-founder Nolan Bushnell saw the potential for Pong to go further and in 1974 ordered his company’s own boffins to shrink it down to work as a TV game. Resellers initially baulked at the high unit cost and didn’t think the public would care. They were wrong.

Smartly recognising that families wouldn’t buy new hardware every time they wanted to play something new, Atari set about creating the Atari 2600 (or VCS), which popularised the use of game cartridges. The snag: the hardware was largely designed to play Pong variants.

Still, programmers increasingly managed to eke out surprisingly complex and vibrant games from the simplistic hardware. Some even devised early expansion chips, like the one in Pitfall 2, which boosted the game’s audio output.

Titles continue to be released for the console to this day, including from Atari’s own Atari XP imprint.

If you were around during the mid-1980s, you’ll have fond memories of Amiga and Atari ST owners kicking each-other’s faces off, the former screaming “Babylon 5!” and the latter yelling “MIDI!” until hoarse. Objectively, the ST was the lesser computer – but it was nonetheless a sterling success.

Prior to its arrival, Atari had bungled multiple hardware releases, resulting in a confusing pile of consoles and home computers that sold poorly. The ST felt like a fresh start, and its lowish price tag helped it secure a foothold in the market until the twin behemoths of the PC and 16-bit consoles casually waved away everything that had come before them.

It’s quite something to note this handheld showed up before the Game Boy’s European release – and under five months after the Japanese one. And yet, unlike Nintendo’s pocket-friendly marvel, the Lynx had a full-colour display and hardware capable of dazzling tricks, as shown by After Burner wannabe Blue Lighting.

The tiny snag was it was expensive and comparatively bulky, ate batteries at a terrifying rate, and didn’t have Tetris. Undeterred, Atari introduced a smaller, lighter, more battery-friendly successor in 1991. It wasn’t enough to defeat the big N, but Atari’s handheld still has a keen following, and many of its titles have found a second life on the Evercade.

Atari’s hardware ambitions hurled themselves into a ravine with the misfire that was the Atari Jaguar. From then on, the brand hopped from owner to owner, mostly being a badge attached to retro hardware of dubious quality.

In recent years, there was the odd hit – notably the AtGames Atari Flashback – but with the Atari VCS, Atari made its own hardware again, blending the original’s wooden stylings and internals capable of playing modern games.

Although limited in use and no sales breakthrough on par with its 1970s ancestor, the revamped VCS was a nice curio for mega-fans. And given Atari’s mixed success with consoles, it’s a suitable footnote if no further hardware arrives from the company. 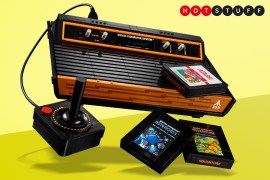