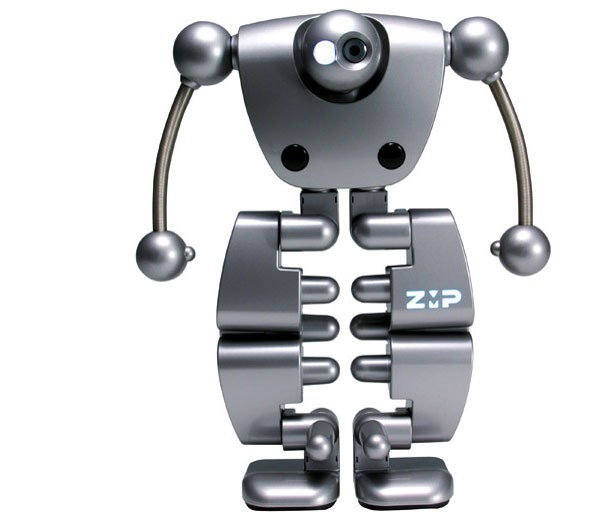 Like a phoenix rising from Aibo’s flames, Nuvo has taken on the mantle of ‘cleverest consumer robot’ but in humanoid form, as opposed to Sony’s Scrappy-Doo canine design.

With an eye-watering price, does Nuvo do enough to impress? We’re far from the age of truly useful household robots but we do expect some cleverness for our money…

At the heart of any good robot is an array of sensors. Nuvo has an obstacle sensor to stop him running into things, various sensors to help him stay upright and a microphone so he can hear voice commands such as ‘Nuvo, go forward’. The voice recognition isn’t too bad but there’s a remote control if he’s having hearing problems.

With a walking speed of three metres per minute, Nuvo is pretty nippy. He’s the hare to Aibo’s tortoise, although it’s slow and steady that wins the race because, while Aibo is comfortable on most surfaces, Nuvo needs hard floor or he’ll fall over. The irony is that you’ll be more worried about him on the hard stuff, as a fall would chip that paintwork something chronic.

If he just sits around doing nothing, you can squeeze almost two hours from his rechargeable battery. With active use, getting him to walk around, take photos and perform tricks, you’ll be lucky to get an hour. Unlike Sony’s Aibo, he doesn’t have a charging station to go back to, either.

Of Nuvo’s two eyes, only one is for seeing – a beady little VGA camera, to be precise. The other is a status light that changes colour to indicate he’s either understood a command or doesn’t have a clue what you’re talking about.

If he’s in a dark room, you can crank up the power of the LED so he can use it like a headlight.

Thanks to Wi-Fi, you can connect Nuvo to your home network and control him from a computer or mobile phone with web access. Actually setting him up for wireless connection is a fiasco, requiring an Ethernet cable and knowledge of your IP address, SSID, etc. Once that’s sorted, enter his IP address into a web browser and log in.

From the main control screen, you can see a picture of what Nuvo’s seeing. The quality of the image is rubbish and updates slowly. There’s also a list of commands, so you can make him walk around, look in different directions or perform moves from his repertoire. He’s quick to respond at first but you’ll grow old and die between actions.

From the control screen you can also get Nuvo to take some photos. Having told him to capture a few snapshots around the house – assuming he hasn’t taken a tumble along the way – you can take a look at the pics as a series of thumbnails or download them to an FTP server. You can also set up a little slideshow.

The images from the 0.3megapixel camera are poor, dark, VGA fare and, to make things worse, he can store only 100 pics in flash memory – no removable storage.

You can turn his headlight on to brighten things up but it’s a token gesture and doesn’t make much difference to objects more than two feet away. This could be the world’s most expensive webcam.

It’s an odd choice but Nuvo can actually play a game of Rock, Paper, Scissors. There he goes, shaking his little fist up and down a few times before presenting his weapon of choice. Shame it always looks like stone, as he has no fingers.

Like Aibo, Nuvo can also strut his funky stuff on the dancefloor. He does a little twisting while flailing his arms around. As you’d expect, he looks very silly, like a pensioner trying to jive à la Travolta, but it’s still a good one to show your chums. More disturbing is his bloodshot eye, as though he’s had one too many tequilas on his way to the dancefloor.

Nuvo can pick himself up, whether he’s on his back or front. When on his front, he flips his legs over his head to lie on his back, then uses his arms to push himself onto his feet. It’s his best trick by far and the one that makes his price tag seem just a touch less exorbitant.