It’s hard to believe that one sexy speaker can spray virtual sound at you from every angle, but such is the mind-bending technology involved, Yamaha’s home cinema sizzler is able to output great wraparound sound.

The speaker excels when whacked up to a decent level – pouring out silky smooth and significantly less brittle sound that its predecessors. And at high volumes the surround dynamics and subtle intonations penetrate through to the listener far easier.

The YSP-900’s bigger brother undeniably provides a superior surround-sound experience, but you’re going to have to shell out an extra £300 to bag it, and if like most of us you have limited space, there’s frankly no need.

There’s no questioning the YSP-900’s performance in tighter environments. Power up your favourite action flick, and you’ll be warmly embraced by rich, textured omnipotent audio.

But although the YSP-900 wails as hard as a Hendrix solo at Woodstock in smaller rooms, if you place it in your grand hall it’ll start to whisper like Enya in a library. But perhaps that explains why Yamaha specifically states the YSP-900 is designed to court a TV no bigger than 32 inches.

Still, it’s unquestionably one of the best sounding DSPs on the market, and though it may not be able to reign in the satellite speaker competition, for the price you’re bagging some great kit with an automatic setup, on-screen displays, and a whole host of audio and video inputs.

Bose’s Smart Soundbar 900 goes all in on Dolby Atmos 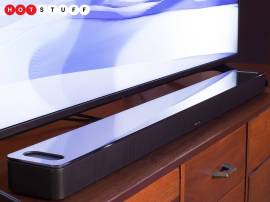 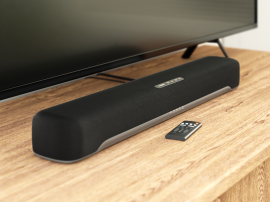