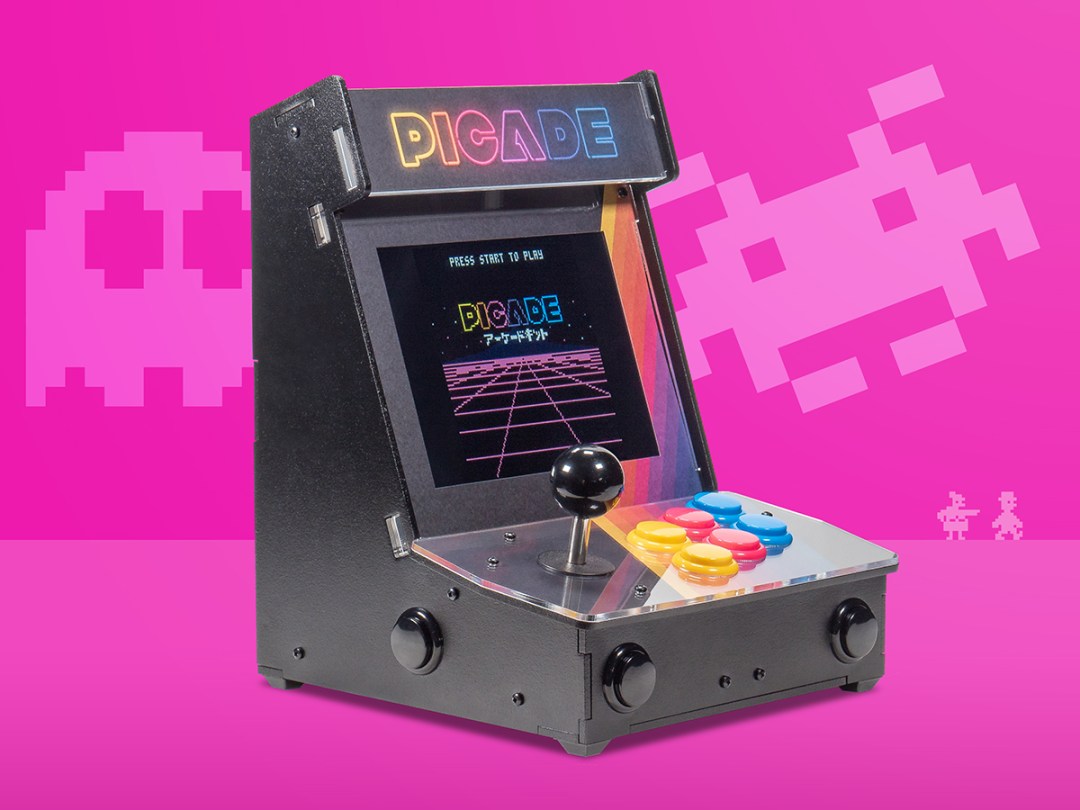 My earliest videogaming memory involves my dad lifting me up to play Space Invaders on a cabinet in a ratty arcade (and him instantly regretting doing so, because I was quite good and took ages). Even today, cabs to me have an allure home computers and consoles can’t compete with. Of course, an original cab demands a ton of cash to buy and space to store. Fortunately, Picade requires far less of each and yet gives you a taste of gaming’s past.

Glue a couple of iPads together and you’d roughly have the front dimensions of this desktop arcade machine, which is designed to work with a Raspberry Pi running RetroPie. When playing games, you get a bright, clear 1024×768 ISP display, and a surprisingly decent 5W speaker for bleeps and blurps. Your hands are kept busy with a chunky joystick and ten configurable buttons.

At least they are after you put the thing together – because Picade is the retro-gaming equivalent of IKEA furniture.

Given that third-party Pi kit can be of variable quality, the Picade packaging is deeply impressive. This might seem an odd thing to enthuse about, but it feels properly high-end and – more importantly – all the various bits are in clearly labelled colour-coded boxes. You’ve only yourself to blame if you mix everything up during construction.

In fact, creators Pimoroni have throughout very obviously tried to make building the cab as approachable as possible, even for a sausage-thumbed Stuff contributor. I’m happier with a Mac than hacking together a PC. My limit these days is whacking the odd SSD into old Mac laptops. So I was a touch sceptical, when staring at a pile of parts, with the claim I’d need only a couple of screwdrivers, a pair of pliers, and a few hours before I’d be immersed in retro-gaming bliss.

The bundled instructions are decent enough, but the online video tutorials are the real deal, enabling you to follow along live as someone puts their own Picade together.

I had the odd hairy moment. The screws not being marked is… unhelpful. I bent some pins in a way I’m sure they weren’t expecting – but they went back OK. Ish. And I got cocky at one point while shoving connectors into the speaker terminal, prior to reading “don’t press the clips too tight, as this can break them”. Oops.

Still, the Picade somehow powered up first time rather than blew up. Feeling smug, I then realised the screen was upside-down, which was swiftly fixed via a speedy trip to Google and then the command line. One installation of RetroPie later and I also realised half the controls didn’t work – although this was easily dealt with by taking the back off the Picade, and swapping some wires around.

It was then time to play – and I was impressed. Sure, it can be a faff to get the software side of things working, but once you’re up and running, everything is really nice. The clicky joystick feels solid and sturdy, and although the buttons are silent, they’re responsive. The screen’s pretty great, despite sitting behind reflective perspex. (You might want to dim the lights – and then trample cheap soda and candy into the floor, for that fully authentic arcade feel.)

There is, however, a very homebrew feel to proceedings. The card screen surround looks a bit rough, and although the EmulationStation front-end is usable, it’s not a patch on the polish found in the slew of mini consoles that clutter up shelves in high-street stores.

BUT! Picade feels better than any of those units, and it’s far more versatile. You can upgrade the screen, and use alternate arcade buttons. I’ve left a USB keyboard attached for ZX Spectrum and C64 action, and added a Buffalo gamepad for systems that don’t gel with Picade’s more arcade-oriented controls.

All told, with a Pi, power supply and SD card (all of which you must supply), the entire set-up’s kicking on the door of 200 quid – or 250 with the 10in version – just to play some old games. That – and the hassle of building the Picade, if that’s not your bag – might put you off. But rather than a closed box, you get the freedom to explore gaming history as you see fit, using a superb dedicated set-up – as long as you’re willing to get your hands dirty – and that’s a great thing.

An endearingly over-the-top and extravagant means of transforming a Pi into a tiny arcade. But it’s so good.

Components can be upgraded

A few hairy moments during construction

Software set-up can be a faff