Is it a T. rex? Is it a space rocket? Is it a giant ham? No. It’s Mario with a magic hat that can possess pretty much anything.

That’s right, Super Mario Odyssey is a game where your favourite dungaree-revivalist is no longer limited to his mortal coil. Just chuck his cap at a friend or foe and chances are he’ll assume their bodily form. Your imagination is the moustached hero’s only obstacle in a dizzying adventure that globe-trots from prehistoric ruins to a land of anthropomorphised forks and beyond.

Except for Bowser who’s gone and kidnapped Princess Peach again. Because some things never change. Make no mistake, Mario’s debut on Switch is a barmy reminder that no one makes platformers quite like Nintendo.

Over the past 30 years or so Mario’s been a medical professional, Olympic athlete and graffiti removal expert. Yet those outings seem positively humdrum when compared to the pandemonium that takes place in Odyssey.

Much like this year’s Zelda: Breath of the Wild, this 3D successor to Super Mario 64 and Sunshine plonks you down in a giant world and challenges you to explore its every nook and cranny. Unlike Breath of the Wild, you’ll do so while wearing a talking hat who can help you subsume the consciousness of other living creatures.

This chap’s name is Cappy, and he’s the reason why Odyssey is such a blast. You see, as well as allowing Mario to capture (geddit?) the ludicrous array of creatures around him, Cappy doubles up as all manner of other things from a makeshift weapon to an impromptu petting toy.

Without Cappy, Odyssey is another well made Mario game. With him, it’s a whole new leap forward for a series that’s already enjoyed more than its fair share of madcap adventures. I mean, you start out by possessing a frog and things only get weirder from then on.

While Cappy is by far the most noticeable introduction to Odyssey there’s plenty more that’s different. Mushrooms are no longer used to power-up your health, it’s impossible to hit a Game Over screen and you’ll switch between multi-coloured costumes every half hour or so.

Crucially, there’s still enough of the old Mario games in Odyssey to ensure you’re not completely bamboozled by it. Anyone who’s played his recent 3D World or Galaxy outings will be familiar with both his controls and impossibly acrobatic move-set. The only Italian who can dive around with more panache than this plumber is Gigi Buffon, and this means even absolute newcomers should be stomping their way around the place in no time.

Truth be told, Odyssey is quite an easy game until you’ve shown Bowser what for. It’s early delights are found having in larking about and uncovering its many hidden delights. What happens if I leap down this 8-bit-shaped pipe? How many Goombas can I stack on top of each other? What does Mario look like when dressed up in a clown’s hat and boxer shorts? Side-splittingly ridiculous it turns out.

There’s never a dull moment thanks to this tremendous sense of scale and invention. Every surge of jubilation that comes with uncovering a new Power Moon only serves as a further incentive to rush out and find another one.

Stringing together this litany of joyous moments is Odyssey’s travelogue-style structure that sees you jaunting across the globe in chase of Bowser and his minions. While this setup delivers the usual array of sand, fire and ice-themed levels, there are several more imaginative offerings tucked in between them too.

Chief amongst these is New Donk City: an awesome homage to both NYC and the original Donkey Kong that’s stacked to the max with genius tidbits of fan service. For example, the city’s mayor is the same Pauline that Jumpman (a.k.a. Mario) tried to rescue way back in 1981. If you hadn’t already grasped the sheer scale of Odyssey’s inventiveness before reaching this bonkers metropolis then you soon will. It’s a concrete playground that lets you climb to the very top of the Empire State Building before diving back down to the ground to assume control of a fire hydrant. Just try doing that and not cracking a toothy smile to rival even Bowser.

With each of Odyssey’s many kingdoms boasting its own unique art style and array of challenges, it’s no wonder this game comes with an inbuilt Snapshot mode. Moments like rounding up stray sheep in the middle of a desert or pursuing Romeo & Juliet-style romance with a balcony-bound lady Goomba deserve to be preserved for posterity, so this photo mode allows you to pause time, frame your shots and apply one of a huge number of Instagram-inspired filters to them. You can make your snap look as though it was taken via a SNES, fisheye lens or pinhole camera, and then share the results to your phone.

My best picture so far? A black and white shot of Mario and a dog both wearing trilby hats as though they’re a film-noir detective duo.

It’s the relentlessly brilliant variety that elevates Odyssey above and beyond any recent platformer you can care to mention, and a fair few other Mario games as well. Racing towards a distant flagpole is all very well, but this feels like a proper 3D affair in the same way that Super Mario 64 did two decades ago. Only now you can play it wherever you please thanks to the Switch’s portable charms.

So yeah, Super Mario Odyssey is an incomprehensibly fun video game. One that’s big and silly and totally essential if you’ve already got a Switch sitting at home. Not only does it show off what Nintendo’s new console is capable of, but it reminds you why Mario has endured for so long now: roaming free with the fella around the vast new kingdoms just feels great.

Not yet indulged in a Switch? Odyssey is good enough to have you reconsider. I mean… Mario as a T. rex: what more excuse do you need?

Cappy changes how you play

A bit easy at first 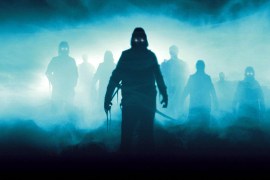